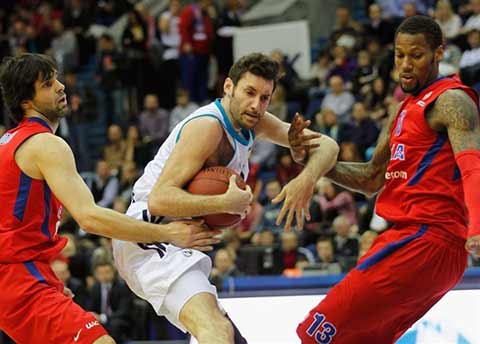 As the Euroleague Top 16 round began, it was clear that Real Madrid was going to end up somewhere at the top Group E after they went 6-0 before losing their first match to Anadolu Efes. Three consecutive wins later they sported a 9-1 record and a two game lead on CSKA Moscow, who was 7-3. On Thursday, CSKA came out of their most recent game with Madrid on top of the group after taking down the Spanish club, 81:72, and also winning any tie-breaker with them by a single point. The loss for Madrid is their third straight in Euroleague Top 16 play, having previously fallen to Unicaja Malaga and Panathinaikos Athens. CSKA has unfinished business in the Euroleague having lost the Final against Olympiacos last year, their current five game win streak in the Top 16 is a solid indication that they are ready to take on all comers to avenge that loss.

Further shaking up the top half of the group, this season’s surprise club, Anadolu Efes, lost a tough contest to Unicaja Malaga, 64:70 at home. The two came into their Week 13 match-up tied in the standings with CSKA Moscow at 9-3, after CSKA’s win over Madrid and Unicaja’s defeat of Efes, CSKA moves to the top of the group at 10-4, while Efes and Madrid move into a tie for the No. 2 spot tied with Panathinaikos, who beat winless Brose Baskets, 60:82, to grab the final playoff spot from Group E, locking out Unicaja. Efes currently leads Madrid by two points in their series, having been the first club to take down the Madrid in Top 16 play this season. The two will wrap up this round with a Week 14 contest in Madrid. CSKA concludes with Panathinaikos, a club they defeated at home by 17 points in the first round of play in the Top 16. The final game of the day was a Maccabi Electra’s 43-point beating they handed Besiktas JK in Tel Aviv.

CSKA Moscow – Real Madrid, 81:72
CSKA Moscow was able to easily handle struggling Real Madrid on Thursday with an 81:72 win at home to take over the top spot in Group E. The hosts were able to build a lead that peaked at 18 points before Madrid was able to reel them back in the fourth, cutting off seven from their deficit. Real Madrid drops their third Top 16 game in a row and has gone from two games up on CSKA at the end of the Week 10 with a 9-1 record to 9-4 and tied for second with Efes and Panathinaikos. Sonny Weems led CSKA with 21 points, while Rudy Fernandez dropped in 24 for Madrid (30 PIR).

The hosts set the tone early, jumping out to a 24:15 lead after the first 10. The Russian club came in with a new look line-up, swinging Weems to point to put more size at the top along with Milos Teodosic. Between the two, they dropped in six points on their first three trips down the court. CSKA was up 17:6 seven minutes into the quarter, before Fernandez dropped in a triple and then hit a pair of singles, while Felipe Reyes connected on a deuce to cut the CSKA lead from 11 to 7. Weems then dropped in a jumper at the buzzer to put the lead back to nine heading into the second.

Madrid scored first to open the second, but Weems hit two consecutive jumpers to give CSKA a double-digit lead again. Slaughter picked up a dunk to cut the lead to nine again, then the hosts ran off eight straight to build their advantage to 17. At the end of the half CSKA was up 16, 44:28.

Weems got the first points of the second half when he sliced the cords with a triple, extending the CSKA margin to 19. Fernandez countered with a three-ball of his own, starting an eight point run by Madrid to pull to within 10, 47:37. To finish the third CSKA went on an 8:2 run to keep the lead at 16, 63:47.

Madrid opened with the first three points, then the clubs went through a rapid fire exchange where they alternately hit six straight shots between them. It was to Madrid’s advantage as the knocked down two triples in the exchange and ended up cutting their deficit to 12. Shortly after they went on a 2:9 run to pull to within seven, 74:67, with just over a minute to play. CSKA then hit four straight and closed the door on any full comeback and giving the Russians the top spot in Group E.

Anadolu Efes Istanbul – Unicaja Malaga, 64:70
Unicaja Malaga did what they needed to do to keep their playoff hopes alive with a 64:70 road win over Anadolu Efes, pending the results of the Panathinaikos-Brose Baskets contest. The win for Unicaja was their fifth straight, while Efes was handed their second straight loss. Unfortunately for Unicaja, Panathinaikos defeated Brose 60:82 in Germany and locked up the final Group E playoff slot and shutting the door on Malaga.

The contest was close after the first quarter with the guests getting a slim three-point lead, 16:19. Efes took over in the second quarter on the strength of a 12:1 scoring run to open the quarter, getting up 27:20. Shortly after the guests ran off six unanswered to pull to within one, 29:28. Efes connected on the last four points of the half with a pair of singles and a buzzer-beater by Jamon Lucas, to head into the break with a 33:28 advantage.

Unicaja opened the second half with a 0:9 run to go up 33:37. Jordan Farmer broke the Efes scoring drought four minutes into the frame with a triple, which was countered by Marcus Williams. The clubs exchanged baskets through the rest of the frame, with Sasha Vujacic connecting on a triple just before the horn sounded, cutting the margin to three, 47:50.

Efes took the lead back four minutes deep in the quarter by hitting four straight to go up 53:52. Unicaja tied it up with a free throw and then the hosts hit five straight to get up 58:53. Shortly after Unicaja got a pair of free throws from Txemi Urtasun and then a driving layup from Luka Zoric to pull to within one, 60:59 with just over three minutes to play. The game turned around when Zoric had his layup blocked, but he got his own rebound and dropped in the follow-up, then the next trip down the court Williams hit a layup. Efes missed on two free throws and Williams took advantage with a fast-break layup to complete a 0:6 run that put the guests up five, 63:68. The last points were tallied on free throws to give Unicaja their much needed win, 64:70.

Brose Baskets – Panathinaikos Athens, 60:82
Panathinaikos secured the final playoff spot from Group E with a sound win over the still winless Brose Baskets, 60:82. The win prevents Unicaja from sneaking in the back door by keeping them two games down on the three clubs tied for second place behind group leader CSKA Moscow. Jonas Maciulis led the way for the Greens with 24 points and a PIR of 26.

The guests lead tip to buzzer with the exception of at 3:2 on a Casey Jacobsen triple. By the end of the first quarter they led 16:26 and at the end of the first half the margin was 15, 27:42. The Greek club cruised to the win in the second half, while adding three points to the lead in the third and four in the fourth to end up with a 22-point winning margin and their invitation to the quarterfinals.

Maccabi Electra – Besiktas JK, 101:58
As Week 13 began, four clubs in Group F were tied for the No. 2 spot in the group with 7-5 records. Maccabi Electra, playing the only Group F game on Thursday against group cellar-dweller Besiktas, sent a message the other three clubs that they aren’t going to leave their fate up to anyone else and destroyed the now 1-12 Turkish club, 101:58.

Electra put five players in double figures, including 16 points and 9 rebounds from Devin Smith to accumulate a PIR of 27 and take the lead in the Top 16 Week 13 MVP race. Teammate Ricky Hickman also accounted for 16 points, as well as 3 rebounds, 5 assists, and 2 steals, which gave him a PIR of 25 on the week.

Besiktas got 12 points, 7 rebounds, 4 assists, and 3 steals from Ricky Minard.