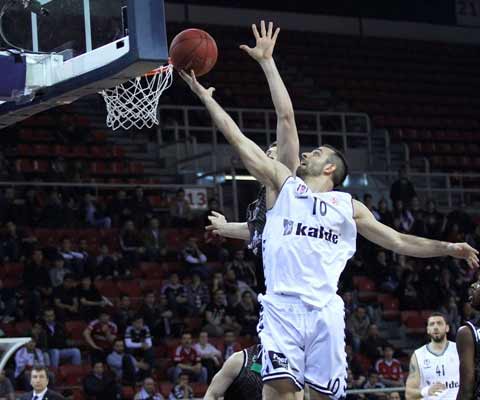 It took them 12 weeks of Euroleague Top 16 play, but Besiktas JK Istanbul have finally earned their first win, at the expense of Montepaschi Siena, 74:72. Siena’s loss and the Maccabi Electra’s win over Olympiacos puts the two clubs in a tie for the second spot in Group F with two other teams, Khimki and Olympiacos. Siena ends the season with games against Barcelona Regal and Caja Laboral, Maccabi ends with Besiktas and Barcelona Regal, Olympiacos have Fenerbahce Ulker and BC Khimki MR, and Khimki has Caja Laboral and Olympiacos. Four teams, three spots up for grabs.

If the season were to end as of Friday’s games, the teams would line up in this order based on the tie-break rules (competition with all the tied teams):
Olympiacos – 3-2 (has to play Khimki yet)
Maccabi Electra – 3-3 (wins tie-break with Siena)
Montepaschi Siena – 3-3
Khimki MR – 2-3 (has to play Olympiacos yet)

The last two weeks of Euroleague Top 16 competition have been set up to be critical in determining the final four quarterfinal slots.

Besiktas JK – Montepaschi Siena, 72:70
Besiktas gave the 2,750 fans that showed up at Abdi Ipekçi Sports Hall the thrill of the season as they took Montepaschi Siena to the last tenths of a second before Tutku Acik sank a layup to put the Turkish club on top of a Top 16 score for the first time. The win bumps Besiktas’ record to 1-11, while it drops Siena to 7-5.

The first half was a battle between the two clubs as they exchanged the lead throughout the entire 20 minutes. Neither team could build a lead more than four points, by the time the horn sounded to end the half, they had played to a 35-all tie.

The second half started the same with the clubs exchanging baskets until Siena went on a 0:8 run to build a seven-point lead, 39:46. The hosts were able to pull them back, but then they started trading hoops again and by the end of the third, the margin was five, 48:53.

Mid-way through the fourth Acik sliced the cords with a three-pointer to knot the score at 59. Shortly after Siena got five straight off a deuce by Bobby Brown and three of four free throws from Daniel Hackett and David Moss, putting them up 61:66. Besiktas got back-to-back three-pointers from Serhat Cetin and Damir Markota to retake the lead, 66:67. Brown sank a pair of free throws to take the lead back, then Cetin tied it back up at 68 when he split a pair of singles. Kristjan Kangur hit a jumper for Siena to get the lead back at 68:70. Acik dropped in a layup to tie things back up at 70 with 45 seconds to play. Kangur missed a jumper on the Siena end of the court and Acik was able to again split the defense to get a layup to fall with 0.6 seconds on the clock. Siena was able to get the ball to Brown in time for him to put up a jumper, but he came up empty to preserve the hosts upset.

Brown led the way for Siena with 19 points and 8 assists. Moss added 16 points and 2 steals.

Khimki moved into a four-way tie for second place with a combination of their win over Fenerbahce, Maccabi’s win over Olympiacos, and Besiktas’ upset over Siena. Khimki is the low team of the four tied. Fenerbahce drops to 2-10 on the Top 16 round as their Euroleague struggles continue.

Khimki broke the game open in the second quarter, starting with a 9:0 run to open the frame. The hosts kept the pressure on and continued building their lead over the second 10. By the end of the half they were up 12, 49:37.

The guests got back in the game with a scoring run that brought them within one, 59:58. Khimki’s Petteri Koponen dropped in a triple, then follow-up with a jumper, and shortly later got, and connected on, four free throws after a foul, and an unsportsmanlike foul. As time ran out on the third, Egor Vyaltsev closed out scoring for the hosts to give them a nine-point lead heading into the last quarter, 70:61.

In the fourth frame, Khimki kept pressing and gained another 14 points on their margin to close out the game up 23, 99:76.

Olympiacos Piraeus – Maccabi Electra, 67:73
Maccabi Electra won their fifth Euroleague Top 16 game in a row when they defeated the defending Euroleague champion Olympiacos, 67:73. The guests never trailed in the contest and the win improves their record to 7-5 and in a four-way tie, which includes Olympiacos, for the No. 2 spot in Group F.

Electra took control early getting up 8:15 and then closing out the first frame, 13:21. In the second, an early 1:10 run opened the margin, but the visitors weren’t finished and they continued building the lead until they were up 18 at the half, 23:41.

The Reds fought back in the third, chipping away at the deficit and then attacking it full on at the end of the frame to pull within seven 49:56. The hosts were able to pull to within three on the tail end of a 14:2 run that began late in the third, but Maccabi never let Olympiacos take over the lead and held on for a 67:73 win.