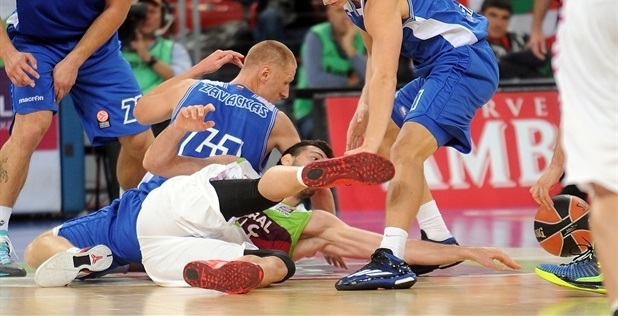 The 2014/2015 Euroleague season tipped off in style with six games across three groups on Thursday night, with the remaining six games taking place on Friday evening. During the start of Round 1, four of the host teams picked up victories to get their Euroleague campaigns off to a good start, while two road successes were also recorded.

Anadolu Efes Istanbul vs. Unics Kazan, 82-76
Efes Istanbul welcomed Unics Kazan to Turkey and gunned down the Russians to get their 2014/2015 Euroleague season off to a good start.

Efes took the early initiative in the game and controlled the early exchanges to pace to an 8-0 lead, but eventually Unics Kazan registered and cut the deficit to one point after 10 minutes, the scoreboard reading 20-19. The hosts continued in top gear at the start of the second frame while Kazan once again had a lapse. The Turkish team used a 10-0 run midway through the second to build a 45-34 lead at halftime. Unics Kazan picked up scoring in the third quarter, but Efes seemed in control of the hardwood and extended their lead by a point through Q3 (64-52). The visitors rallied in the final stanza and the Russians won the period, but could not catch the home team down the stretch.

Keith Langford was the game’s best scorer with 19 points for Unics, while James White had the only double-double with 13 points and 10 rebounds.

A tight first quarter saw the teams go bucket for bucket, but towards the end of the opening stanza the hosts started to carve out a lead. After 10 minutes on the deck Tel Aviv lead 21-19 and continued to slowly open a gap through the course of the second stint. The Israeli team opened a 12 point lead (40-28) and maintained a solid cushion to take command of the game at halftime, the score at 44-37. Tel Aviv opened a double digit lead (11 points) at the start of the third, but Limoges had their best spell and reeled 11 points unanswered to tie the game (48-48). However, the champs had another gear and reopened a substantial 69-55 lead after 30 minutes. The hosts romped through the final quarter to ease to the win.

Jeremy Pargo scored 20 points and offered 9 assists for Tel Aviv, with Marquez Haynes scoring 15 and Devin Smith doubling up with 13 points and 12 boards.

Adrien Moerman notched 17 points and 12 rebounds for the losing effort.

The hosts held their own through the open clashes, pacing with Malaga through the first quarter and taking an encouraging 20-18 lead into the second period. The Spanish visitors started to put successful attacking plays together in the second frame, ending the first half with a 0-14 run to lead 36-47 at the long break. It took two minutes for scoring to recommence in the third quarter, but when it did Malaga extended further to 36-51. Zagreb improved slightly, but the away team stood firm to lead 48-61 at the last split. Unicaja Malaga was in total control of the game and got the job done through the final frame.

Ryan Toolson set the tone for Malaga with a game high 20 points, followed by Fran Vazquez with 13 points and 8 rebounds.

The Spanish team started the game well, opening a 12-7 lead through the first quarter before continuing to look good at 20-15 after 10 minutes of play. In the second quarter the hosts continued to damage Neptunas Klaipeda at the perimeter and by halftime the visitors had slipped 7 points behind, with the scoreboard reading 37-30. The third quarter proved to be decisive as Laboral Kutxa Vitoria extended their lead to double digits and held it until the 30 minute buzzer, leading 61-50 heading into the fourth. In the last stanza there was no way back for the Lithuanian team as Vitoria eased to the victory.

Donatas Zavackas scored 17 points and took 7 balls off the glass for Klaipeda.

Despite the raucous crowd, the Turkish visitors were unfazed as they opened a 4-9 lead through the early minutes. However, the Serbian hosts responded to lead 17-8, but Galatasaray ended the quarter with a 0-12 to hold 17-20 after ten minutes. With the crowd behind them, Crvena Zvezda stormed through the second quarter, lighting it up at both ends to take a commanding 46-30 lead at the long break. The game closed down in the third quarter as the hosts protected their lead and Galatasaray found it tough to break through. After 5 minutes of the stanza it was 4-4 partially, but Belgrade paced to a 63-48 lead at the last interval. The crowd had plenty to go wild for as the home team picked up a deserved victory through the fourth quarter.

Boban Marjanovic was the go to guy for the Serbian powerhouse as he notched 22 points while pulling 10 off the boards.

Valencia vs. Olympiacos, 68-71
Olympiacos put its recent woes behind it as the Greek team travelled to Valencia Basket and came away with an important road victory.

The game was tight in the first 10 minutes as the teams went basket for basket, but Euroleague giant Olympiacos opened an 18-20 lead at the end of Q1. That two point advantage was held through the course of the second quarter as the Greek contingent took a 36-38 into the locker room at halftime. The teams could hardly be separated through the third quarter as they went blow for blow, but once again the visitors held on to their two point cushion, leading 54-56 with 10 minutes to play. Nothing changed through the fourth quarter as it remained anybody’s game until the last seconds, but Olympiacos held on for the win.

Vassilia Spanoulis was the talisman for the Greek team once more, sending 21 points through the nets.