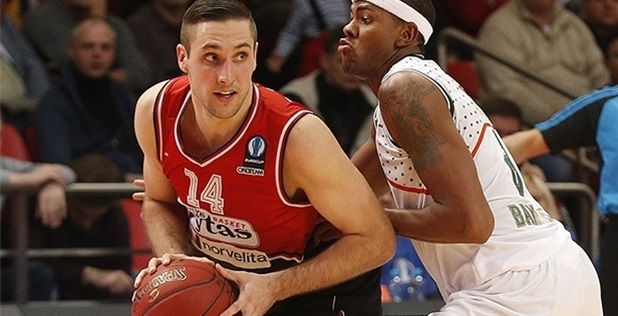 Four games opened week four of the 2014/2015 Eurocup season. Each game ended in favour of the home team as Zaragoza got back on track, EWE Baskets Oldenburg opened its account, while Union Olimpija Ljubljana and Lietuvos Rytas Vilnius consolidated their dominant positions.

CAI Zaragoza vs. Grissin Bon Reggio Emilia, 93-79
Spanish club Zaragoza got its Eurocup season back on track after two consecutive losses by nailing Italian team Reggio Emilia at home. The visitors now sit at the bottom of Group A with a 1-3 record, while Zaragoza moves to 2-2.

The first quarter would prove to be the difference as Emilia forgot to start the game properly and instead thought they were still in the locker room. Or at least that’s how it looked as Zaragoza demolished the visitors in Q1 with a massive 30-6 run, an annihilation that the Italians would spend all game trying to put right. They started in the second period by finally waking up and finding a rhythm, taking the quarter 18-23 to make it 48-29 at halftime.

The hosts had a huge cushion, but needed it in the third stanza as Emilia continued to control the hardwood, stealing the frame 16-22 to cut into the huge lead further. Through thirty minutes the Italians had done well but still trailed by 13 points, with the scoreboard reading 64-51. A big fourth quarter followed where the teams went basket for basket, with Zaragoza easing out the away team with a 29-28 winning stint.

Rasko Katic propelled the Spaniards with 18 points and 9 boards. Stevan Jelovac hit 17 points and took 7 off the glass, followed by Jason Robinson and Chris Goulding with 15 points each.

The German club paced to an early 10-3 lead, set by the scoring of Adam Chubb, while nailed eight points at the start of the game. The hosts held their lead as Spirou cut into the deficit through the middle of the quarter, but as the opening buzzer sounded the Belgians had snatched the initiative, ending frame 1 with a 20-23 lead. The teams traded scores through the start of the second quarter, with the lead changing hands on five occasions. Oldenburg opened a slender advantage, but Charleroi once again fought back and by the time the teams headed into the locker room the scoreboard was locked at 41-41.

EWE Baskets had the momentum and carried into the second half, outpacing the visitors comfortably through the third period with a 20-13 run. The stanza changed the game and through three quarters the home team had a cushion with the score at 61-54. Charleroi never gave up and won the fourth quarter to make the German crowd sweat, but at the end of regulation Oldenburg had held on to win the game.

Chubb finished the game as the top scorer for the winners with 20 points, while he also took 8 rebounds and supplied 5 assists. Rickey Paulding added 13 points for the home team.

Dylan Page led the game with 26 points and 9 caroms, while Eric Wise added 19 points for the downed Belgian visitors.

Union Olimpija started the game hot and within the first three minutes had opened an 11-5 lead and the onslaught continued to a 17-7 advantage. Baskets rained from downtown as the hosts pushed to a commanding 25-11 lead at the first split in play. The Russian away team had been shocked in the first quarter but recovered admirably at the start of the second. Zenit put together a 2-9 run to cut the deficit to 28-25, but Olimpija went again and found rhythm at the attacking bucket once more. By time the long break had arrived the Slovenian home team had opening a confidence boosting 51-36 lead.

Things got better for the Ljubljana faithful at the start of the third stanza as their team opened an 18 point gap on the scoreboard, making it 58-40. St. Petersburg was under consistent pressure but managed to hit enough baskets to keep them in the game, just about. The visitors tied a high scoring frame 25-25 to keep the deficit the same at the final break, the score sitting on 76-61. Union Olimpija looked comfortable, but the Russians exploded in the final frame to put together a 13-23 run. It made the game interesting down the stretch, but the hosts held on to snatch the win and top the group.

Sasu Salin led the hosts as they looked classy during the first three quarter, scoring 21 points and claiming 10 boards in a double-double performance. Mirza Begic scored 17 points in victory, while Blaz Mahkovic managed 10 on the night.

The teams traded buckets early in the first quarter to tie proceedings at 4-4, but the Lithuanian hosts soon put some space on the scoreboard, taking an 18-10 lead. Vilnius maintained its advantage through the remainder of the first quarter to lead 23-18 after 10 minutes. Banvit opened the second quarter with a triple, but the home team scored four without reply to open an 8 point lead at 29-21. The visitors started to find more consistency at the basket as the second frame wore on to make it a 3 point game (40-37), but once again Lietuvos Rytas kicked on and extended to a comfortable 49-39 advantage at halftime.

Traded hits from downtown opened the second half in style and the Lithuanians hit another two baskets from the beyond the arc to lead by 16 points early in Q3, 60-44. Banvit responded but midway through the quarter the hosts lead in double digits, the score 62-52. The visitors conceded more points and through thirty minutes trailed by 12, the board reading 66-54. A big scoring fourth quarter saw the Turkish team throw caution to the wind, matching Vilnius to 26 points apiece, not enough to win the game.

Gediminas Orelik took a career high 27 points as he shot 5 from 7 triples for the winners. Adas Juskevicius added 14 points, while Billy Baron scored 13 and Mindaugas Lukauskis scored all of his 11 points in the closing quarter as the home team fought off a lively Banvit Bandirma attack.