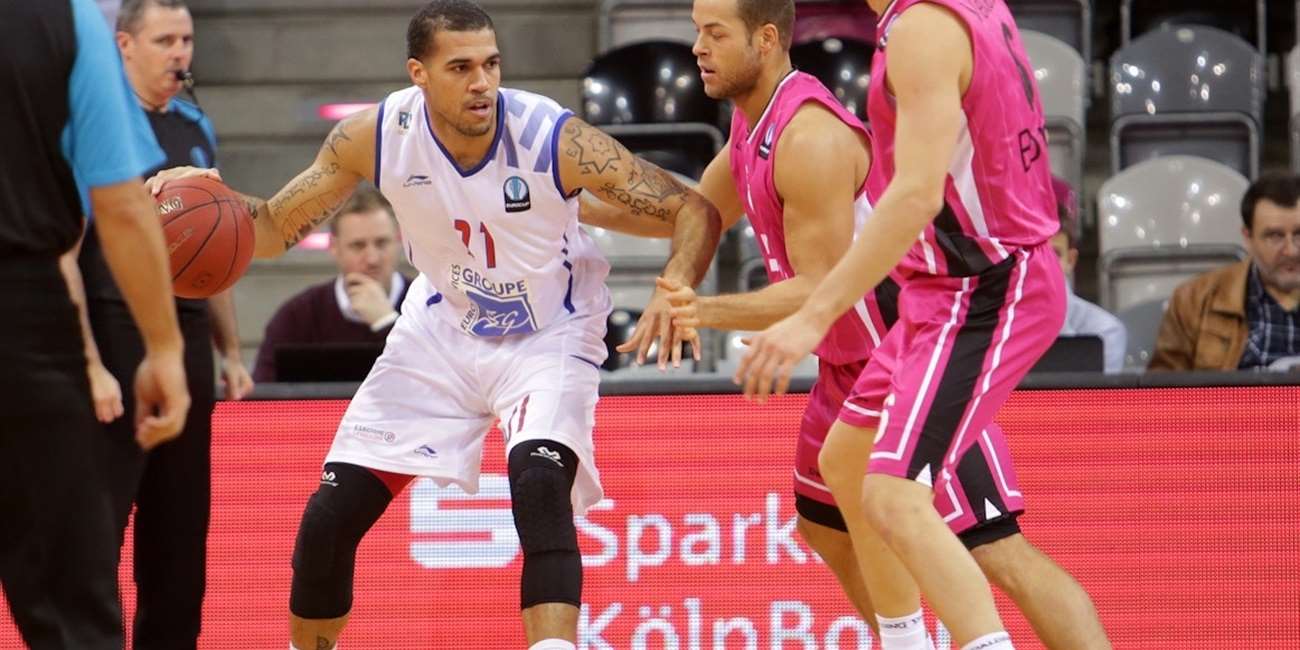 Plenty of things got settled during the penultimate round of action in the Eurocup Last 32 this week, but heading into the final round in seven days, there is still plenty of nail baiting hoops left. On Wednesday, the three teams that already qualified for the next round cemented their positions at the top of their respective groups. Joining those teams in the next stage are a number of other clubs, with a further six punching their tickets to the Eurocup Eighthfinals.

Group G
Strasbourg swept Unics Kazan after a 60-82 road win over the Russian club away from home. The French outfit joined Unics on 3-2, but takes command of first place thanks to that superior head to head record. Both teams took another step to qualification, but Group G remains tight after CEZ Nymburk kept its chances alive with a 63-84 road win over Zenit St. Petersburg to lock 2-3 with the Russian club. Nymburk has been resilient in recent weeks and heading into the final round next week any team from Group G can qualify.

Group H
Despite a wobble a few weeks back, Herbalife Gran Canaria has rebounded well and is finishing Group H with a flurry. The Spanish club defeated Dinamo Banco di Sardegna Sassari 90-74 at home to sew up first place in Group H with a 4-1 record (an impressive 14-1 overall in the Eurocup this season). Sassari (2-3) has a chance of qualifying if the Italian club can beat Banvit Bandirma at home in week 6. As for Banvit, the Turkish club moved to 3-2 in second place by eliminating Buducnost VOLI Podgorica with an 87-74 home success.

Group I
Krasny Oktyabr Volgograd and Virtus Roma clashed in a big game in Russia, with both teams knowing they could progress with victory. As it was, Roma silenced the crowd and Eurocup top scorer Randy Culpepper by defeating Krasny 86-88 after an overtime period. The other game in Group I also went to overtime, with Cedevita Zagreb punching its Eighthfinal ticket and ending CAI Zaragoza’s run. The victory meant that Virtus Roma could also progress to the next round, while Cedevita moved to first place with a 4-1 record.

Group J
Khimki Moscow Region looked slick as the club eased past FoxTown Cantu to progress to the next stage of the competition. A 75-62 victory ensured that the Russian club qualified, although the club still has a battle to get first place (and of course home court advantage in the next round) when it meets Limoges next week. It was a big night for the French club as Limoges downed PAOK Thessaloniki 68-79 away from home. The winners can look to clinching first place next week, although Limoges will also have to look over their own shoulder as a loss next week and a Cantu win would lead to elimination.

Group K
Bayern Munich had already qualified for the next round and consolidated first place in Group K with a 74-84 road success over JDA Dijon in France. Compatriot Brose Baskets Bamberg also booked its arrival in the next round by securing second place in the standings with a 91-90 win over Union Olimpija Ljubljana at home. However, it went to the wire, with the hosts winning the game by a single point in overtime. An Elias Harris layup for Bamberg was enough to secure qualification with 2 seconds of the added frame remaining.

Group L
A high octane encounter saw PGE Turow take out Lietuvos Rytas Vilnius 104-93 at home to make sure of both a place in the next round and first place in Group L. Lietuvos Rytas on the other hand heads to a nail biting Round 6 where all three remaining teams in the group can progress to the Eighthfinals. The other two teams on a 2-3 record are Telenet Ostend and Sevilla, with Sevilla keeping its hopes alive with a 72-84 road win over the Belgian club on Wednesday. Next week the Spanish club will meet PGE Turow, while Ostend will head to Vilnius to play Lietuvos Rytas.

Group M
Pinar Karsiyaka Izmir had already qualified heading into this week, but still the club faced a huge game. Welcoming compatriot Besiktas Istanbul, Karsiyaka Izmir clinched top spot in Group M with a hard fought 73-64 win. Despite the loss, Besiktas fights on with a 2-3 record, locked with Paris-Levallois after the French club defeated Neptunas Klaipeda 88-79, eliminating the Lithuanians in the process. Besiktas will now welcome Paris to Turkey next week in a winner takes all clash.

Group N
Lokomotiv Kuban Krasnodar stayed perfect in Group N and indeed the season. A 92-79 win over CSU Asesoft Ploiesti in Russia secured first place, meant that Lokomotiv is still unblemished in the Eurocup this season (15-0), and broke a record with 16 consecutive wins stretching back to 2013 when the club won the competition. Current champions Valencia also booked its spot in the next round by outgunning SLUC Nancy in France, with the visitors edging to a 73-75 victory to make sure of second place at 3-1.