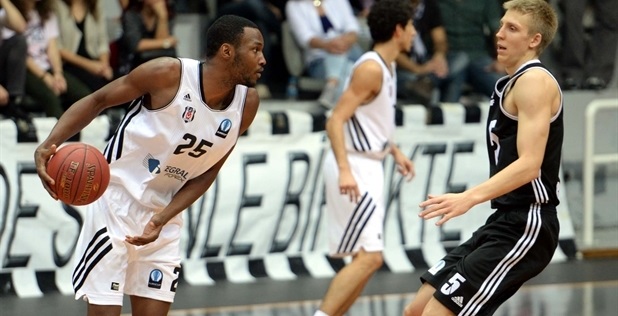 The Eurocup Round 4 came to an end on Wednesday with more exhilarating Basketball around the continent, including two games that went right to the wire through over time. The competitions’ remaining undefeated teams all extended their untouched records through week four.

Group A
Telekom Baskets Bonn defeated Paris Levallois 81-78 at home, but needed a comeback in the second half to get the job done. The French visitors looked in control through the first half, winning the first quarter 22-15 and extending with a 14-21 second quarter. At the midway split Paris led by 14 points at 29-43. Bonn emerged in better condition in the third quarter and edged a high scoring frame 26-24 to set up an all or nothing fourth stanza. In the final act the Germans threw everything at Paris and a 26-11 run ensured the comeback.

In the second German-French encounter of the Eurocup Round 4 Strasbourg edged Brose Baskets Bamberg 77-74 at home. A 20-17 winning quarter for the hosts was reversed in the second quarter as Bamberg stole a small one point lead at halftime (37-38). Strasbourg had the better of the third quarter thanks to a 20-16 run, but the visitors made it interesting down the straight although Strasbourg held on to tie the fourth and win the game.

Group B
Telenet Oostende needed overtime to see off ASVEL Lyon in Belgium, finally emerging with a 99-97 win in the Eurocup Round 4. Lyon looked hot through the opening 10 minutes, taking a comfortable 16-25 lead, but Oostende hit back with a 23-16 second quarter (39-41). The teams could not be separated through the second half and at the end of regulation were locked at 85-85. In the added period the hosts had one more gear to move into and won the game narrowly.

In France, Dijon downed Foxtown Cantu 74-66 to continue its good start to the season. A close first quarter saw Dijon steal a two point advantage at 16-14, but Cantu responded with an 11-13 Q2 to tie proceedings at 27 apiece through halftime. The hosts took a big step to victory with a big 26-12 run in the third quarter and held on through a 21-27 surge from the Italians in the last frame.

Gran Canaria stayed perfect with a 74-63 victory over Artland Dragons Quakenbrueck in the Eurocup Round 4. Things looked shaky early on for the hosts as they trailed to the Dragons 16-25 after 10 minutes on the hardwood. A 17-15 winning second quarter only went a little way to putting the score right, the board reading 33-40 at the long break. The Spanish team cut the seven point deficit through the third quarter to tie the game at 50-50 after 30 minutes. Gran Canaria eased through the fourth quarter to put some gloss on the end score.

Group C
A mini classic played on in the Czech Republic as CEZ Nymburk needed three overtime periods to defeat Virtus Roma 89-87 at home. An up and down game saw both teams trade the lead and through 40 minutes they could not be separated at 56-56. In the first overtime frame they once again tied at 13 apiece, and it was a similar scenario in OT2 as the stint locked at 6-6. Finally in the third additional span Nymburk stole it at the death.

Nancy had too much for Sevilla at home as the French club downed the Spanish visitors 68-59. The hosts paced themselves off a big first quarter, taking the frame 24-9. Sevilla won both the second and third stanzas (11-15, 10-15), but still trailed 45-39 through thirty minutes, allowing Nancy the space to ease through the fourth quarter to victory.

Group D
Khimky Moscow Region cruised past Szolonoki Olaj with a 98-84 home success. The hosts led at the end of every quarter, winning the first 30-22 and then holding a 49-43 lead at the long break. In the third quarter Moscow extended with a 25-13 run and then merely used experience to see out the game in the ultimate act.

It was a big win for Besiktas as they took out VEF Riga 88-71 at home. The hosts looked in control throughout, winning Q1 23-20 and building on the lead with a 23-15 run in the second frame. After 20 minutes the scoreboard read 46-35 and the Turkish team held off a mini Riga rally in the third stint to cruise through the last 10 minutes to the win.

Group E
CSU Asesoft Ploiesti continued its impressive form by taking out Hapoel Jerusalem 83-74 at home. The Israeli visitors were riding high after destroying Maccabi Tel Aviv on the weekend, but they could not live with the Romanian champs early on. Ploiesti raced to a 43-37 halftime lead thanks to a 19-18 first act and a 24-19 second. Jerusalem hit back to win the third quarter 16-20 before the Romanians saw out the game with a 24-17 winning frame to end the game.

Partizan Belgrade’s season shows little sign of improvement as the team crashed to a 61-59 defeat on the road at Krasny Oktyabr Volgograd. The Serbian powerhouse is now sitting last in Group E with 0-4 record and struggled to find traction here, losing the first quarter 15-12 and slipping to a 32-25 halftime score. They visitors replied well in the second half, but Volgograd held on in the fourth to take the spoils.

Group F
Ventspils were shot down by PAOK Thessaloniki 63-66 at home. The Greek visitors took an early lead and after 10 minutes on the floor led 12-19. The hosts restored party with an 18-11 run in the second quarter putting the score counter on 30 each. Thessaloniki stole the third quarter by a single point (14-15) before snatching Q4 19-21 to claim a narrow victory.

Lokomotiv Kuban Krasnodar has been in formidable form this season and it continued in the Eurocup Round 4 with a 63-77 win over Buducnost VOLI Podgorica. The Russian club is still unblemished at the top of Group F and looks good this campaign. The visitors recovered from a 20-17 losing first quarter to win the next three frames (14-19, 10-20, and 19-21) to win the game in style.