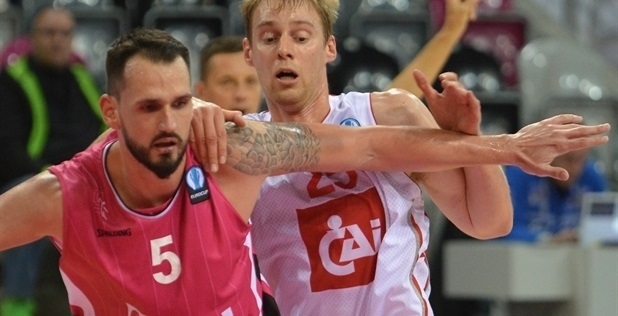 Eurocup, a look back on Round 3

With Round 3 of the Eurocup Regular Season wrapped the group phase of the competition is starting to take shape. Five teams remain undefeated through the competition, but there are still plenty of Regular Season weeks for struggling teams to improve their fortunes and make a push for the next stage of the tournament.

Group A
Telekom Basket Bonn edged out visitors CAI Zaragoza 90-88 at home to inflict a second consecutive defeat on the Spanish club. Dirk Madrich led the winners with 20 points, but it was a team effort with six Bonn players registering double figures. The German hosts built their first 2014/2015 Eurocup win off a strong 26-18 opening quarter. Zaragoza hit back in the second and third to tie the contest at 65 apiece through 30 minutes. Bonn used home momentum to edge a high scoring final stanza 25-23.

Brose Baskets Bamberg dished out a home beating on visiting French club Paris-Levallois, romping to an 81-55 success in Group A. During the opening 10 minutes the German team looked in control defensively and carved a convincing 19-10 lead at the first split. The hosts extended their advantage through a 26-17 run in the second, opening a 45-27 lead at halftime. A massive 20-9 streak in the third frame killed the contest and despite a losing final act, Bamberg eased to a big victory down the stretch.

Group B
German club Artland Dragons Quakenbrueck slipped 67-75 at home to Telenet Ostend. The Belgian club recorded its first Eurocup win of the campaign as they used winning first and third quarters to claim the victory. J.P. Prince led the winning effort with 18 points and 6 rebounds, helping Ostend to an 11-19 first quarter lead, before they lost narrowly in the second and wrapped it up in the third stanza, holding on through the fourth period.

ASVEL Lyon moved to a winning 2-1 record by gunning down Foxtown Cantu 78-70 in France, sending the Italians to the bottom of Group B with a 0-3 record. A narrow opening saw the teams trade buckets, but Cantu came away from the quarter with a slender 14-15 lead. The visitors extended through the second quarter, but the game remained tight at the long break (30-33). There was not much movement on the scoreboard during the third, but Lyon made it 48-49 and were down one point after 30 minutes. A big final stint by ASVEL saw them control the hardwood in the dying minutes and win the game.

French club JDA Dijon narrowly lost 69-71 to Herbalife Gran Canaria Las Palmas, despite home court advantage. Gran Canaria won the game in the middle quarters, responding to a 15-12 loss in the first quarter the Spanish club went big with a 22-12 second and a 23-25 third to lead 50-59 at the final split. Dijon tried a reply with home support in strong voice, but the hosts fell short.

Group C
SLUC Nancy entertained EWE Baskets Oldenburg and managed to see off their German rivals 72-67 at home in Group C. Oldenburg had the better of the opening exchanges and through 10 minutes held a 13-17 advantage, but Nancy reversed the deficit through a 21-16 second period to lead by a single point at the midway buzzer (34-33). The third quarter proved the difference as the French hosts outscored the visitors 19-12 and managed to hold on against a losing fourth frame, seeing off the Oldenburg threat to win the game.

Italian powerhouse Virtus ACEA Roma edged out Sevilla 84-82 at home to remain unbeaten in this season’s competition. The Spanish visitors stormed into the lead by winning the first quarter 15-24, but Roma cut into the deficit and after a mammoth 28-15 blitz in the third held a 64-56 lead with 10 minutes left on the ticker. Sevilla hit back to win the last quarter by six points, but still slipped to its first defeat of the competition. Brandon Triche led the Italian club with a game high 25 points.

Spirou Charleroi took its first win of the Eurocup season by defeating fellow strugglers CEZ Nymburk 82-73 at home. Eric Wise was the catalyst for the Belgian victory as he hit 17 points and took 10 off the glass for a double-double. The hosts led in the first frame, taking a 21-14 lead at the first break, before Nymburk fought back to 39-36 at halftime. A big third stanza saw Spirou stream in 29 points to lead 69-53 after 30 minutes. The home team eased off in the fourth, but easily won the game down the back end.

Union Olimpija Ljubljana got its season back on track by travelling to Hungary and downing Szolnoki Olaj 80-86 for an important away win. A big scoring frame opened the game and got the fans cooking early on with the hosts pacing to a 28-25 lead. Olaj continued to control the floor with a 20-17 run in the second stint, enough for a 48-42 lead at the long break. Things looked very good for the Hungarians through thirty minutes after a 22-16 third stanza made it 70-58. Union Olimpija threw everything at the hosts in Q4 and the plays came off, the visitors blasted Olaj 10-28 to steal an unlikely comeback.

A first win of the competition came the way of Zenit St. Petersburg as the Russians downed VEF Riga 84-70 in a comfortable home success. The hosts paced to an early lead and held it through the first period to lead 23-17 at buzzer one. In the second Zenit extended by going hot and nailing 28 points, the scoreboard reading 51-37 at halftime. A defensive master class in the third quarter bolstered St. Petersburg’s possession of the lead, 70-47 with 10 minutes remaining. In the fourth Riga rallied, but only for pride as they had been soundly beaten.

Turkish hosts Besiktas narrowly edged out Khimki Moscow Region 66-64 at home. The game was tight throughout and after 10 minutes the score sat on 21-22 in favour of Khimki, while in the second period the visitors extended to lead 39-43 at the midway point. A 14-15 run in the third helped Moscow Region to a five point cushion as the buckets dried up, the score 53-58. Besiktas went tough in defence during Q4, stopping Khimki at 6 points and sinking 13 of their own to steal the success.

Group E
Krasny Oktyabr Volgograd could not stop Lithuanian visitors Lietuvos Rytas Vilnius with a 63-77 victory that propelled the club to a 2-1 winning record. Marcus Cousins doubled up with 21 points and 10 boards for Volgograd, but he could not prevent the defeat. The visitors responded to an 18-18 tie in the first period by winning the second 11-14 to edge a low scoring first half 29-32. The home team continued to struggle or baskets, but Lietuvos Rytas found a rhythm and won the third frame 14-22 and the fourth 20-23 to make it a comfortable second half.

Romanian giant CSU Asesoft Ploiesti failed to make it three wins from three as the team fell on the road to Banvit Bandirma. The Turkish hosts needed a game winning 14-0 run in the fourth to complete the 81-66, putting the visitors away. Ploiesti led 9-13 after the opening quarter, but Banvit looked slick with a 24-18 second quarter and a consolidating 22-19 run in the third. After thirty minutes the hosts led 55-50, but the Romanians threatened in the fourth before the Turks put the game to bed with that big run.

Hapoel Jerusalem defeated Partizan NIS Belgrade 82-79 at home to pick up its first win, while Partizan’s patchy form continues and they now prop up Group E. Belgrade has been improving after a woeful start to the season and the team had the early momentum, winning the first and second quarters to lead 42-46 at the halftime buzzer. A 14-20 run in the third gave the visitors a double digit lead (56-66) through 30 minutes, but it was not be as Partizan collapsed and yielded a 26-13 final act to hand Jerusalem the victory.

Group F
Pinar Karsiyaka Izmir outgunned hosts Ventspils to leave Latvia with a 72-81 win in the Eurocup third round. Kenny Gabriel, Bobby Dixon, and Juan Palacios all scored 18 points for the winning effort, while Palacios recorded a double-double with 10 points and Gabriel took 8 boards. The game was never in doubt as the visitors won the first three quarters with ease (23-18, 24-16, 22-16) to lead 50-69 at the final split. Ventspils restored some pride with a 22-12 fourth quarter, but the damage had been done and Izmir took the game.

Polish club Stelmet Zielona Gora is now 0-3 and has yet to win a game after losing 76-90 at home to Buducnost VOLI Podgorica. As for the visitors, they collected their first win of the season and will be buoyed by a solid road performance. Podgorica edged a hard fought first frame 16-17 before going hot in the second with an 18-30 run (34-47). Gora made it interesting through thirty minutes by cutting the double digit deficit, but Buducnost went again in the fourth and wrapped up the game.