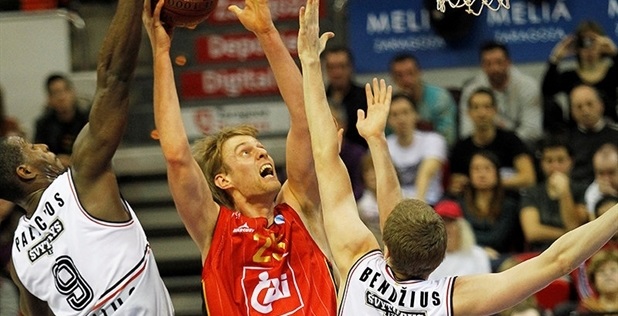 We are halfway through this season´s Eurocup Last 32 as Round 3 was completed on Wednesday night. Many of the groups are now taking shape as the competition moves closer towards the eighth-final knockout phase.

There were only three road wins throughout the schedule, while there were a lot of big margins recorded.

FoxTown Cantu smashed Pinar Karsiyaka 84-55 at home on the back of a blistering 21-2 run in the second quarter as the team was spurred on by the 15 points from Stefano Gentile. It was the first Last 32 win for the Spanish club, putting the team 1-2 for third place in Group I, while Turkish club Pinar stays rooted to the floor at 0-3.

Strong individual performances pushed Aykon TED Ankara Kolejliler to a comfortable 81-68 home win over Brose Baskets Bamberg. Vanja Plisnic tallied a double-double performance of 23 points and 11 rebounds while Vladimir Golubovic put his own double-double game together with 16 points and 13 rebounds. Ankara replaced Brose at the top of the group, each with a 2-1 record.

BCM Gravelines Dunkerque traveled to Italy and took out Dinamo Banco di Sardegna Sassari 79-85 to move to a 1-2 record in Group J. Despite leading after three quarters in front of their home fans, the Sassari players slipped to a loss in the final 10 minutes and the club now sits bottom of the group at 1-2.

Nothing could separate Khimki Moscow Region and CEZ Nymburk after regulation as the teams tied at 72-72 so the game went to overtime. The Czech hosts and held a double figure lead in the third and an 8 point advantage in the fourth, but in overtime Khimki snatched the 80-86 win with Marko Popovic scoring 8 points (24 overall) in the extra period. Khimki improves to 3-0 and remains undefeated after 12 consecutive Eurocup games.

Montepaschi Siena´s woes continue as the Italian champions fell on the road to Maccabi Haifa Bazan (86-66). Donta Smith put in a perfect game for the Israeli team and did not miss a shot (9-of-9 two-pointers, 1-of-1 three-pointers, 3-of-3 free throws) as he helped himself to 24 points, 6 rebounds, and 6 assists. Haifa´s win pushed them to 2-1 in second place.

Nizhny Novgorod´s unblemished record ended as the Russian club lost on the road to last year´s Spanish finalists Bilbao Basket, 80-54. The hosts led throughout the contest and put together a 20-4 run in the first half to lead 43-22 at the midway point.

Crvena Zvezda Telekom Belgrade defeated Panionios Athens 84-64 to leave the Greek team without a win at the bottom of Group L (0-3). Belgrade´s undefeated home record has helped the team to 2-1 and second place in the group and the players claimed victory behind a 16-0 third quarter run.

Hapoel Migdal Jerusalem dug deep in the fourth to beat Budivelnik Kiev 88-84 and stay undefeated at the top of Group M. Yotam Halperin had 9 points, 3 assists and 2 steals as he had a fantastic game of 19 points, a career-high 10 assists and 3 steals for the winning team. Josh Duncan put together a 20 point game from the bench to help aid Jerusalem as the team snatched the victory.

It proved to be a tough home encounter for Union Olimpija Ljubljana as the team fought off Banvit Bandirma 84-80. Olimpija now improves to 2-1 in Group M but still stays behind Turkish club Banvit at the bottom of the table.

Both Alba Berlin and Khimik Yuzhne were undefeated before this Eurocup clash, but the German team emerged with the win at home 87-71. ALBA powers on to 3-0 at the top of the group thanks to a 15 point apiece contribution from Reggie Redding and Leon Radosevic. Khimik Yuzhne will live to fight another day despite dropping to 2-1 in second place.

French club Strasbourg piled the pressure on Radnicki Kragujevac by claiming a narrow 80-76 home win that keeps the Croatian visitors bottom of the Group with a 0-3 record. It was Strasbourg´s first Eurocup Last 32 win and the club now moves to 1-2 in third place.

Telenet Ostend beat Unics Kazan 78-75 in Group O to hand the Russian club it first defeat in the Eurocup Last 32 phase. The 13 game undefeated run from Kazan was the longest winning streak in Eurocup history, but the club saw it crumble in Belgium thanks to a Dusan Djordjevic (15 points) inspired Ostend.

Besiktas Integral Forex stays undefeated in Group P, but the Turkish club was run close by Croatian home team Cedevita Zagreb (69-71). The game went down to the dying seconds and was only won when Muratcan Guler hit from downtown to take the spoils. Zagreb still had chances to snatch a last second win but missed three attempts at the basket to hand Besiktas the win.