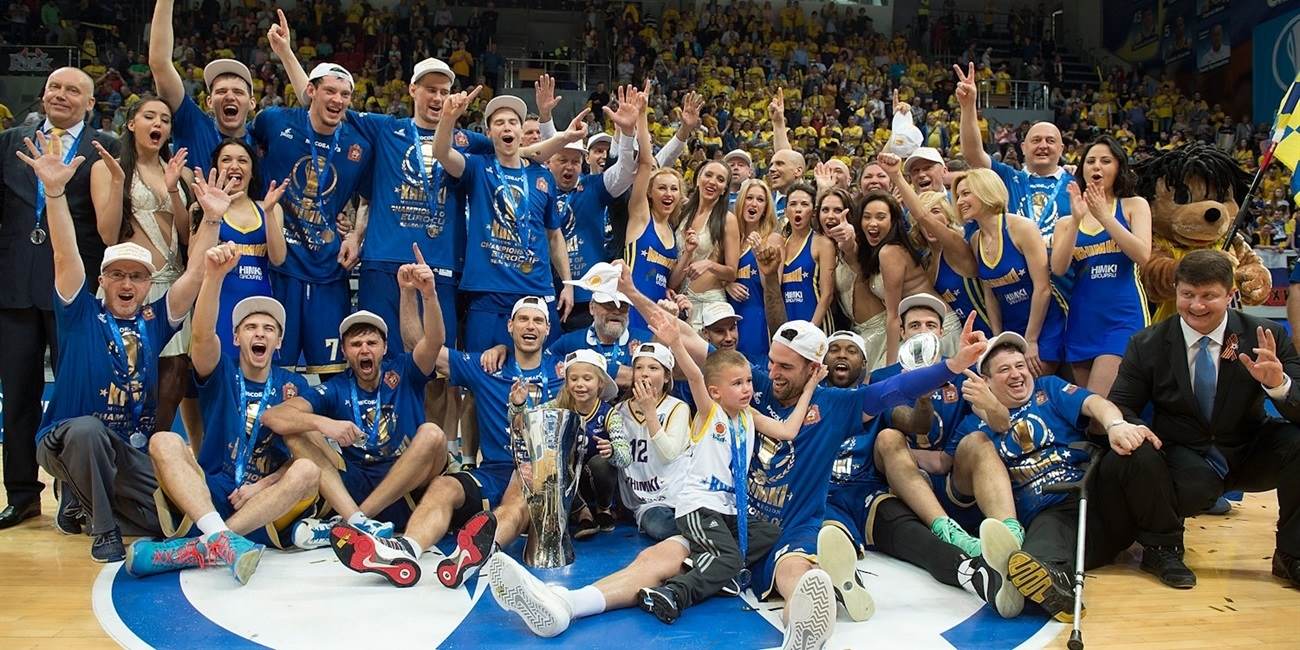 The 2015 Eurocup champion has been crowned, and the honour goes to Russian club Khimki Moscow Region after a final series sweep against Herbalife Gran Canaria Las Palmas.

Khimki had stormed game 1 in Spain last week and controlled game 2 in its home arena to secure the victory and the Eurocup crown. It was Khimki’s second Eurocup success since the format started in 2002, the first title landed in 2011. The Russian club looked formidable in the finals series, just as it has in the VTB League this season, and continental success will spur the club on to complete its domestic duties.

Khimki Moscow Region vs. Herbalife Gran Canaria Las Palmas, 83-64
After dominating Game 1 last week in Spain to lead 66-91 (check out the game report), Khimki headed into the game as the red hot favourite to win the Eurocup. The Russians had the momentum and Gran Canaria a mountain to climb, and it turned out that scaling the mountain was a step too far for the Spanish club. Khimki dominated Game 2 and strolled to the title; it was a relentless display, especially in attack where the hosts swamped Gran Canaria and dished 23 assists compared to just 12 from the Spaniards.

Khimki showed it meant to kill the game early with a blazing first quarter that saw the club drain 27 points and hold Gran Canaria at 18. The second quarter saw the blistering pace continued by the hosts with an 18-12 run that made it a fifteen point game through halftime (45-30). Of course, a fifteen point lead here meant a 136-96 lead on aggregate, leaving Gran Canaria needing to win the second half by more than 40 points. It was game over, and in the second half the hosts put the icing on the cake with a 23-16 winning third quarter before riding a slight 16-18 loss in the fourth act.

James Augustine nailed a game high 18 points in the win, while Tyrese Rice offered 16 points in a performance that ensured him the finals MVP. Paul Davis also added 16 points and doubled up with 10 rebounds, followed by Petteri Kopenen with 13 points, 5 boards, and 5 scoring passes.

Walter Tavres topped a stunned Gran Canaria with 17 points and made it a double-double with 10 rebounds, while Brad Newley helped with 12 points.

Khimki head coach, Rimas Kurtinaitis was full of praise for his charges:

“I want to thank my players for the big effort they put out in both games. Game 1 was a perfect one for us. Game 2 was a little bit easier due to the 25-point lead we had from the game in Gran Canaria. It was not as complicated as Game 1, but it was not easy to motivate my players to play Game 2. It was a great result and defence really made the difference in this series. We allowed Gran Canaria to score 66 points in Game 1 and 64 tonight. The final result does not show what a great team Gran Canaria is. They paid a high price in this series for their lack of experience. I believe that with an experienced coach like Aito Garcia Reneses, they won’t have much problems to go back to the Spanish League playoffs. They are a much better team than what they showed in these two games.”

A clearly disappointed Aito Garcia Reneses was pragmatic in defeat:

“First, I want to congratulate Khimki. They deserved to win; they played an incredible final. It’s sad to lose a final, but this is not a time to be sad. This is a time to evaluate the season. We reached the Eurocup Finals and to be the Eurocup runner-up is something very, very important. This is not the time to look at the mistakes we made during the game, but a moment to improve and for Herbalife Gran Canaria to be in the finals is a great success. Khimki has a very quick team; it is very difficult to defend them. They are a very strong team. And they have great shooters and were making three-pointers even when we played great defence. That makes a big difference. “