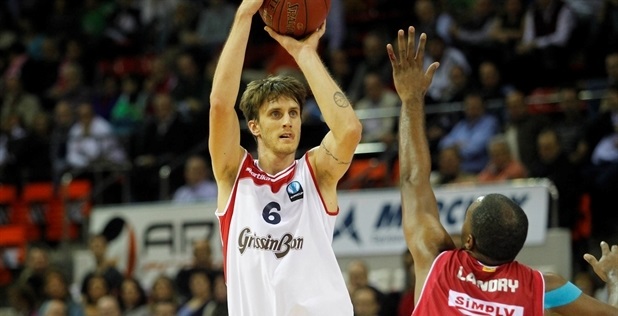 There were three games in the Eurocup tonight as Round 7 of the 2014/2015 competition started. Over the three games teams who have been struggling in the competition finally got some momentum by recording wins and giving themselves a slither of hope for Last 32 qualification.

Grissin Bon Reggio Emilia vs. Paris-Levallois, 78-72
Italian club Reggio Emilia collected just its second victory of this season’s Eurocup season by ousting Paris-Levallois at home. The hosts have now put themselves in contention for a berth in the Last 32 despite still sitting last in Group A. Emilia now holds a 2-5 record, but can reach Paris in fourth place with a 3-4 record.

The game started tight, with both teams registering early baskets, but the French team soon opened a solid 7-14 lead during the first act. Reggio Emilia responded late through the period to reduce the gap and make the score 14-16 through the first break. The teams continued to be close through the start of the second period and midway through shared the score at 32 apiece. The hosts started to put together more plays and eventually won Q2 26-19 to make it 40-35 at halftime. In the third quarter the visitors opened the stanza with a 3-12 run to retake the lead before Emilia again tied proceedings at 47-47. Paris seemed to have the momentum and through the final minutes of the third opened a slender 51-53 lead. In the fourth quarter the contest continued with toing and froing Basketball where the score was locked eight times through the period. Reggio Emilia finally emerged with the win to breathe new life into its Eurocup campaign.

Sharrod Ford put on a master class for Paris with a huge double-double of 21 points and 18 rebounds. Blake Schilb followed with 14 points and Mike Green with 12 points, 5 boards, and 7 assists.

Artland Dragons Quakenbrueck vs. Foxtown Cantu, 66-68
The two bottom clubs in Group B entered this clash both looking to put their second win in the Eurocup on the board. Italian away team Cantu managed to do just that with a slender win over the Artland Dragons. The German hosts now have it all to do from 1-6 in the Group, while things suddenly look better for a Foxtown outfit sitting on a 2-5 record.

The Dragons set the early marker in front of their own fans as they looked the stronger unit through the first quarter. As the 10 minute buzzer sounded the home team had opened a good 23-15 advantage. Foxtown Cantu grew into the game during the second frame and managed to reign in the Artland attack, eventually taking the period 10-21 to snatch a 33-36 lead at the long break. In the third stanza of the contest both teams settled into a scoring pattern and the buckets dried, with the low scoring quarter ending 14-13 in favour of the Germans. Cantu still held a 47-49 lead through 30 minutes and managed to retain that two point cushion at the end of the game as the teams locked 19-19 through the fourth quarter.

Only two players reached double figures on the scoring charts for Foxtown Cantu, Damian Hollis with 16 points and Marco Lagana with 13 points.

For the defeated Dragons, Antonio Graves led the way with 15 points, while Brandon Thomas, Anthony King, and David McCray all grabbed 11 apiece.

Stelmet Zielona Gora vs. PAOK Thessaloniki, 84-77
Stelmet ZG entered this contest as the only team in this season’s Eurocup without a win, but the Polish club kept its slim qualification hopes alive with a victory over Greek club PAOK at home. The victory puts Gora on 1-6 in Group D, while PAOK Thessaloniki is still in the mix with a 4-3 winning record.

The hosts were clearly in the mood to make their winless streak right from tip off as they set about the Greek contingent in the first quarter to lead 20-16 at the first split. In the second frame PAOK stopped the Stelmet ZG attack at 16 points and managed to nail 18 of their own point to reduce the gape to two points at halftime (36-34). The home team found its scoring touch again in the third quarter to pour in 23 points, while the visitors only managed 19. The Polish team took its 59-53 lead into the final act and held off a strong Thessaloniki surge to win the last ten minutes 25-24 in an exciting finale.