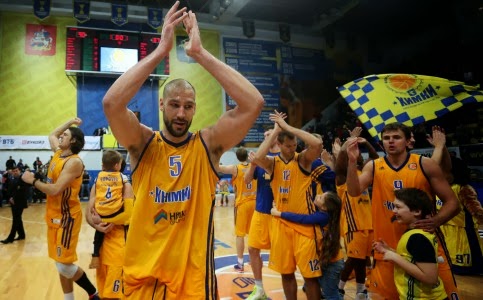 The Eurocup Eighthfinals are underway as Round 1 of the first knockout stage of the competition was completed on Wednesday evening. There were six clashes in cities around Europe following the two games from Tuesday, and the round produced typically dramatic Basketball.

EIGHTHFINALS A
In a game that was held in Lithuania due to the troubles in Ukraine, Budivelnik Kiev overcame French team JSF Nanterre 86-82. The “hosts” held the lead for much of the contest and were paced by an outstanding effort from Darjus Lavrinovic, who grabbed 28 points alongside 9 boards and 3 blocks.
Full Game Report

EIGHTHFINALS B
The game between Khimik Yuzhne and Turkish club Aykon TED Ankara was also played in a neutral venue due to the tensions in Ukraine. The chosen court was a little closer to home for TED Ankara as the game was played in the Abdi Ipekci Arena, Istanbul. Despite playing on home soil TED slipped to a 75-71 defeat. Khimik stormed back from a 10 point second quarter gap to lead going into the fourth. Ankara came back from 7 down to tie the game during the last stanza but ultimately the Ukrainian team held on for the win.

EIGHTHFINALS C
Eurocup regulars will know that Wednesday´s clash between Valencia Basket and Khimki Moscow Region was a repeat of the 2012 final. On that occasion Khimki emerged victorious, but in Round 1 of the Eurocup Eighthfinals this season Valencia grabbed a comfortable 75-59 home win. The Spanish team built success on the back of 16 points from Oliver Lafayette, while four other players hit double figures. The hosts took a 28-12 first quarter lead and never looked back as the win snapped the record 15 game Eurocup winning streak that Khimki was enjoying.

EIGHTHFINALS D
Besiktas Integral Forex cruised to an 88-71 success over Nizhny Novgorod in Game 1 of their series on Tuesday. The Turkish team can point to Chris Lofton as the catalyst for success as the American hit six from downtown on his way to 28 points. The visitors led at the midway stage (40-47) but the Turkish hosts responded with a blockbuster second half in which the team sunk 48 points on the way to victory. Semen Antonov picked up a double-double of 19 points and 10 rebounds in defeat.

EIGHTHFINALS E
It was a late show from Ratiopharm Ulm that saw the German team snatch an 89-87 win over Israeli outfit Hapoel Migdal Jerusalem. The hosts came back from 15 points down in the fourth quarter to steal an unlikely win after Migdal had led for three quarters. Indeed, the deficit was at 7 points with less than three minutes to play, but Ulm sparked into action and the visitors collapsed during a tense closing.

EIGHTHFINALS F
ALBA Berlin has been laying down its credentials for the title during the Top 32, but the German team was faced with a solid Banco di Sardegna Sassari in the first game of the Eurocup Eighthfinals. ALBA sent a message by leaving Italy with a convincing 83-91 win. The visiting team opened a 40-47 lead at halftime and never looked back, securing vital points in the third to put the game beyond the Italian hosts. Leon Radosevic stood out for Berlin with 24 points.

EIGHTHFINALS G
Unics Kazan put one foot in the next round by soundly beating CEZ Nymburk 58-91 on the road. The Russian club saw Andrew Goudelock tie a club record by scoring 36 points during a stunning personal performance. Nymburk now trails by 33 points heading into next week´s decisive showdown and will need a special performance on the road to progress.

EIGHTHFINALS H
Crvena Zvezda Telekom Belgrade gunned down Lietuvos Rytas Vilnius 88-82 at home to take early advantage in the series. The first half of the game proved tight, but the hosts found another gear in the second half and twice held double digit leads. A 12-0 streak in the third period gave the Serbian the platform to build on for victory.