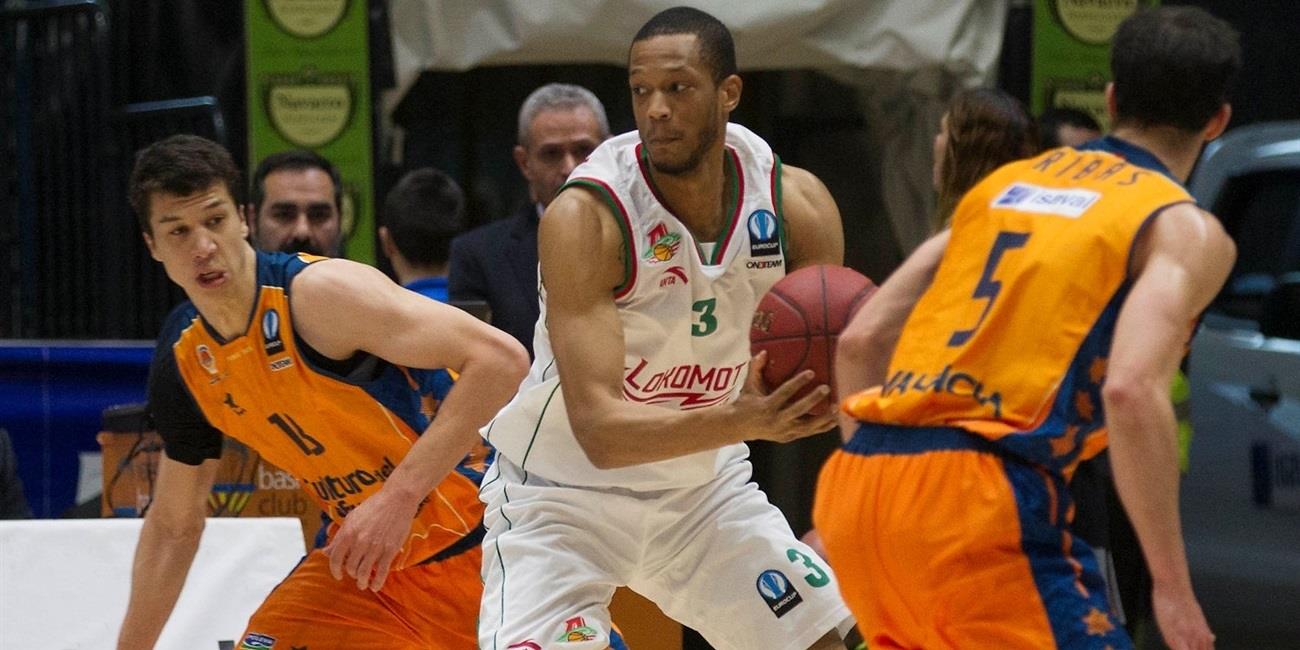 The Last 32 of the Eurocup came to an end this week as groups G through N were wrapped up, with some clubs heading to the Eighthfinals and the rest heading out of the competition. With the round coming to an end there was little surprise to see plenty of nail biting Basketball action around the continent. With that in mind, let’s take a look through the games and see who stayed in the Eurocup and who dropped out.

Group G
Group G was concluded on Tuesday when Zenit St. Petersburg and Unics Kazan both picked up road wins to reach the Eighthfinals. Zenit travelled to France and bested Strasbourg 61-73, a result that brought the teams level with 3-3 records. However, the visitors progressed thanks to a 2-0 record over Strasbourg in head to head games. Keith Langford and D’or Fischer were the catalysts for Unics Kazan’s CEZ Nymburk away from home. Langford logged 24 points and Fischer 17 points as the Russian club consolidated its place at the summit of Group G.

Group H
Banvit Bandirma defeated Dinamo Banco di Sardegna Sassari 72-89 away from home in a game that decided second place in Group H. The Turkish visitors downed their Italian hosts with a strong first half, with the Bandirma outfit carrying a 34-50 lead into halftime and led by nine or more for the rest of the game. Herbalife Gran Canaria had already progressed to the next phase of the Eurocup, but the Spanish club bot the gloss on its Last 32 showing with an 83-88 road win over the already eliminated Buducnost VOLI Podgorica.

Group I
Virtus Roma carried its formidable home form into the next round by remaining 100% in the Italian capital after an 87-66 win over CAI Zaragoza. The Italians had already qualified, but victory here ensured first place in the standings, while Zaragoza was eliminated some time ago and ended its run with a 1-5 record. Joining Roma in the next round is Cedevita Zagreb, that was sorted out last week, but the Croatian team ended its Group I campaign on a high with a 92-101 road success over Krasny Oktyabr Volgograd.

Group J
Khimki Moscow Region has been in control of Group J, but the club still entered Round 6 needing to secure first place. The Russian outfit did just that with a 72-86 away win over Limoges, a defeat that sent the French club crashing out and sent Khimki into the next phase with 5-1 record. FoxTown Cantu put an end to Limoges’ competition by defeating eliminated PAOK Thessaloniki 78-70 at home. The Italian club needed a 3 point victory and in a tense finale managed to carve enough of a gap to ensure qualification.

Group K
Bayern Munich is putting together the kind of run that suggests the club will fight for the title this season. The Bavarian giant downed German BBL title rival Brose Baskets Bamberg 87-63 in a show of strength. Bayern is now undefeated through the Last 32 phase (6-0) after dropping down from the Euroleague at the end of the Regular Season. Brose Baskets Bamberg had already secured second place, making the clash between JDA Dijon and Union Olimpija Ljubljana a dead rubber. As it was, French club Dijon ended its Eurocup on a high with a 73-76 road win.

Group L
Telenet Oostende and Lietuvos Rytas Vilnius clashed in a make or break game where the winner would progress in second place in Group L. Lithuanian powerhouse Lietuvos Rytas delivered in front of its fans with a huge 111-83 victory that eliminated the Belgian visitors. PGE Turow Zgorzelec was already sure of a berth in the next round and of first place in the standings, but the Polish champs did not ease off as they downed Seville 76-97 to record its fifth straight win in the competition.

Group M
A very edgy game between Paris-Levallois and Besiktas Istanbul decided which of the clubs would claim second place in Group M and punch a ticket to the next round. The French team overcame a hostile Istanbul crowd to progress with a 71-77 win that sent Besiktas packing for another season. Pride was at stake as Pinar Karsiyaka Izmir (already qualified in first place) visited Lithuania to play already out Neptunas Klaipeda. The Turkish visitors clinched its sixth successive win with an 83-90 score line that kept them unblemished through this stage.

Group N
Both Lokomotiv Kuban Krasnodar and reigning champs Valencia Basket has already reached the Eighthfinals, while their respective positions were also decided. However, this was still a big game between two Eurocup championship contenders, and Lokomotiv won it 89-90 in a stunning finale. The Russians stayed unbeaten through the stage (6-0) and the competition (16-0), while Valencia progress on 3-3.