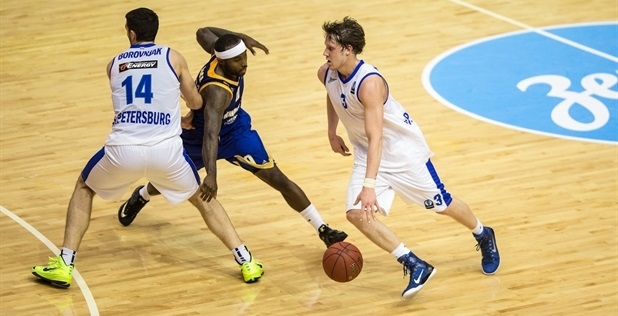 Eurocup, close games aplenty in Round 5

Round 5 of the Eurocup regular season saw perhaps the closest hoops of the 2014/2015 campaign so far, with a number of games going right to the wire. The groups are now taking shape and the fight for the Last 32 is officially heating up, with all tables having runaway leaders and a chasing pack of teams fighting it out for qualification.

Brose Baskets Bamberg vs. CAI Zaragoza, 90-74
Bamberg got back to winning ways with a comfortable home win over CAI Zaragoza in Germany. Josh Duncan led the hosts with 21 points, one of four players from the German team to hit double figures. Brose Baskets stormed through the first half to hold possession of a big halftime lead, the board reading 45-32. A tied 17-17 third frame and another winning period in the fourth ensured a win that put the club second in the standings with a 3-2 record. Spanish club Zaragoza now sits with a 2-3 losing record.

Grissin Bon Reggio Emilia vs. Telekom Baskets Bonn, 84-85
Telekom Baskets Bonn overcame Reggio Emilia by a single bucket on the road to stay in the qualification hunt, while the Italian hosts now sit bottom of Group A with a 1-4 record. The home team started well, using a big scoring first quarter to lead 32-20 after 10 minutes before extending to a 50-36 halftime advantage. Bonn won the third quarter, but after 30 minutes Reggio Emilia still led by 12 points (68-56) and even had a 74-67 advantage with just four minutes of the game left. Bonn exploded in the dying embers of regulation with a 10-18 run, snatching the game in dramatic fashion to cue wild celebration.

Artland Dragons vs. JDA Dijon, 76-79
Dijon kept the pressure on Gran Canaria at the top of the group with a narrow road win over Artland Dragons in Germany. The French club took the initiative early on and leapt to a 14-17 lead after the first quarter, while a 16-18 winning second gave the visitors a solid 30-35 lead at the long break. The third quarter brought consolidation for Dijon as they won the frame 14-16 to lead 44-51 at the final split. The Dragons rallied through the last act with a 21-14 flurry, making the game interesting down the stretch. Erving Walker topped the winners with 21 points, while Anthony King paced the losing effort with 18 points and 7 rebounds.

FoxTown Cantu vs. Telenet Ostend, 68-60
Cantu finally registered its first win of the Eurocup season with a hard fought home success over Telenet Ostend in Italy. The teams traded baskets through the first quarter and locked the scoreboard at 14 apiece at the end of Q1. In the second stanza the hosts found some space at the perimeter and offered a 20-17 run to lead 34-31 at the midway point. The Italians built on their lead by winning the third term 19-15 and then held their nerve by extending through the fourth frame to win the game.

Proximus Spirou Charleroi vs. SLUC Nancy, 73-88
Proximus Spirou Charleroi fell to another defeat (their fourth of the campaign) by losing 73-88 at home against SLUC Nancy, with the French club moving to a 4-1 record and a share of top spot in Group C. The Belgians came through a touch and go first frame to lead 18-19, but by halftime Nancy had taken control courtesy of a 19-26 surge, handing the team a 38-44 advantage at the middle split. Spirou hit back in the third stint with a 21-17 run, making it anyone’s game after half hour at 59-61. The visitors regrouped in the fourth quarter with a game defining 14-27 run, putting some gloss on the final score.

Sevilla vs. CEZ Nymburk, 65-66
One point separated these team at the end of the game as Czech powerhouse Nymburk won its third game (3-2) to leapfrog Sevilla in Group D. The Spanish club had the better of a low scoring first quarter, emerging with a 13-10 lead through 10 minutes. Nymburk sent 24 points through the net in the second quarter to take command with a 32-34 halftime lead. An 11-15 run through minutes twenty to thirty gave the visitors an extra edge and a six point cushion with Q4 to come (43-49). Sevilla fought back in the final frame, but the hosts missed a buzzer shot that would have snatched the win.

Virtus ACEA Roma vs. EWE Baskets Oldenburg, 83-81
Virtus Roma kept control of the top spot in Group C with a tight home win over EWE Baskets. Rok Stipcevic led the scoring with 23 points to set the tone for the hosts as they picked up their fourth win of the Eurocup season. The Italians looked in good touch as they paced to a 25-21 lead through a high scoring first act. Oldenburg struck back in the second period to cut the deficit to a single point heading to the locker room (43-42). The German visitors went hot in the third stint to take control of the game, using an 11-24 streak to lead 54-66. Roma responded with a fourth quarter blitz, streaming in 29 points while holding EWE Baskets to just 15, enough for a narrow win.

Zenit St. Petersburg vs. Khimky Moscow Region, 89-86
Zenit took a home victory in this all-action Russian derby game as Khimky made the journey north for the clash of the country’s two biggest cities. The hosts got off on the right path, winning the opening exchange 15-12 to hold a lead at buzzer one. The scoring picked up in the second quarter and Khimky managed to win the period 24-26 to make it 39-38 during the long break. The tight action continued in the third quarter as Zenit took the frame 23-22 to hold a slender two point lead after 30 minutes (62-60). More hot play at the buckets followed in the fourth as the home team held its lead and extended by one point to win the game. Walter Hodge nailed 25 points and claimed 9 assists for the winners, while Dejan Borovnjak claimed a double-double of 21 points and 11 boards in success.

Partizan NIS Belgrade vs. CSU Asesoft Ploiesti, 76-69
Serbian giant Partizan NIS Belgrade opened its Eurocup account at fifth time of asking by beating CSU Asesoft Ploiesti at home, putting an end to the Romanians good run. The game opened with both teams attacking consistently and the scoreboard reflected it as Partizan led 25-23 at the first split. The hosts built on their advantage by taking the second period 18-15, enough for a 43-38 lead at the halftime buzzer. The Romanian contingent rallied in the third stanza by doubling Partizan’s score, making it 54-58 in their favour through three quarters. The home team responded with the kind of confidence that has been lacking this season, winning the fourth with a 22-11 run to win the game.

Hapoel Jerusalem vs. Lietuvos Rytas Vilnius, 70-81
Lietuvos Rytas continued its good form with a cruising away win over Hapoel Jerusalem in Israel. The visitors took early charge of the hardwood with a 14-21 run through the first quarter and then extended with a 16-22 run in the second. Heading into the locker room the Lithuanian team looked good at 30-43. Jerusalem struggled to get into the game and could only watch as Lietuvos Rytas went again in Q3 to open a 44-62 lead at the final interval. The inevitable fight back occurred as Hapoel took the fourth 26-19, but it was too little too late.

Banvit Bandirma vs. Krasny Oktyabr Volgograd, 90-75
Banvit got back to winning ways after last week’s loss and defeated Krasny Oktyabr with ease to stick with Lietuvos Rytas at the top of the group with a 4-1 record. The Turkish team was slow to get into the game as the Volgograd outfit won the first quarter 18-20. Banvit responded to edge the second quarter 22-21, but through 20 minutes the Russians led 40-41, but all was to play for. The hosts found a rhythm in the third frame and won the period with a big 25-14 charge to take control of the scoreboard (65-55). The home team poured in thirty points during the final act to win the game at a canter. Vladimir Veremeenko led Banvit with 22 points and 8 rebounds, while Randy Culpepper matched that scoring output to pace Krasny.

PAOK Thessaloniki vs. Buducnost VOLI Podgorica, 80-60
PAOK thumped Buducnost in Greece to collect another home win and move to a 4-1 record in second place in Group F. The hosts rarely looked trouble as they controlled the pace of the game and looked at ease on their home hardwood. PAOK stormed to a 20-13 lead after 10 minutes and then extended with a 22-12 run in the second quarter to lead 42-25 at halftime. Scoring 21 points in the third frame helped the Thessaloniki cause, but holding the Podgorica visitors to just 9 made the difference, allowing the home team to ease through the fourth despite losing the stanza.

Lokomotiv Kuban Krasnodar vs. Pinar Karsiyaka Izmir, 75-63
Lokomotiv stayed as one of only two teams undefeated in the competition so far by gunning down Pinar Karsiyaka Izmir at home. The Russians have looked the most formidable club in the Eurocup this season and will be looking to go deep into the tournament. They lost the first frame here though, yielding the first quarter 20-21 to Izmir. However, a typical Lokomotiv response came in Q2 as the team hustled to hold the visitors to just 4 points! The result was a halftime lead of 39-25. From there the hosts never looked back, riding a 16-20 losing third quarter to ease down the straight to win their fifth consecutive game.

Stelmet Zielona Gora vs. Ventspils, 69-79
Both of these teams entered this contest out of form in the Eurocup, but Ventspils recorded a road win to stop a three game losing streak. As for Polish team Stelmet, they are now the last team left in the competition without a win to their name.