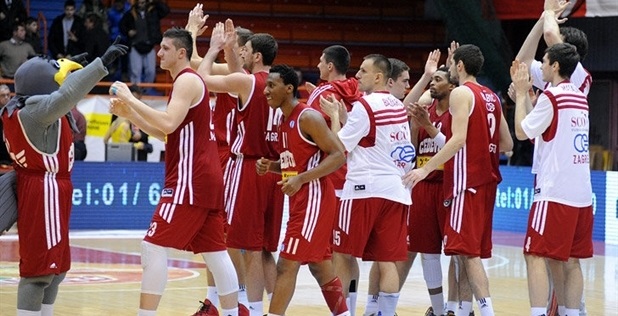 The Eurocup Regular Season is drawing to close this week as Round 10 is completed and attention turns to the Last 32. There were just five games around the continent on Tuesday (the remaining games on Wednesday), but with so much to sort out in the groups there were two more teams booking their places in the next round of the competition.

Cedevita Zagreb defeated Elan Chalon (main image) in Group B to secure a position in the Last 32 of the Eurcup, while the already eliminated Belgacom Spirou pulled off a shock result against group leaders Dinamo B. Sardegna. Although Paris-Levallois has already been eliminated from Group C, the team claimed victory over the already qualified Union Olimpija Ljubjana.

Valencia took a comfortable home win over ASVEL to become the second team on the night to grab a place in the next round of the Eurocup. In Group D Lukoil Academic Sofia ended its Eurocup season in a winning fashion by defeating CSU in a clash between two eliminated teams.

Cedevita Zagreb vs. Elan Chalon sur Saone, 75-71
Cedevita welcomed French club Chalon to Zagreb on Tuesday for the final Regular Season game of the campaign and the team gave the home fans plenty to cheer by booking a place in the Last 32. A close fought victory puts Cedevita into second place with a 6-4 record and the club could stay there if Bilbao beats EWE tomorrow, with a reverse result pushing the Croatian team to third. Chalon was eliminated last week and now holds a 4-6 record in fifth place in Group B.

A close first quarter produced little room for either team to open a substantial lead, but spurred on by the home fans Cedevita took the period 20-17. Cedevita continued to ascend at the start of the second quarter and took the score to 30-21 and later in the period held 35 to 27. However, the French visitors played themselves into the game and actually took control by the midway buzzer, with score at 35-36. Chalon opened up a six point lead early in the second half, but the home team responded to cut the lead, only for Chalon to once again press ahead to hold a 52-59 advantage after 30 minutes. With qualification for the Last 32 of the Eurocup at stake for Cedevtia a fourth quarter push was needed, and the team delivered. A tense fourth period saw the home team snatch the lead thanks to a 16-2 run and hold on for a vital victory at the end of the Regular Season.

Nolan Smith put in a fantastic all round display for Cedevita by claiming 18 points, 8 rebounds and 4 assists. Goran Suton had 12 points plus 7 rebounds, and Jusuf Nurkic helped with 11 points plus 6 rebounds for the winners.

A.J. Slaughter was instrumental for Chalon with 19 points and 9 assists, while Steed Tchicamboud netted 16 and Clint Capela collected 14 points plus 10 rebounds in the losing effort.

Valencia Basket vs. ASVEL Villeurbanne, 97-70
Valencia qualified for the Last 32 with a cruising victory over ASVEL Lyon and in the process put on a show for the home fans in the last Eurocup game for the club before the New Year. The Spanish team put 27 points on the French visitors to secure third place in Group C with a 6-4 record, while Lyon slips to fifth and is eliminated with a 4-6 record.

Valencia led the game from start to finish in an emphatic bid for qualification to the Last 32, and even in the first 10 minutes it was evident the Spanish team was in control. Indeed, throughout the first period the hosts restricted Lyon to just 8 points as the scoreboard read 31-8 after the first period. The visitors started to put baskets on the board in the second quarter but Valencia kept up a good rhythm in attack to hold a commanding 51-29 lead heading into the changing rooms at halftime. The third quarter headed down the same path as Valencia continued to dominate and used minutes 20 to 30 to carve out a 75-44 advantage heading into the last period. With the game secure Valencia put on a show in front of the home fans and opened up a 35 point lead (88-53) during the fourth quarter, before Lyon slightly cut the deficit by the final buzzer.

With nearly 100 points on the board, Valencia had six players score in double figures. Justin Doellman was out in front with 16 points, Bojan Dubljevic and Rafa Martinez each netted 14. Sam Van Rossom had 11 points plus 7 assists in the winning effort, and Pau Ribas and Serhiy Lishchuk also scored 11 apiece.

A disappointing night for ASVEL was only eased slightly by Amara Sy with 12 points, Edwin Jackson with 11, and Marko Keselj scored 10 in defeat.