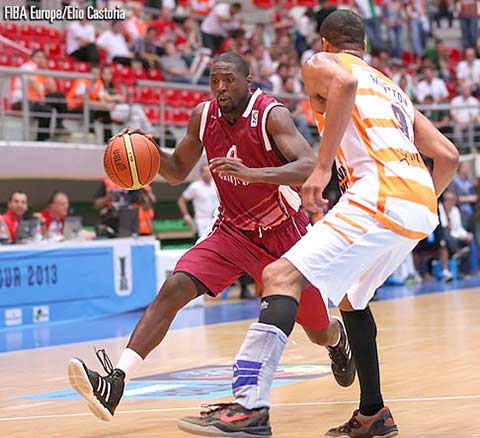 The 2012-13 EuroChallenge Finals are set as Krasnye Krylia Samara stopped a comeback by Gravelines Dunkerque early in the fourth quarter to earn their spot in the Finals and keep their impressive undefeated EuroChallenge season intact, while the Final Four host club, Pinar Karsiyaka held off EWE Baskets in front of 5,000 enthusiastic fans and will play for the EuroChallenge title on Sunday night.

Krasnye Krylia Samara – BCM Gravelines Dunkerque, 81:78
Krasnye entered the contest having won every EuroChallenge game they’ve played this season (14) and got out quick building an 11-point lead in the opening frame, only to have Gravelines outscore them in all three of the remaining quarters. The French club pulled even at 62 with just under eight minutes to play, but Samara ran off seven straight and countered every advance through the rest of the period to earn their trip to the finals and extend their winning streak to 15 games.

Krasnye used a 9:2 run mid-way through the first frame to get out in front of BCM 20:10 with just over two minutes to play in the frame. Omar Thomas knocked down 16 of his game-high 28 points in the first 10. Samara led 23:12 at the end of the first frame.

It appears that Nikita Balashov of Krasnye is performing a levitation trick with a basketball, while BCMs Dwight Buycks performs an interpretive dance move behind him, but it’s actually Balashov stealing the ball from Buycks with 1:44 to play and Buycks trying to draw a whistle with some acting.

Gravelines had no intention of just letting the Russian club run away with the contest and came out on a 2:7 run to cut the margin to six within the first two minutes of the second stanza opening. Lamayn Wilson countered for Krasnye, connecting on 2 of 3 singles after getting fouled on a triple attempt, and then knocked down a three-ball to push the lead back to 10, 30:20. With just under three minutes to play Yannick Bokolo found the bottom of the net with a jumper to get BCM back to within seven, but Andre Smith countered with a driving lay-up, and the next trip down the court Aaron Miles was fouled as he drove the lane, made the basket and the following free throw for the three-point play. The sequence gave Krasnye a 12-point advantage with just under two minutes remaining in the half. Dwight Buycks split a pair of singles for Gravelines and Kennedy Winston dropped in a layup and a jumper off a Dmitry Kulagin turnover in the backcourt to close out the scoring in the half with Samara up seven, 41:34.

In the third Gravelines had cut the gap to five with four minutes to play in the frame, but Wilson connected on a triple to give Krasnye an eight-point margin again. Buycks hit a jumper, Abdoulaye Mbaye hit a three-ball, and Ludovic Vaty knocked down a pair of singles, adding up to a seven-point run and a deficit of a single point, 53:52, with three minutes left in the third. Wilson capped off the run with another triple for Krasnye to extend the Russian club’s lead back to four, which is where the margin stood as time ran out on the frame, 62:58.

Juan Edwards opened the scoring in the fourth with a jumper and then on the following possession was fouled, twice, with the second one being a shooting foul where he dropped in two charity tosses to knot the score at 62 with seven and a half minutes to play. Samara’s Chester Simmons countered with a triple, then a pair of lay-ups off steals, to run off seven of his own and get Krasnye back to leading by seven, 69:62. Buycks and Winston both hit a pair of singles to get BCM back to within three, Thomas completed a three-point play to push to six then Cyril Akpomedah and Buycks hit back-to-back triples around a Nikita Balashov lay-up for Krasnye, that got Gravelines within two, 74:72 with a minute and a half to play. Thomas hit a jumper and Buycks had his pocket picked by Balashov, who dished the ball off to DeJuan Collins for a triple to practically ice the game at seven with 36 seconds to play. Winston hit a three-ball with 23 left, Collins was fouled and connected on his free throws to get the lead back to five with 21 seconds to play. It took BCM eight seconds to get their first triple attempt off, which was blocked by Simmons, then Edwards missed the follow-up three-ball, but Julius Johnson connected on the third attempt with only three seconds to play, to close out scoring at 81:78.

Thomas led all scorers with 28, Simmons added 16 points and 4 big steals, and Wilson dropped in 15. Buycks was high-man for Gravelines with 21, Winston dropped in 18, Vaty added 14, and Mbaye contributed 10.

Pinar Karsiyaka – EWE Baskets Oldenburg, 66:62
Pinar Karsiyaka advanced to the title game with a hard-fought 66:62 win over EWE Baskets on their home court. The contest was a tight a game as could be played with neither team building any more than a five-point advantage and the lead changing continuously (15 lead changes and 11 ties) throughout the 40 minutes. The clubs finished with virtually the same stat line up and down the list, with the exception of one, Pinar connected on 19 of 24 (79.2%) from the free throw line, while EWE only hit 10 of 15 (66.7%). From the floor (both inside and outside the arc) Pinar was 21 of 53 (39.6%), while EWE connected on 23 of 56 (41.1%).

Pinar’s Robert Dixon heads towards the hoop against EWE Baskets.

The first quarter was played to a dead-heat with the clubs finishing the first 10 knotted at 17. It also included the biggest lead of the night when Pinar got up 11-6 mid-way through the opening stanza. William Thomas connected for eight points in the frame for the hosts, while Adam Chubb picked up nine of his game-high 19 for EWE.

Oldenburg took the lead early in the second, but Pinar grabbed it back for the duration mid-way through, building their second five-point advantage after a Robert Dixon lay-up and a follow-up jumper by Bora Pacun. Julius Jenkins split a pair of free throws and then Dominik Bahiense de Mello threw down a dunk to close off the half with Pinar up 30:28.

The guests stormed out of the dressing room to the tune of seven unanswered points and a five-point lead behind jumpers from Chubb, Christopher Kramer (a triple), and Ronald Burrell. Dixon brought Pinar back with six of his own, a pair of singles and two lay-ups. Dru Joyce dropped in a three-ball for EWE and Pacun tied things back up at 37 mid-way though the frame. Kramer put Oldenburg back on top with a pair of singles with 22 seconds to play in the quarter, then Umit Sonkol got a put-back aver a missed jumper by Thomas with three ticks left on the clock to give the home club the advantage back, 47:46.

The final frame opened with Sonkol slicing the cords with a triple to put Pinar up four, 50:46. Joyce countered with a triple, which was followed by a Rickey Paulding jumper to put EWE on top with just over seven to play. Can Mutaf dropped in a jumper for Pinar and then Jon Dielbler hit a pair of singles to put the hosts up five, 56:51, at the five minute mark. From there, EWE could do no better than get within two. Inside a minute left, Chubb got a put-back of a Kramer missed lay-up to bring EWE to 64:62. Dixon hit a pair of free throws with 25 seconds left to give Pinar a four-point lead at 66:62. One of the key plays of the game for Pinar came seconds later (with 14 seconds left) when Melvin Sanders blocked an attempted dunk by Chubb and shutting the door on a comeback.

Dixon led Pinar with 18 points, 4 rebounds and 6 assists. Diebler added 11 points, and Thomas dropped in 10 points while grabbed 6 rebounds on the night.

EWE was led by Chubb’s game-high 19 points and 8 rebounds and Paulding added 17.