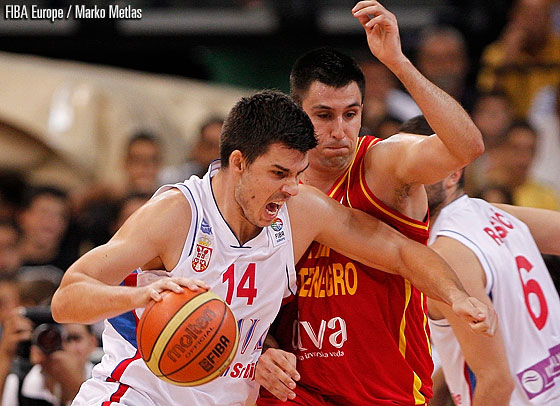 As the EuroBasket 2013 Qualifications games continue today around Europe, the teams are mindful of the fact that the top two teams in each of the six divisions will qualify to play in Slovenia next September and the top four teams that place 3rd in their respective divisions will also qualify. There are already eight teams that have qualified based on their Olympic participation or their performance in the Olympic qualifiers (F.Y.R. of Macedonia, France, Great Britain, Greece, Lithuania, Russia and Spain), as well as the hosts, Slovenia. To those eight will be 16 more teams, four of which could punch their tickets with victories today.

Montenegro leads Group A with a perfect 6-0 record and plays Serbia in the last game on the schedule today. The last time these two met, on Aug. 8th, it took a last second half-courter for Montenegro to pull out the victory. Since their last contest, Serbia has also lost to Israel 89-76. Today’s game will be at Montenegro, so this is a big game all around. If Montenegro wins, the lowest they can place in Group A is second, but if Estonia loses to Israel today, Montenegro can lose all their remaining games, after a win today, and if they lose to Estonia by no more than 12, they will still grab the top spot in the Group. Montenegro comes into the contest today being led by Suad Sehovic averaging 14.7 points per game, while Serbia is paced by Vladimir Lucic’s 16.0 points and 7.0 rebounds per game.

Croatia also has a perfect record at 4-0 in Group C. With Austria and Hungary both sitting at 2-3, if Croatia can beat Cyprus, who’s currently 0-5, they will lock up one of the two top spots in the Group. Cyprus’ leading scorer is Anthony King, who’s dropping in 14.0 points per game and averaging 9.2 rebounds per game. Croatia is led by Bojan Bogdanovic, who’s got an impressive 16.8 points per game average. It’s worthy to note that Dario Saric joined the squad after his team won the U18 European Championships for men and has averaged 13 minutes of playing time, 7 points, 3.5 rebounds, and 1.5 steals per game in the two games he’s played. Saric turned 18 earlier this year (April) and is the youngest player on the Croatian team by roughly 2.5 years, but most of the team is 6-10 years older than he is. Today’s game will be held in Nicosia, Cyprus.

Ukraine is the only team of the four that a loss that can still grab their spot, but sitting at 4-1 in a Group with two teams at 2-3 and one at 0-5 makes it a bit easier. They are currently one point up on Croatia in the Group since they’ve played one more game. The Ukrainians play Austria today, the last time the two squads locked horns was a 61-57 come-from-behind win in Austria that saw the hosts up by as much as 11 points. Austria comes in with Rasid Mahalbasic leading the team in scoring, averaging 17.2 points per game, the leading scorer for the Ukraine is Sergil Gladyr, knocking down 11.4 points per contest. They play in Lviv, Ukraine today.

Italy has gone through their first five contests in very impressive fashion, having an 20.8 point per game margin average. The closest was a nine-point victory over Turkey, the largest margin was 52 over Portugal. Today they play the Czech Republic, who is second in Group F at 4-1. Turkey is in third place at 2-2, so an Italy win assures them at least second place and a spot in Slovenia next September. Italy is led by Danny Gallinari, who averages 15.2 points and 6.6 rebounds per game, while the Czechs are paced by Petr Benda, scoring 14.6 points per game and Lubos Barton’s 8.0 rebounds per game. Today’s game will be played in Trieste, Italy.