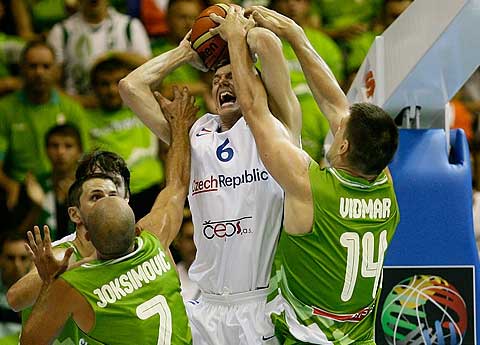 Russia’s Anton Ponkroshov (15) finds getting to the hoop isn’t easy as Italians Marco Cusin (12) and Luigi Datome (13) get in the way with Marco Belinelli (10) looking on.

EuroBasket 2013 is underway in Slovenia with 24 teams battling for six spots in the 2014 FIBA World Cup to be held in Spain. Round 1 consists of four groups of six teams that will play each other once with the top three teams from each group moving on to the second round.

Group C
Georgia – Poland, 84:67
Georgia opened their EuroBasket 2013 campaign with a big first half to cruise to a 17-point won over Poland. Viktor Sanikidze tallied 23 for Georgia, while Marcin Gortat paced Poland with 12 points and 8 rebounds.

The gap grew to 20 deep into the third quarter before a pair of singles in the closing seconds of the third 10 wrapped up the scoring with Georgia up 55:37.

In the fourth Georgia’s advantage continued to expand until it peaked at 25, 76:51, with 3:28 to play. Poland outscored Georgia 16:8 in the final three minutes to cut the lead to 17.

Spain – Croatia, 68:40
The two-time defending champions made quick work of their opening match as they pounded Croatia 68:40. The EuroBasket 2009 and 2011 titleholders put up impressive numbers in the first and fourth quarters, including holding the Croatians to just three points in the final 10 minutes.

A 15 point run in the first quarter set the tone for the contest, with Spain taking the first quarter 24:9. As their offense put them farther ahead, their defense tightened up, keeping Croatia from mounting any serious threats. At the end of the half, Spain held a 33:20 advantage after Croatia outscored them 11:9 in the second.

The third also belonged to the Croatians, but this time only cutting one point from their deficit with a 17:16 third quarter. The clubs headed into the final frame with Spain up 49:37.

The final frame combined the best of the Spanish offensive and defensive efforts, putting up 19 points, while holding Croatia to just three.

Rudy Fernandez led Spain with 15 points, while Marc Gasol added a 14P/11R double-double. Bojan Bogdanovic was team-high for Croatia with 12 points and 7 rebounds.

Slovenia – Czech Republic, 62:60
Host club Slovenia took to the floor in their opening day match with the Czech Republic in front of 4,650 fans that have been waiting quite some time for the EuroBasket competition to roll into their neck of the woods. The locals didn’t play their best game, but it was good enough to get their first win under their belts. Game 2 for the Slovenians will be a little tougher as the square off against Spain.

Slovenia took a slim early lead, getting out to a 21:19 advantage after the first 10, then expanding the lead to four, 36:32, at the half. Their margin grew to as much as nine in the third, before the Czech Republic cut the gap to five at the end of the quarter, 51:46.

The Czechs fought back and knotted the score at 60 with 1:38 to play. Slovenia had their opportunities to close out the game, but went 2 of 6 from the line in the final 43 seconds. The Czech Republic had the ball with seven seconds to play, but Lubos Barton drove into heavy traffic and was whistled for traveling, with two seconds to play, giving Slovenia the win.

Jure Balazic scored 11 points and hauled in 8 rebounds for Slovenia, while Jan Vesely tallied 17 points, 8 rebounds and 3 blocked shots on the day for the Czech Republic.

Group D
Finland – Turkey, 61:55
Finland used a big second quarter to put enough distance between them and the Turkey to come away with one of the bigger upsets of Day 1 with a 61:55 win. Turkey put up a charge at the end, but some key shots down the stretch kept Finland out front for their first EuroBasket 2013 win.

Both clubs had a hard time getting any kind of momentum in the first frame, with Turkey coming up empty for the nearly seven minutes before finally getting in the books. Finland got two points early, then went four minutes before scoring again. At the end of the first, the Fins held a 10:8 advantage. Turkey got the first five of the second quarter to take the lead, but then only scored another six over the last 8:32. Finland rolled in the second, dropping 22 and building a 13-point lead to head into the break up 32:19.

Finland continued to slowly build their lead, until they peaked at 18 points, 42:24, with just under four minutes to play in the quarter. From there on out, the Turks outscored Finland 14:7 to cut the lead to 12 as they headed into the final 10.

Scoring in the fourth was opened with a triple by Shawn Huff, but Turkey continued to drop points until they had cut the lead to five, 52:47, a 14:3 run. As the quarter progressed the margin eventually got to two, with Finland only up 57:55 with 25 seconds to play. Those would be the final points Turkey would get, while Finland would added a free throw and a three-point play to close out scoring at 61:55.

Petteri Koponen and Sasu Salin were game-high with 12 points for Finland while Ender Arsian dropped in 12 for Turkey.

Greece – Sweden, 79:51
Greece got their EuroBasket 2013 campaign started with a 28-point win over Sweden, 79:51. The Swedes led 8:2, but Greece went on a huge scoring run and never looked back. Vassilis Spanoulis led Greece with 13 points, while Jeffery Taylor put up a game-high 16 for Sweden.

After a slow start the Greek club put together a big second quarter to take a 39:21 lead into the halftime break. They continued to add to their lead in second half, outscoring Sweden 20:14 in the third and 20:16 in the fourth.

The Italians got out to an early lead, coming out of the first 10 up 25:18. In the second frame they added another six to the difference outscoring Russia 17:11 to send the clubs into the break with Italy up 42:29.

The margin got to as much as 17 in the third frame, but Russia was able to cut it back to 14 as time expired in the third.

Russia took control in the fourth, cutting the lead down to four points with 24 seconds to play, but couldn’t pull any closer due to missing a couple of key shots and not taking advantage of an Italy turnover with 12 seconds to play.

(See Groups A and B here -> Court Side News)