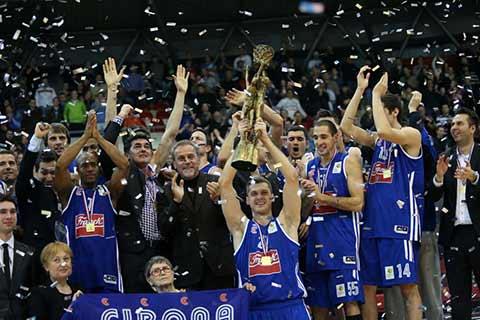 The National Cups were in full swing on Thursday as multiple countries held quarterfinal, semi-final, and even final games. In Croatia, Cibona won their seventh “Krešimir Ćosić Cup” with a 74:72 overtime win over Cedevita. In Israel, Maccabi Tel Aviv earned their 40th Israeli Basketball State Cup with a 76:68 win over Maccabi Haifa. In the Copa del Rey 2013, the Titans of Spanish Basketball squared off in not the finals as they have for the last three consecutive years or the 13 times they’ve met in the finals since it began in 1933. No, FC Barcelona Regal and Real Madrid didn’t get the opportunity to compete for the title as the draw to set up the quarterfinals put the marquee match-up on day one and they didn’t disappoint. It took 50 minutes to get it done, but when all was said and done, the boys from Barcelona had earned a 111:108 win over their long-time rivals to keep their hopes alive to pick up their 23rd Cup and pull even with Madrid on the leader board with the most Cup wins.

Cibona held a one-point margin, 16:15, after the first quarter, but Cedevita grabbed the lead and went up 30:28 at the half. The margin grew by one for Cedevita, 47:44, as they clubs headed into the final frame. Cibona was able to close the gap in the fourth and pulled to a 66-all tie late in the game, with an opportunity for the at the buzzer, but the shot was off it’s mark and the teams prepared for the extra five minutes. Cedevita got out early in overtime, but Cibona reeled them back in as time ran down and Nicevic nailed a jumper to give his club the Cup.

The Artland Dragons, Ratiopharm Ulm, FC Bayern Munich and Alba Berlin have all qualified for the Final Four and the Semi-Final match-ups will be determined by a draw to be held on Wednesday, Feb. 13.

Israel Cup – “State Cup”:
Finals:
Maccabi Tel Aviv – Maccabi Haifa, 76:68
Maccabi Tel Aviv earned their 40th Israel State Cup title and their fourth consecutive Cup with a 76:68 victory over Maccabi Haifa. The Tel Aviv contingent got up early with an 18:25 advantage after the first quarter and extending their margin to 11 at the end of the half, 31:42. Haifa wasn’t about to just hand the Cup over though, and regrouped during the half-time break and came back ready to play. Mid-way through the third Haifa ran off six unanswered to pull to within five, 41:46, and continued to drop in points to get to within one, 48:49. David Logan hit the cords with a triple for Tel Aviv to give them some breathing room heading into the final 10 up 48:52. Haifa took the lead early in the fourth, but then Tel Aviv came back and tied things up at 61. The difference down the stretch was Maccabi Tel Aviv being able to hit the big shot when they needed it and Maccabi Haifa not being able to connect. Tel Aviv outscoring Haifa 7:15 in the last five minutes to hoist the Cup for the 40th time in club history.

Spainish Cup – “Copa del Rey”:
Quarterfinals (Thurs., Feb. 7):
Real Madrid – FC Barcelona Regal, 108:111 2OT
Real Madrid and FC Barcelona Regal have met 13 times in the finals of the Copa del Rey with Barcelona winning eight times and Madrid winning the other five. In the overall records Real Madrid has won the Cup 23 times and finished as runner-up 19 times, and Barcelona has taken the cup 22 times and came up short nine times. The next closest team in the winner’s column as Joventut Badalona, with eight wins. With the history the two powerhouse Spanish clubs come in with, it was a shock when the two were paired against each other in the quarterfinal round of the 2012/13 Copa del Rey.

They hit the courts on Thursday to see which one of the clubs would get the opportunity to add to their win total while the other had to watch from the sidelines like everyone else. It was a match of historical proportions that needed two extra frames to decide and included everything from buzzer beaters to long scoring runs, dunks to long-range triples.

Caja Laboral – CAI Zaragoza, 88:64
Caja Laboral qualified for their 12th straight semi-final appearance with an 88:64 win over CAI Zaragoza. The game was close in the first have with the clubs only separated by a single point after 10, 23:24 and the same margin at the half, 40:41. The difference in the game was the 19:2 run that Caja put together in the third quarter, that led to a 69:54 advantage heading into the final 10. Caja kept up the pressure in the fourth to add nine more to the margin and finish Zaragoza off by 24-points.

Maciej Lampe was high scorer for Caja with 17, Thomas Heurtel added 16, Andres Nocioni dropped in 15. Pablo Aguilar was game-high with 23 for Zaragoza.