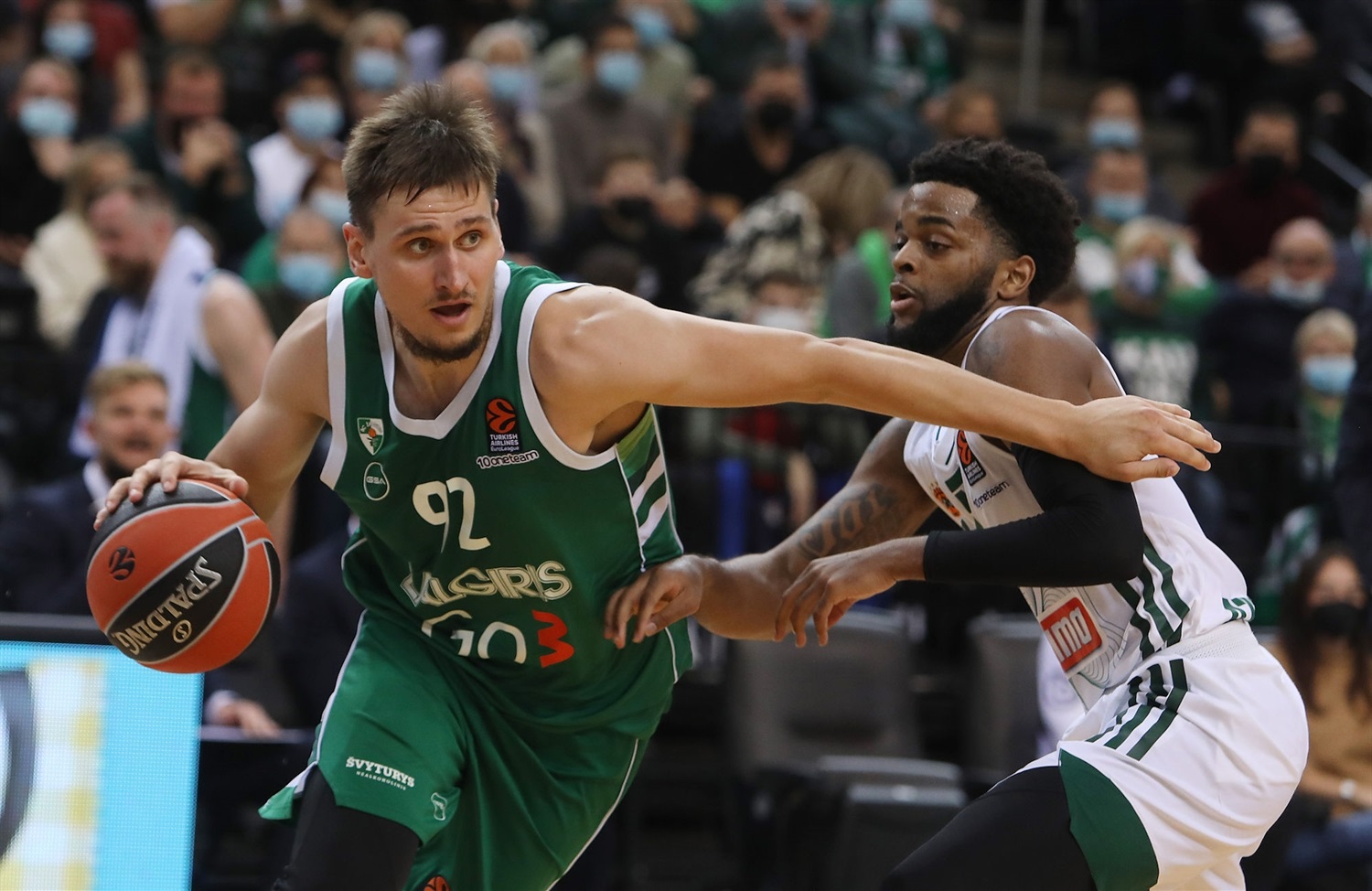 The two-round week for November got underway with a bang on Tuesday. The first of four consecutive days of exciting basketball saw Zalgiris gain its first win of the season, and Baskonia respond to a coaching change with a blowout victory. Zalgiris bested Panathinaikos at home to end its slide. Baskonia blasted Crvena Zvezda in its first game under Coach Spahija, who joined the team the day before. Vladimir Lucic shined for Bayern, which also won at home, defeating Fenerbahce. Tuesday’s lone road winner was Real Madrid, whose Frenchmen Fabien Causeur and Guerschon Yabusele combined for 43 points in their return to France to face ASVEL. Wednesday brings five more games, including league-leader Milan visiting Kazan, Russia, and a showdown between Barcelona and CSKA Moscow.

Zalgiris Kaunas recorded its first 2021-22 Turkish Airlines EuroLeague season win by downing Panathinaikos OPAP Athens 76-69 at Zalgirio Arena on Tuesday. Zalgiris improved to 1-9 in the standings while dropping Panathinaikos to 2-8. Arturas Milaknis led the winners with 13 points, Tyler Cavanaugh scored 12, Edgaras Ulanovas 11, and Marek Blazevic 10 for Zalgiris. Daryl Macon Jr. paced Panathinaikos with 24 points, and Ioannis Papapetrou added 10. Milaknis came off the bench to score seven first-quarter points and got help from Cavanaugh and Ulanovas to give Zalgiris a 20-12 lead after 10 minutes. Blazevic soon boosted the margin to 34-20, but Macon and Papapetrou brought Panathinaikos within 43-37 at halftime. Zoran Dragic and Josh Nebo kept Zalgiris ahead 60-52 at the end of the third quarter. Panathinaikos managed to get within 67-65, but Cavanaugh and Ulanovas took care of business in crunch time.

Real Madrid used a stellar opening quarter to take control on the way to a solid 74-87 road win against LDLC ASVEL Villeurbanne on Tuesday. The victory lifted Real’s record to 8-2, good for at least a hold onto second place, and extended its winning streak against ASVEL to six games going back to 2003. ASVEL dropped to 6-4. A pair of 13-0 runs – the first soon after the opening tipoff and the other bridging the last two quarters – spelled more than enough difference for the visitors against a dangerous ASVEL team. A pair of Frenchmen led Real as Fabien Causeur swished five three-pointers among his 26 points, and Guerschon Yabusele added 18. Walter Tavares had 12 points, ten rebounds, and two blocks for the winners. For ASVEL, Elie Okobo scored 16 of his 26 points in the first quarter but was held in check by Adam Hanga after that. Dylan Osetkowski came off the bench for 14 points while Chris Jones scored 12 for ASVEL.

FC Bayern Munich held off Fenerbahce Beko Istanbul 71-63 in a hard-fought battle at the Audi Dome on Tuesday. A 15-2 run gave Bayern early control, and the hosts stayed in front, 35-30, at the break. Vladimir Lucic had a 10-0 personal run early in the third quarter, but Fener struck back with a 2-14 run to make it close. The visitors could never get ahead, though, and Bayern finished stronger to take the win. Lucic inspired Bayern with 22 points, seven rebounds, three assists, and two steals, while Corey Walden scored 16 points and Augustine Rubit added 13. Marko Guduric led Fenerbahce’s challenge with 16 points, while Jan Vesely scored 12 and Devin Booker added 10. Bayern improves to 4-6, while Fenerbahce drops to 3-7.

Bitci Baskonia Vitoria-Gasteiz celebrated the arrival of new coach Neven Spahija by snapping out of its funk with a convincing 93-74 victory at home over Crvena Zvezda Belgrade to end a four-game losing skid. Baskonia took control of the game with a 22-4 start to the second quarter to build a 23-point lead, which was never in danger the rest of the way under the watch of Spahija, who took over from Dusko Ivanovic on Monday. Steven Enoch led the way with 23 points and 11 rebounds while Rokas Giedraitis drained five three-pointers in scoring 21 points, and Wade Baldwin IV added 14 points in helping Baskonia improve to 4-6. That is the same record now for Zvezda, which was paced by Nikola Ivanovic scoring 21 points off the bench. Maik Zirbes scored 12 points, both Austin Hollins and Ognjen Dobric tallied 11 points, and Ognjen Kuzmic chipped in 10 points in the loss.