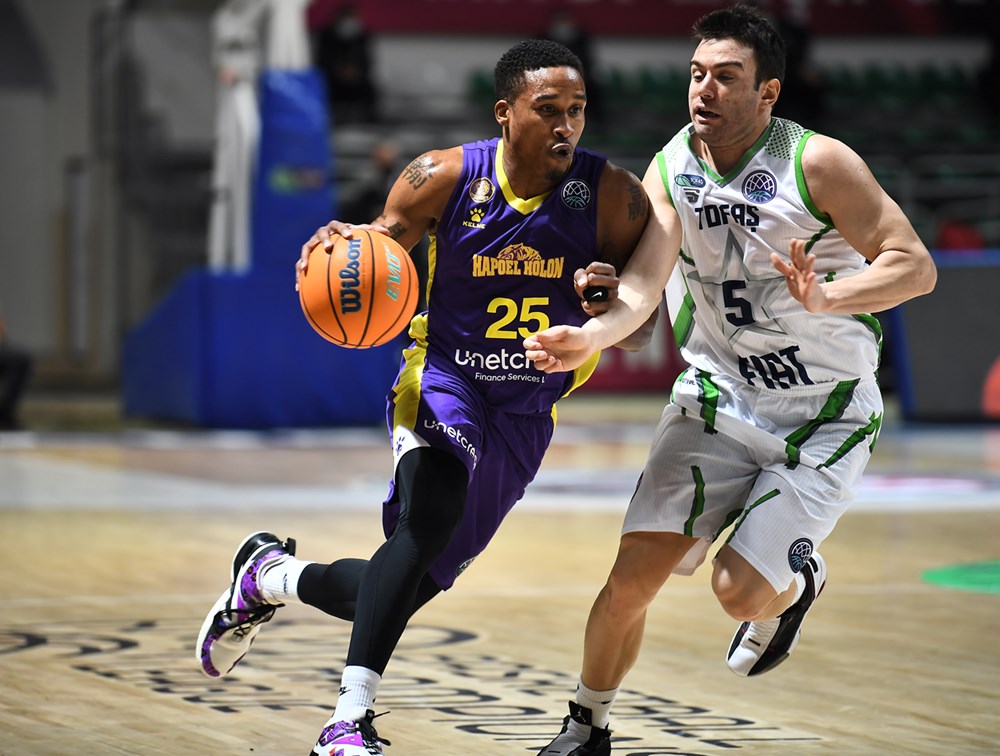 Hereda San Pablo Burgos, ERA Nymburk, and Hapoel Unet-Credit Holon all claimed on Tuesday their second victory in as many games in the Play-Offs and went top of their respective groups.

Burgos scored a century as they rolled over Spanish rivals Lenovo Tenerife. Nymburk snatched a last-gasp victory over Dinamo Sassari, while Holon prevailed at Tofas Bursa in their second consecutive success on the road. Elsewhere on Tuesday, Igokea and Happy Casa Brindisi picked up their maiden wins in the BCL Play-Offs.

Hereda San Pablo Burgos caught fire from downtown and used a 30-9 burst bridging the two middle quarters to pull away from Lenovo Tenerife en route to a triumphant 101-79 victory in the all-Spanish clash of Group J.

The hosts, who shot 17 of 34 from three-point range, appeared to be running away with the game already at the start of the second quarter when Thad McFadden hit a triple, and Jordan Sakho scored with a putback to give Burgos a 17-point lead, 37-20.

Sasu Salin, however, sunk 4 of his first 6 attempts from beyond the arc and scored 16 points by halftime to spark a Tenerife surge, and the visitors tied the scores at 39-39 halfway through the period.

Tenerife’s comeback, though, proved short-lived, as Alex Renfroe drilled a triple almost at the halftime buzzer, and McFadden nailed another three with the start of the third quarter to give Burgos a 60-48 lead.

The gap never fell below 12 points again and the hosts led by as many as 26, as McFadden had 17 points to lead five Burgos players in double digits. Salin finished with a game-high 21 points in defeat.

The reigning BCL champions, who had previously lost twice this season to Tenerife in the Spanish Liga Endesa and Copa del Rey, have now gone top of the group on a 2-0 record Tenerife is joint second, at 1-1.

Hayden Dalton drilled a baseline jumper 1.4 seconds from the final buzzer for ERA Nymburk to clinch a 90-89 comeback win over Dinamo Sassari at home after trailing by as many as 14 points.

Sassari broke away halfway through the second frame and stretched their lead to 56-42 on a Miro Bilan layup 8:12 from the end of the third quarter, but Nymburk scored the last five points in the period to reduce the deficit back to six points, 70-64.

Lukas Palyza sunk a triple 47 seconds from time to cut the gap to just one point, 89-88, and Sassari misfired on the other end.

Retin Obasohan drove to the Sassari basket only for his shot to get blocked at the rim by Jason Burnell, but Sassari failed to maintain possession. Obasohan inbounded the ball as Dalton found a glimpse of daylight just a step inside the arc, enough for him to knock down the game-winning shot.

Jerrick Harding was inspirational for the Czech side and poured in 28 points off the bench, as Nymburk’s second unit contributed 51 points, compared to 20 points from Sassari’s bench.

Omar Prewitt chipped in with 17 points, game hero Dalton had 10 points and 8 rebounds while Stefano Gentile had 18 points and 5 boards for Sassari in defeat.

Nymburk has now improved to 2-0 in the Group L standings, while Sassari, who had held the lead for more than 30 minutes on Tuesday, is now left bottom of the table with two losses in as many games.

Hapoel Unet-Credit Holon prevailed 93-81 at Tofas Bursa to become the first team in this year’s Play-Offs to win back-to-back games on the road, as Tyrus McGee spearheaded a quartet of Holon players that combined for 84 points.

McGee poured in 25 points in 23 minutes, Chris Johnson had 22 points, C.J. Harris added 21, and Isaiah Miles collected a double-double of 16 points and 9 rebounds for the Israeli side.

Tofas got off to a great start and drilled 5 of their first 7 three-point attempts to lead by 8 points in the opening quarter, but McGee came off the bench and scored 13 points by halftime to turn the tide.

The visitors went on a 19-4 run that C.J. Harris capped off with a triple right before the five-minute mark in the second frame to give Holon a 36-29 lead. Tofas balanced proceedings and tied the scores at 45 before the interval but never reclaimed the lead.

Harris sunk two free-throws to give Holon their first double-digit lead, 81-70, and Isaiah Miles followed up with a layup to extend it to 13 points, and the Israeli team held off their hosts at arm’s length with relative ease in the final five-minute stretch.

Igokea claimed their first-ever road win in the BCL and their first success in the Play-Offs, after Anthony Clemmons and Edin Atic led the Bosnia and Herzegovina side to a 91-75 victory at VEF Riga.

Riga claimed a six-point lead in the first quarter that proved short-lived, as the opening half saw six lead changes, and everything up until the interval pointed to a close game that would be determined on details.

Igokea threw that script out the window, though, when they returned from the locker room. Edin Atic scored with a layup 8:10 from the end of the third frame, and Anthony Clemmons followed up by converting a four-point play to spark a 16-2 run, and the hosts jumped ahead 66-50 in the blink of an eye.

VEF momentarily reduced the deficit back to 7 points, but Darko Talic knocked down a triple right at the third buzzer to make it 73-63 for Igokea, and the visitors stretched the gap to as many as 18 points in the final stanza.

Atic and Clemmons finished with 23 points apiece on a combined 9 of 15 from behind the three-point arc, with the former also adding 7 rebounds and the latter dishing 6 assists. Kyle Allman had 20 points and 7 assists for VEF in a losing effort.

Darius Thompson delivered an all-around display to lead Happy Casa Brindisi to an 83-79 win over Pinar Karsiyaka at home, the Italian team’s maiden victory in the BCL Play-Offs.

Brindisi’s perimeter defense held their visitors to just 5 of 25 shooting from three-point range, and Thompson collected 23 points, 6 assists, 5 rebounds, and 4 steals to pace the hosts.

The Italian side jumped in the driver’s seat right away and led by as many as nine points in the opening stanza, but Karsiyaka balanced proceedings by the end of the first half.

With the scores tied at 42 and 5:52 remaining to the end of the third period, Thompson scored with a floater to spark a 23-7 Brindisi burst.

Raphael Gaspardo converted a three-point play to stretch the gap to 19 points at the start of the final frame, 67-49, Brindisi’s biggest lead all night.

While Karsiyaka decided the time had come to mount a comeback attempt, time was on the hosts’ side, and they held on to the lead until the end.

Josh Bostic, Brindisi’s last signing, had 22 points and 4 assists, and Nick Perkins chipped in with 19 points and 5 rebounds. Amath M’Baye finished with 21 points and 5 boards for Karsiyaka in a losing effort.

The two teams are now tied at 1-1 in second place in the Group I standings.