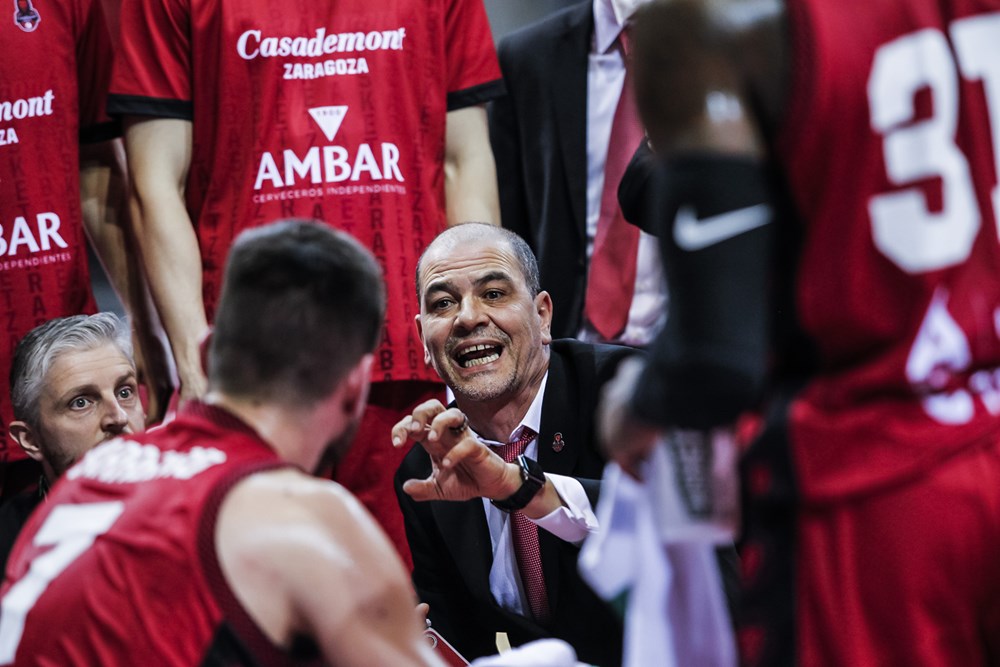 Casademont Zaragoza went 2-0 in Group L on Wednesday after inflicting upon Brose Bamberg — the only team that concluded the Regular Season on a 6-0 record — a second loss in as many games in the Play-Offs.

Meanwhile, over in Group K, AEK and Nizhny Novgorod both got off to a winning start in the Play-Offs, as the Greek team stifled Turk Telekom at home and the Russian team celebrated a comeback road victory at SIG Strasbourg.

Elias Harris led Casademont Zaragoza to a 77-65 win over his former team, Brose Bamberg, who have now lost both of their first two games in the Play-Offs after concluding the Regular Season undefeated.

Zaragoza, on the other hand, has joined ERA Nymburk at the top of the Group L standings on a 2-0 record, and they are playing host to the Czech team next week, and the winner of that clash will get off to a 3-0 start in the group.

The Spanish team forced Bamberg to look for scores exclusively in half-court play – the German team only scored 4 points in transition the entire night – and enjoyed the view from the driver’s seat for all but 45 seconds during the first half.

The hosts, however, didn’t manage to shake off the visitors during the first three quarters and only claimed their first double-digit lead 8:12 from the final buzzer when Spanish international Jonathan Barreiro sunk two free-throws to stretch Zaragoza’s cushion to 58-47.

With Bamberg struggling offensively, a comeback attempt looked very unlikely, and the Spanish side held on to their comfy lead with ease until the final buzzer.

Harris finished with 17 points, his best scoring display in the BCL since he played for Bamberg in the 2018-19 edition of the competition. Fellow German Robin Benzing had 13 points while Dylan Ennis chipped in with 15 points. For Bamberg, David Kravish had a near double-double of 17 points and 9 rebounds in a loss.

Daryl Macon had a dreamy first BCL game with AEK, and the Greek team started on the right foot in Group K as they held a Turk Telekom side that was unbeaten in the competition since November 11 to a season-low 65 points.

AEK prevailed 74-65 as Macon, who moved to AEK from Galatasaray after the end of the BCL Regular Season, paved the way with 20 points on a perfect 10 for 10 from the free-throw line, 4 assists, and 3 rebounds.

The Athens team committed 10 turnovers early on, and Turk Telekom took advantage to jump ahead 18-16 shortly after the start of the second quarter.

But Macon tied the scores from the stripe and then drilled a triple right before the six-minute mark in the second period to put AEK ahead 21-18.

AEK, who started taking care of the ball and slowed down Turk Telekom, never abolished the lead again. The hosts even stretched the gap to 15 points, 64-49, on a trademark Keith Langford step-back triple 5:53 from the final buzzer.

Jonas Maciulis had 15 points and 3 rebounds for the winners, and Langford finished with 10 points. For the visitors, who shot a disastrous 17.6 percent (3 of 17) from three-point range, Nick Johnson and Kyle Wiltjer had 14 points apiece, the former also adding 5 rebounds.

Nizhny Novgorod found themselves trailing SIG Strasbourg by 15 points early on but pulled off a 73-68 road win in France, spearheaded by Kasey Shepherd’s BCL career-high 26 points.

This was the Russian team’s opener in Group K, while Strasbourg has now suffered two defeats in as many games and are bottom of the group standings.

Strasbourg raced to a 22-7 lead shortly before the end of the first quarter, and although the Russian team snapped out of their calamitous start, the hosts still maintained a 7-point lead at halftime.

Shepherd, however, drilled a triple 7:23 from the end of the third frame to give Nizhny their first lead of the night, 40-39, and the two teams traded started trading blows with the lead changing hands a further six times until halfway through the final stanza.

Sergey Toropov knocked down a three-pointer 4:54 from the final buzzer to give Nizhny a four-point cushion, 64-60, and the Russian team held off Strasbourg down the stretch.

The French team’s abysmal shooting was of great assistance to Nizhny in those final minutes, as the hosts shot only 34 percent from the two-point range.

Shepherd collected his 26 points on 10 of 18 shooting and added 7 rebounds and 3 assists, while Toporov had a near double-double of 9 points and 11 rebounds. For Strasbourg, Brandon Jefferson finished with 20 points in a losing effort.