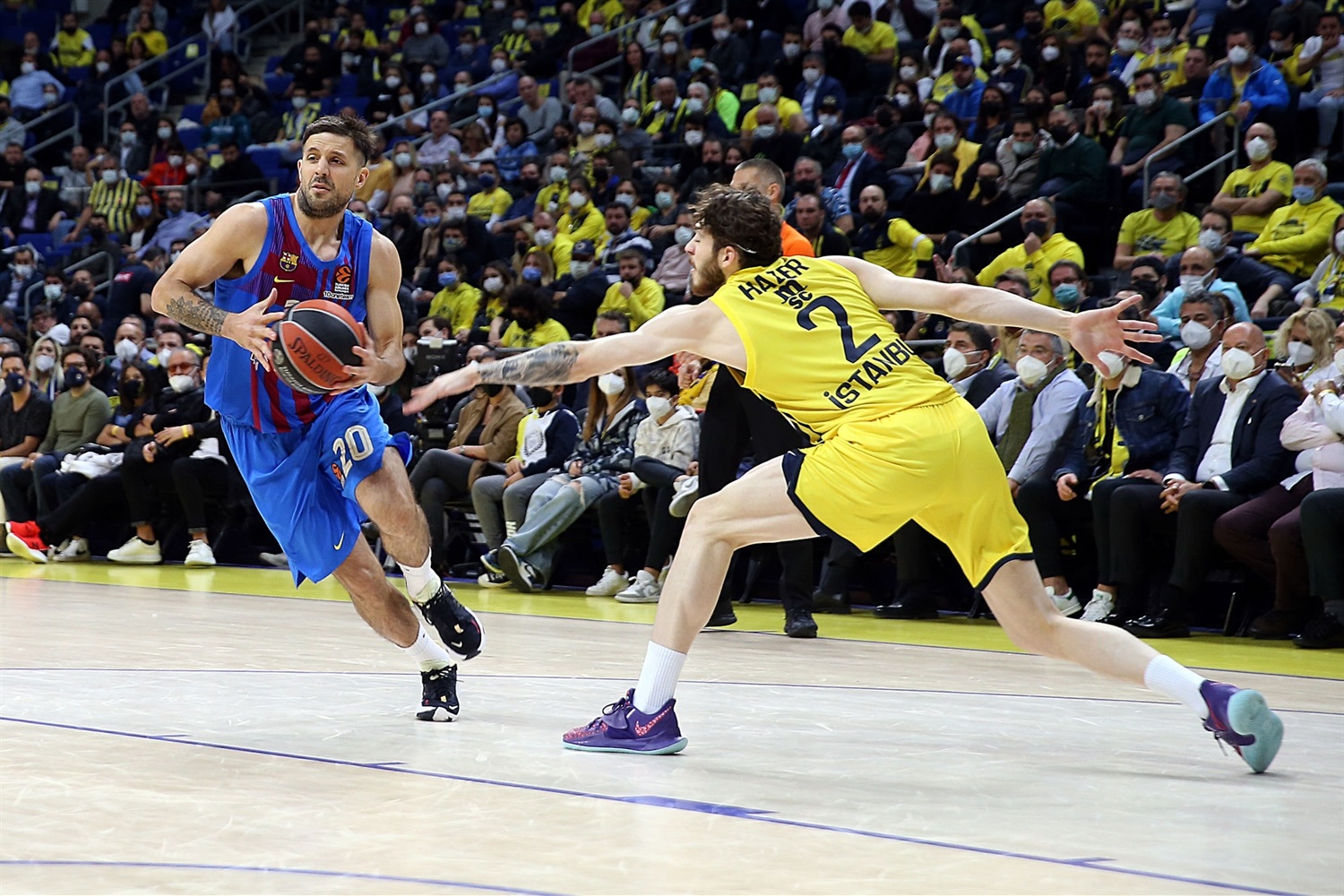 Barcelona only undefeated team in Euroleague

Thanks to another game-winning shot from Nikola Mirotic, Barcelona is now the only unbeaten team left through six rounds after outlasting Fenerbahce 74-76 in Istanbul. Barca is alone at the top because Bayern turned back previously perfect Milan 83-77, getting revenge for their five-game playoff series result last spring. Three more home winners to open Round 6 were Monaco, shutting down Zvezda 70-62; Maccabi, taking its third decision in a row against Zalgiris, 76-62; and Olympiacos, which shook off ALBA 87-83. Four more Round 6 games are set for Wednesday. In Russia, Baskonia visits UNICS, and Zenit hosts Real to get the action rolling. Later, ASVEL welcomes CSKA to France, and Efes visits Panathinaikos in the Greek capital to finish the round.

AS Monaco held off Crvena Zvezda Belgrade 70-62 in a close battle in the principality on Tuesday night. Monaco raced into a double-digit lead early in the second quarter, but Crvena Zvezda used a 0-10 run to get back into the game, and it was 41-36 at halftime. The visitors started the second half strong to move ahead briefly, but Monaco battled back and led throughout a fiercely contested but low-scoring fourth quarter. The excellent Alpha Diallo led Monaco all over the court with 19 points, seven rebounds, two assists, and three steals. Donatas Motiejunas added 14 points and eight rebounds, and Danilo Andjusic scored 12. Nate Wolters paired 18 points with five assists for Zvezda, Nikola Kalinic scored 14, and Ognjen Kuzmic had 10. Monaco improves to 3-3, while Crvena Zvezda – which only scored 9 points in the fourth quarter – drops to 2-4.

In a classic battle that seesawed until the finish, FC Barcelona proved one shot tougher in downing host Fenerbahce Beko Istanbul 74-76 on a buzzer-beating game-winner from Nikola Mirotic on Tuesday. Barcelona stayed unbeaten at 6-0 while Fenerbahce’s second straight one-point loss dropped its record to 2-4. After Devin Booker tied it 74-74 with 6.2 seconds left on a smashing dunk, Barcelona looked for Mirotic in the post, where he scored a twisting shot off the backboard for the win. Cory Higgins paced the winners with 18 points, and Brandon Davies added 16 while Nick Calathes chipped in 11 plus 7 assists. Fenerbahce got 24 points from Jan Vesely and 17 from Marko Guduric.

Olympiacos Piraeus bounced back from its last defeat in Moscow and claimed a hard-fought 87-83 victory over visiting ALBA Berlin at the Peace and Friendship Stadium on Tuesday night. The reds improved to 4-2, with a perfect 4-0 record at home, while the German champs dropped to 2-4. The Reds used a tremendous offensive performance to amass a 16-point advantage, 45-29, midway through the second quarter and endured all ALBA attempts to come back. Oscar da Silva scored 9 points in the last 5 minutes to bring the visitors within 84-81 with 19 seconds to go. Still, free throws by Tyler Dorsey and Sasha Vezenkov allowed Olympiacos to celebrate. Dorsey led the winners with 13 points on 6-of-6 shooting from the free-throw line. Kostas Papanikolau followed with 12 – all of them in the first quarter, and Kostas Sloukas finished with 10 points and six assists. Da Silva poured in 17 points to pace ALBA, with Maodo Lo, Jaleen Smith, and Louis Olinde in double-digits with 11, 10, and 10 points, respectively. Luke Sikma was 1 point and two assists shy of a triple-double in the losing effort.

Maccabi Playtika Tel Aviv registered its third consecutive win, using its best defensive effort of the season en route to a 76-62 victory over visiting Zalgiris Kaunas at Menora Mivtachim Arena on Tuesday night. It was Maccabi’s third consecutive win that improved it to 4-2, while Zalgiris remains the only winless team after Round 6. Maccabi took control with Derrick Williams and Ante Zizic dominating inside in the first half and held a 39-30 halftime lead before extending the margin to double digits in the third. Maccabi led by as many as 19 points early in the fourth quarter before Zalgiris trimmed the deficit in the final 4 minutes of the game. Williams collected 17 points plus seven rebounds, and Zizic had 14 points and nine rebounds in a victory. James Nunnally scored 15, and Keenan Evans 13 points for Maccabi. Arturas Milaknis netted 17 points on 5-for-9 three-point shooting for Zalgiris, and Josh Nebo had 10 points and nine rebounds in a losing effort.

In a rematch from last season’s playoffs, FC Bayern Munich defeated previously undefeated AX Armani Exchange Milan 83-77 at home on Tuesday. Bayern improved to 2-4 in the standings while Milan dropped to 5-1. Vladimir Lucic led the winners with 20 points, Darrun Hilliard added 17, Corey Walden had 16, and Othello Hunter pulled down ten rebounds for Bayern. Nicolo Melli led five Milan scorers in double digits with 16 points. Luigi Datome added 14, Dinos Mitoglou 13, Sergio Rodriguez 11, and Kyle Hines 10. Hilliard led a 9-0 run which gave Bayern an early 11-4 lead. Melli and Datome rescued Milan, and then Mitoglou and Rodriguez helped the visitors to a 21-24 lead after 10 minutes. Melli kept pushing Milan, but Lucic and Walden allowed Bayern to tie the game, 39-39, at halftime. Bayern found a go-to guy in Hilliard, who allowed the hosts to take a 59-54 lead at the end of the third quarter. Walden had 8 points in a 10-0 run that put Bayern on the right track, and even though Milan got within 78-74, DeShaun Thomas buried a three-pointer that sealed the outcome.