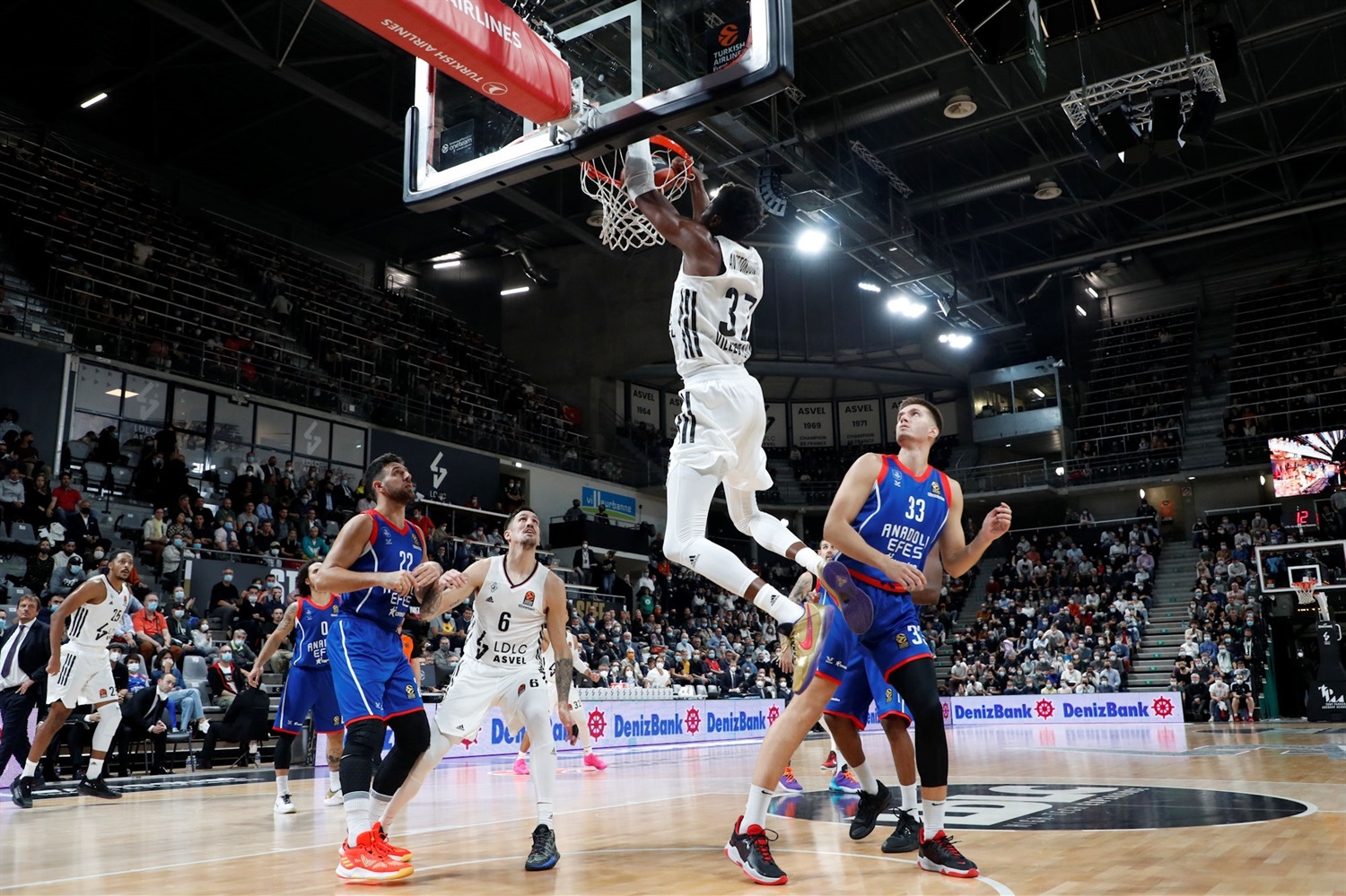 ASVEL Villeurbanne comes back from 19 points down in Euroleague game vs. Fenerbahce

The first two-round week of the Turkish Airlines EuroLeague Regular Season was great for the local supporters in the stands; all six teams playing at home on Tuesday won. LDLC ASVEL Villeurbanne came back from 19 down to stun Fenerbahce Beko Istanbul, while AX Armani Exchange Milan rolled past Maccabi Playtika Tel Aviv. UNICS Kazan, Baskonia Vitoria-Gasteiz, and ALBA Berlin each won their first games this season. In doing so, the two teams became the first in the league to three wins this season.

UNICS Kazan recorded its first win of the 2021-22 Turkish Airlines EuroLeague season by downing FC Bayern Munich 73-70 at home on Tuesday. UNICS improved to 1-2 in the standings while Bayern dropped to 0-3. Isaiah Canaan led the winners with 21 points, Lorenzo Brown added 17, and Mario Hezonja had 15 for UNICS. Darrun Hilliard paced Bayern with 17 points, Corey Walden added 16, and DeShaun Thomas and Ognjen Jaramaz had 11 for the guests. Walden, Hilliard, and Nick Weiler-Babb struck early from downtown to give Bayern a 12-19 lead after 10 minutes. Hilliard had the opening 8 points in a 2-14 run, which allowed the visitors to take a 19-35 margin midway through the second quarter. UNICS got within 26-37 at halftime and even closer, 45-50, at the end of the third quarter. Hezonja capped a 13-0 run with a wild three-point play that completed the comeback, 51-50. Canaan had 8 points and a couple of assists in another 13-0 run that saw UNICS surge to a 67-55 lead and hold on for a come-from-behind victory.

On Tuesday evening, Toko Shengelia erupted for a career-high 33 points to lead CSKA Moscow to a 77-67 victory over Zenit St Petersburg at Megasport Arena in the Russian capital. CSKA won its second straight game to improve to 2-1 and dropped Zenit to the same record. CSKA never trailed, largely thanks to Shengelia, who scored 8 in a row during a 16-2 start to the game. He also collected a team-high eight rebounds and added two assists and two steals. Will Clyburn tallied 16 points and seven boards for the winners. Jordan Loyd led Zenit with 19 points.

Rallying from a 19-point second-half deficit, LDLC ASVEL Villeurbanne stayed unbeaten and tied for first place when it stopped visiting Anadolu Efes Istanbul with a thrilling 75-73 decision on Tuesday behind 16 points from Chris Jones. ASVEL is 3-0 for the first time in its seven EuroLeague seasons this century and tied for first place. Defending champion Efes fell to 0-3. Efes led 37-56 midway through the third quarter before ASVEL reeled it back, little by little, until taking its first lead, 71-70, with just under 2 minutes left. Efes tied it after that, but Kostas Antetokounmpo’s put-back with 12 seconds remaining decided the outcome. William Howard followed Jones with 13 points for ASVEL. Paul Lacombe added 11, while Dylan Osetkowski and Antetokounmpo had ten each. Elie Okobo dished ten assists for ASVEL. Efes got 24 points from Vasilije Micic, 15 from Shane Larkin, and 13 from Rodrigue Beaubois but suffered from 11 turnovers and 3-for-14 three-point shooting after halftime.

ALBA Berlin used a dominant second-half performance to beat Fenerbahce Beko Istanbul 84-70 for its first victory of the young season. After scoring 27 points in the first half, the German champs poured in 30 points in the third quarter and 27 more in the final frame to give Israel Gonzalez his first win as ALBA head coach. Oscar da Silva collected 22 points and five rebounds in just his second EuroLeague game to lead ALBA, while Maodo Lo scored 21 points with five assists and Luke Sikma tallied 13 points, nine rebounds, five assists, and three steals as ALBA moved to 1-2. That is the same record as Fenerbahce, for which Nando de Colo collected 15 points and eight assists while Ahmet Duverioglu scored 12 points and Jan Vesely chipped in 6 points and 11 rebounds.

Baskonia Vitoria-Gasteiz gained its first win of the season by overcoming Panathinaikos OPAP Athens 81-79 in a thriller that came down to the final shot at Fernando Buesa Arena on Tuesday. The first half swung back and forth, with both teams enjoying small leads, never bigger than 6 points. Baskonia was briefly ahead by 11 early in the second half. Still, Panathinaikos battled back, and the lead continued to regularly change hands before free throws from Jayson Granger gave Baskonia the win – but only after Ioannis Papapetrou missed a three-pointer on the final buzzer. Rokas Giedraitis and Simone Fontecchio led the way with 16 points apiece for Baskonia, while Tadas Sedekerskis added 15 and Jayson Granger paired 12 points with nine rebounds. Papapetrou paced Panathinaikos with 22 points, and Daryl Macon added 13. Both teams now have 1-2 records.

On Tuesday, AX Armani Exchange Milan remained undefeated in the Turkish Airlines EuroLeague after defeating Maccabi Playtika Tel Aviv 83-72 at Mediolanum Forum. Milan improved to 3-0 in the standings while Maccabi dropped to 1-2. Devon Hall paced the winners with 17 points. Dinos Mitoglou added 16 and Malcolm Delaney 10 for Milan. Derrick Williams led Maccabi with 19 points, James Nunnally added 16, Jalen Reynolds 13, and Mathias Lessort 10. Delaney and Nicolo Melli fueled an early 17-2 run that helped Milan to a double-digit margin, 26-15, after 10 minutes. Mitoglou struck three times from downtown in the second quarter and got plenty of help from everyone to break the game open, 52-30, at halftime. Maccabi kept trying after the break, but Milan kept a safe margin throughout the second half, cruising to a well-deserved win.