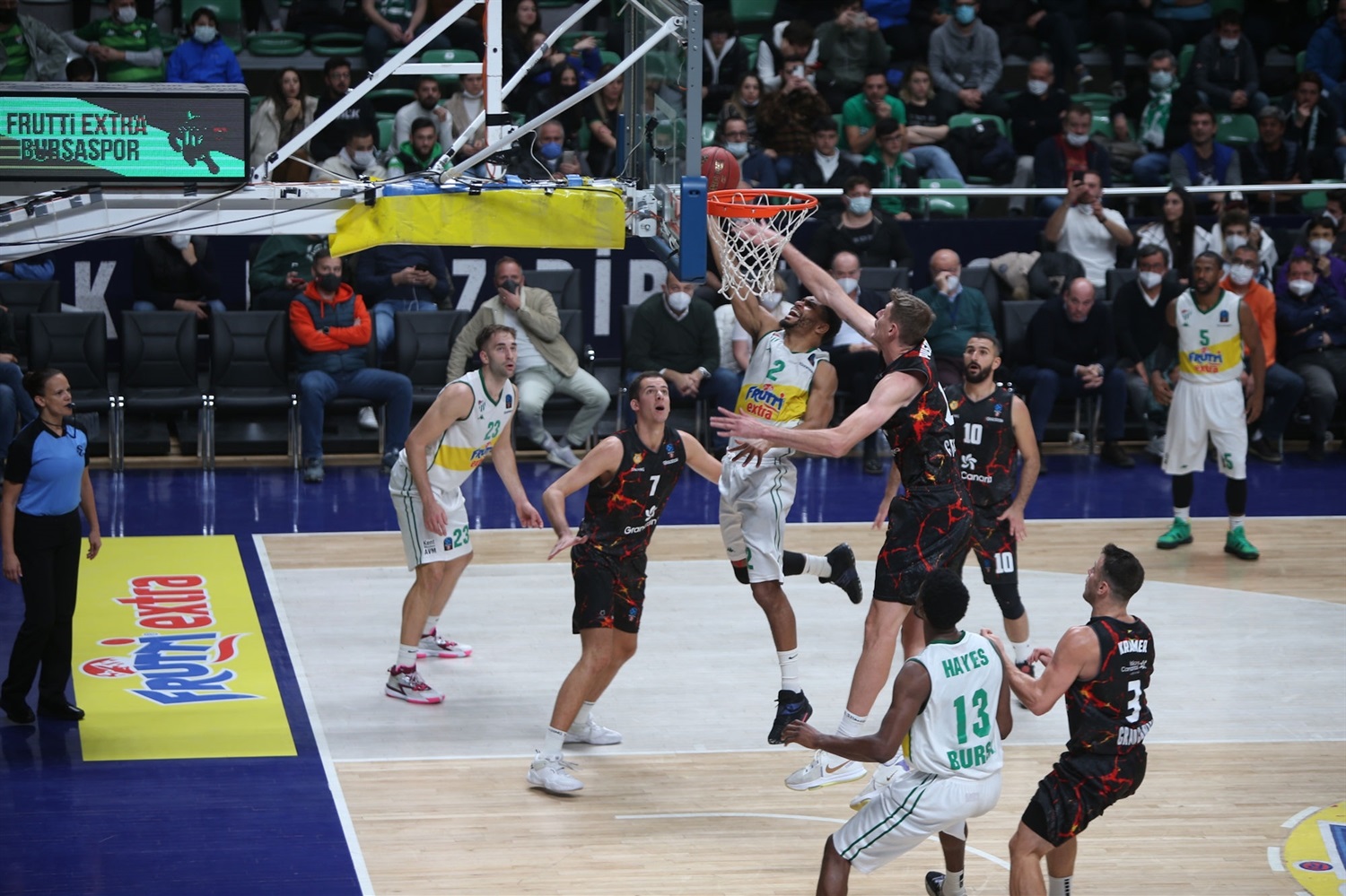 Another road trip, another road win for Gran Canaria, which registered its fourth consecutive triumph by beating Frutti Extra Bursaspor 74-85 to improve to a share of the EuroCup’s best record at 4-1.

Three of those victories have come on the road during the winning streak, and this one came with a double-digit margin. It also came despite going into the game without its second-best scorer, Nicolas Brussino, and his 13.3 points per game, as well as point guard Andrew Albicy, who ranks second in the EuroCup with 7.5 assists per game.

There was more Eurocup action on Wednesday night.

Partizan NIS Belgrade bounced back from its first loss of the season last week by holding off visiting Lietkabelis Panevyzis 84-77 at Stark Arena on Wednesday night. Even though the hosts were never behind and enjoyed double-digit margins several times after halftime, they needed to wait till the last minute to celebrate a victory that lifted their record to 4-1. Zach LeDay led six Partizan scorers in double figures with 19 points. Alen Smmailagic posted a double-double of 13 points and 12 rebounds for a PIR of 20, all career-best. Gregor Glas also scored 13, Aleksa Avramovic and Bolsa Koprivica provided 12 each, and Kevin Punter poured in 11, including the decisive bucket with 12 seconds to go. Gedeminas Orelik paced Lietkabelis with 19 points, followed by Kaspars Berzins and Kristupas Zemaitis, who scored 12 apiece. Vytenis Lipkevicius flirted with a triple-double as he posted 7 points, ten rebounds, and seven assists for the visitors, who dropped to 2-3.

Gran Canaria led from start to finish in beating Frutti Extra Bursaspor 74-85 on Wednesday night. It is Gran Canaria’s fourth consecutive win, which improved the team’s record to 4-1 atop of Group B, while Bursaspor dropped to 2-3 on the season. The visitors took control from the get-go and then used two big third-quarter runs to open a 20-point advantage. Bursaspor attempted a late rally but never got closer than 9 points. John Shurna and Artem Pustovyi scored 20 apiece for Gran Canaria. Pustovyi also had seven rebounds. Dylan Ennis netted 15, while A.J. Slaughter had 13 points and six assists. Allerik Freeman scored 17 points for the hosts, David Dudzinski collected 16 points and seven rebounds, Andrew Andrews tallied 10 points and eight assists, and Kevarrius Hayes also scored 10 in a losing effort.

Buducnost VOLI Podgorica blasted Cedevita Olimpija Ljubljana 91-60 in a battle between old rivals in the Montenegrin capital. Buducnost improved to 4-1 in the standings while Cedevita dropped to 2-3. Justin Cobbs led the winners with a career-high 33 points, Jacob Wiley added 15, Petar Popovic 13, and D.J. Seeley 10 for Buducnost. Melvin Ejim paced Cedevita with 14 points while Edo Muric added 10. Cobbs was unstoppable in the first half, and Vladimir Micov buried a triple that made it a double-digit game, 39-29, near halftime. Cobbs buried three consecutive three-pointers, and Seeley also struck from beyond the arc to break the game open, 61-43, and Buducnost controlled the game until the final buzzer.

Promitheas Patras took charge in the second half to defeat ratiopharm Ulm 65-71 on Wednesday at ratiopharm Arena for its second straight win. The visitors fell behind early but closed to within 32-31 at halftime before Kendrick Ray and Isaiah Miles heated up in the third quarter to give Promitheas a lead, which it added to and led by as many as 13 in the fourth to secure the win. Ray finished with 14 points and six assists, Miles scored 11, and Jerai Grant scored ten as Promitheas improved to 2-3 in Group B. Thomas Klepeisz scored a career-high 22 points to lead Ulm, which fell to 2-3. Semaj Christon added 20 points and four assists, and Fedor Zugic scored 11 in defeat.

In yet another tight battle, Valencia Basket survived an offensive spectacle in defeating Mincidelice JL Bourg en Bresse 98-95 at home. Valencia wasted a 13-point lead but collected the win thanks to some late-game heroics from Sam Van Rossom to move to 3-2. Since Valencia’s 10-point season-opening win versus Promitheas Patras, Coach Joan Penarroya’s team lost twice by one point and won by a single point before the three-point win over Bourg. Xabi Lopez-Arostegui paced five Valencia players in double figures with 18 points while Jaime Pradilla and Jasiel Rivero both scored 16 points, Klemen Prepelic tallied 15 points, and Bojan Dubjlevic chipped in 13 points, six rebounds, and four assists. Bourg dropped to 1-5 despite outstanding showings from Rasheed Sulaimon, who had 25 points, and CJ Harris, who collected 24 points. JaCorey Williams netted 16 points and Axel Julien 14 in the defeat.