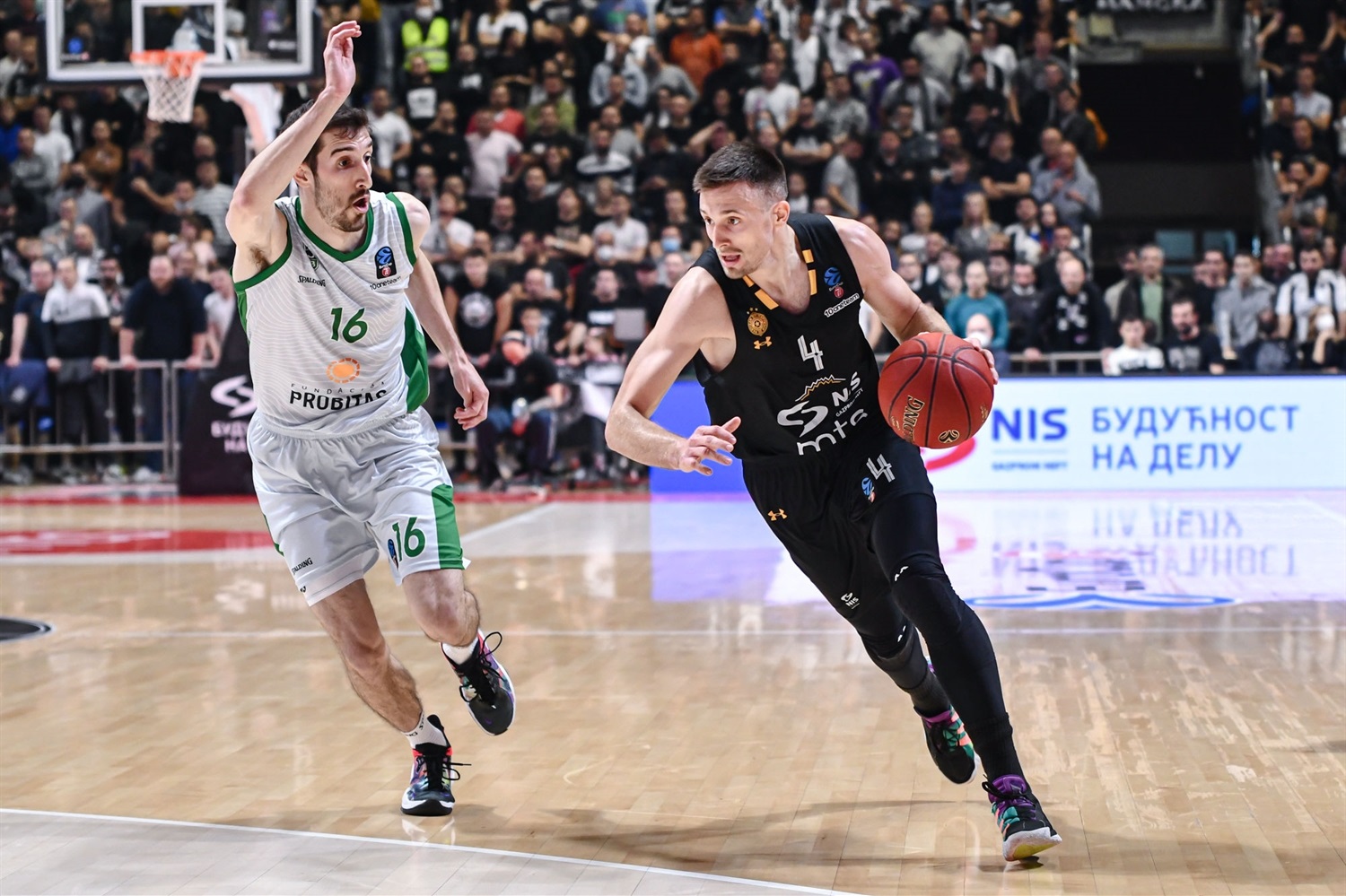 The first half of Round 3 was an eventful one with a thriller decided in the final seconds, a blowout for a team’s first win, and two other teams getting their first road wins. The action began in the Turkish capital, where Turk Telekom Ankara outlasted Slask Wroclaw 89-73 in a game that saw Tyler Ennis return to action for the first time in 11 months. Then MoraBanc Andorra held off Hamburg Towers 91-77. Lietkabelis Panevezys overpowered Trento, with Panagiotis Kalaitzakis providing the fireworks. Those wins were Andorra’s and Lietkabelis’s first on the road this season. Tuesday’s only other Group A game was a thriller that saw Partizan NIS Belgrade become the first team to three wins when it edged Joventut Badalona 68-67 thanks to Kevin Punter’s heroics. In Tuesday’s lone Group B clash, Minicidelice JL Bourg en Bresse dismantled Promitheas Patras 92-62 for its first victory of the season. Action resumes with five more Wednesday encounters, including a battle for first place in Group B between undefeated sides Buducnost VOLI Podgorica and Virtus Segafedo Bologna.

Turk Telekom Ankara stayed perfect at home with an 89-73 victory over visiting Slask Wroclaw on Tuesday. Turk Telekom improved to 2-1 in Group A, where Slask continues searching for a win. Aaron Harrison exploded for the winners with 25 points on his way to a career-high 34 performance index rating. Aubrey Dawkins added 18 points for Turk Telekom while JaJuan Johnson had 16 and 9 rebounds and Alex Perez dished ten assists. Turk Telekom led by 13 early, but Slask rallied in the second quarter to lead by 34-40. Slask stayed ahead until Harrison’s first basked of his 18 second-half points tied it, 46-46, not long before Turk Telekom went ahead for good, using its defense to win the fourth quarter 21-8 and take the victory. Slask got 22 points and eight assists from Travis Trice, 15 points from Kodi Justice, and 12 from Cyril Langevine. Kerem Kanter added a double-double of 10 points and 11 rebounds, but the visitors lost Jakob Karolak to injury midway through the game.

MoraBanc Andorra claimed its first road win of the 7DAYS EuroCup season by holding on to beat Hamburg Towers 91-97 on Tuesday night at edel-optics.de Arena. The visitors led by as many as 15 in the third quarter before Hamburg rallied to twice get within 1. Codi Miller-McIntyre shined down the stretch to propel Andorra to victory and a 2-1 record. Drew Crawford led the winners with 21 points and seven rebounds, Miller-McIntyre finished with 17 points and 11 assists, his backcourt mate Clevin Hannah tallied 13 points and five assists, Mario Nakic added 11 points and seven boards, and David Jelinek scored 10. Caleb Homesley scored 22 points to pace Hamburg in defeat, Ray McCallum had 17 in his EuroCup debut, and Maik Kotsar netted 16 points. The loss dropped Hamburg to 0-3.

Liettkabelis Panevezys claimed a valuable 61-77 victory against Dolomiti Energia Trento at BLM Group Arena on Tuesday night, which lifted the club’s record to 2-1 in Group A and snapped a seven-game road losing streak. Lietkabelis amassed a double-digit lead, 12-24, at the end of the first quarter and managed to resist against a third-quarter rally by Trento, who tied it at 43-43. A 1-10 run led by Panagiotis Kalaitzakis helped the visitors regain a solid margin that Gediminas Orelik confirmed with 7 points in a row in the last 5 minutes to seal the win. Kalaitzakis had another impressive offensive performance with 20 points on 4-of-5 three-point shooting to pace the winners and found helpful contributions from Orelik, Djordje Gagic, and Vytenis Lipkevicius, whos scored 14, 11, and 10 points, respectively. Jonathan Williams posted 18 points and eight rebounds, and Cameron Reynolds added 13 and 6 for Trento, which dropped to 0-3.

In a thriller that came down to the final seconds, Partizan NIS Belgrade remained undefeated in Group A by downing Joventut Badalona 68-67 in the Serbian capital on Tuesday. Partizan improved to 3-0 in the standings while dropping Joventut to 2-1. Kevin Punter led the winners with 18 points, including three jumpers in the final minute Partizan needed to win the game. Zach LeDay added 13 for Partizan. Joel Parra paced Joventut with 15 points, Derek Willis added 11, and Ante Tomic had 10. Willis and Parra gave Joventut an early 2-11 lead. LeDay, Punter, and Rodions Kurucs fueled an 11-0 run, allowing Partizan to take a 19-17 edge after 10 minutes. Vladimir Brodziansky and Pau Ribas rescued the visitors, and Andres Feliz hit a floater for a 34-39 Joventut margin at halftime. Parra buried a triple to give Joventut a double-digit margin, 43-54, late in the third quarter. Partizan fought back, and Punter put the hosts ahead, 66-65, already in the final minute. Ribas hit a jumper, but so did Punter to win it.