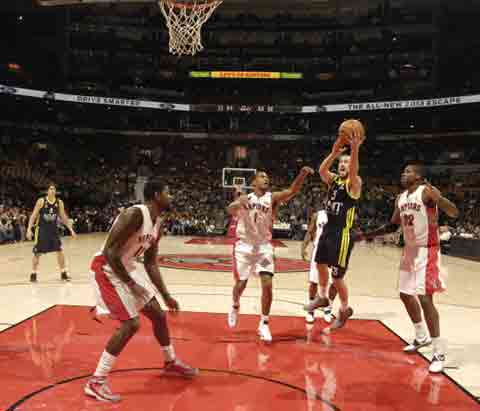 The Euroleague American Tour 2012 wrapped up yesterday with the NBA squads running the table on their European counterparts, 4-0. Yesterday saw Real Madrid venture into Canada to take on the Raptors of Toronto and Montepaschi Siena headed North from their last contest in San Antonio to square off in Cleveland against the Cavaliers. Both games were close down to the wire, drawing added mutual respect for each league and an increased awareness of the quality of basketball being played in Europe by North American hoops fans.

It took the Raptors some time to get acclimated to the fast-paced style of play the Madrid squad put on the floor, but they made some early adjustments, dusted off some cobwebs in their own offense and came away with a hard-fought seven-point win against the scrappy Spaniards. Real Madrid traveled with four team members that won silver medels in the 2012 London Olympics.

Raptors rookie Terrence Ross saw the court for the first time as a professional hoopster and said, “it gave me a sense of how much I’ve done to get to the point I’m at now,” on how it felt to put on is first pro uniform. The rook chucked up an air-ball on his first big-time three-ball, but settled in for a productive opener tallying 10 points in 22 minutes of floor time. The biggest difference between college ball and the NBA? The speed, “Most of the guys are veterans, they’ve been playing this for a long time, so it’s a lot different from college kids to grown men,” he said. “You’ve got to be a second quicker [getting your shot off], you’ve always got to do something a little better, jump a little higher, get a little more arc.”

DeMar DeRozan paced Toronto with 18, John Lucas dropped in 16 and Andrea Bangani contributed 14 in the pre-season win for the Raptors.

As one of the most recognizable sports organizations in the world, Real Madrid enjoys fan support everywhere they go and Toronto Canada is no exception. It’s been noted in the Canadian press that at times during the contest the Madrid fans sporadically broke into Spanish song. The ‘Spaniards in Toronto’ showed up in force with a group of over 150 supporters to the contest. They even met up with some of the team at their hotel for pictures and autographs before the game.

The speed and constant movement on offense that Real Madrid brings to the court proved to be a major challenge for the hosts, as they sent the Madrid boys to the line for 44 charity tosses. The White’s connected on 29 for 44 (65.9%), which represents a blown opportunity for Madrid. Toronto shot 39 for 89 from inside the arc, while Madrid fired up 28 threes, connecting on 10 (35.7%).

The visiting Italian squad looked much sharper than the Cavaliers did in the open half, but Cleveland made some adjustments at halftime and came out to play in the second set to take the final Euroleague American Tour 2012 contest, 91-85.

Cavalier coach Bryon Scott, who played 13 seasons in the NBA (11 with the LA Lakers) and one in Greece, said of his team’s early performance as “looking like they were stuck in the mud.”

C.J. Miles and Tristan Thompson got the Cavs back on track in the third, shooting seven for eight from the floor as a duo. C.J. “In the second half, we did what we had to do: we took care of the ball and also for us bigs, we started running up and down the court,” explained Thompson. “In camp we’ve been doing a lot of running drills and, for us bigs, we have to look up the floor and that’s what we did in the second half.”

Montepaschi had three in double figures, Bobby Brown lead all scorers with 22 points, Matt Janning had 21, D. Hackett contributed 14 points and Benjamin Eze hauled in 10 rebounds, leading both teams in that stat category.

Samardo Samuels paced the Cavaliers coming off the bench to tally 14 points, seven rebounds and a blocked shot. Donald Sloan added 13 points (also off the bench), Thompson dropped in 12, Miles and Kyrie Irving contributed 10 each.