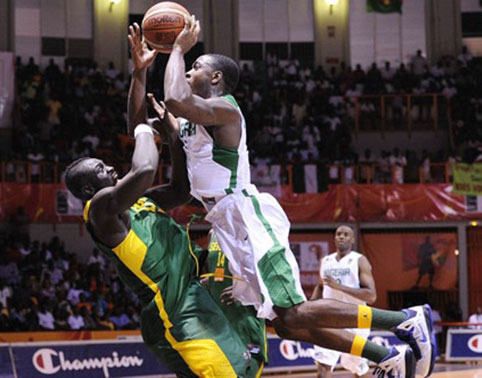 In the biggest upset of the AfroBasket 2013 competition, Senegal put together a solid middle game and outlasted a fourth-quarter comeback by 2012 London Olympics participants Nigeria, 64:63. Also advancing to the semifinals are Cote d’Ivoire with a 71:56 win over Cameroon, Angola after a 95:73 victory over Morocco, and Egypt, who beat Cape Verde 74:73.

The semifinal matchups will be the Ivory Coast against Angola and Egypt against Senegal.

As the first quarter played out, the Nigerian contingent looked to be continuing their scoring run from the night before, when they put up 112 against Central African Republic. By the end of the first 10, they held a 25:16 advantage over Senegal. In the second, Senegal outscored Nigeria 19:12, including a 7:3 run at the end of the half to pull to within a deuce, 37:35, at the break.

The third frame opened with five from Saer Sene to give Senegal the lead, 40:37. Nigeria knotted the score at 40, but then Mamadou Ndoye connected on three triples in a row and closed out the frame with a shot under the basket as the buzzer sounded to push the Senegal lead to five, 54:49 with 10 minutes to play.

Opening the final frame Senegal extended their lead to nine-points with eight minutes to play, only to have the Nigerians take the lead with three minutes to play, 63:62. Senegal scored a minute later to retake the led, 64:63, with two minutes left on the clock. Over the last 2:08 in playing time, neither team could find the net, including Senegal missing four free throws, but Nigeria couldn’t take advantage of the misses and committed three turnovers in the final two and a half minutes. With 25 seconds to play Mouhammad Faye was whistled for traveling, giving the Nigerians the ball back. They worked the clock down to the last second and dumped it in to Ben Uzoh, who missed the game winner in the paint, sending Senegal to the semis, while the Nigerians will now play for 5th place.

Mamadou Ndoye was high-man for Senegal with 13, followed by Faye with 12, and Maleye Ndoye with 10. Al-Farouq Aminu scored 18 for Nigeria, and Ikechukwu Diogu added 14.

Egypt – Cape Verde, 74:73
Egypt continued their improbable run through the playoffs with a 74:73 win over Cape Verde. The win matches Egypt with Senegal in the semifinals.

The first half of the opening period belonged to Cape Verda, who tallied the first 10 of the contest. By the time the quarter was over Cape Verde held a 19:16 lead.

CV extended their lead to seven mid-way in the frame, but Egypt fought back keeping the game close. Mario Ildo Correia hit a shot in the paint with two seconds on the clock to give Cape Verde a four-point lead, 40:36, heading into the break.

Egypt opened the second half with the first four points, knotting the score at 40. At the other end of the frame, the Egyptians outscored CV 11:5, to get up by six, 61:55.

At the six-minute mark Correia knocked down a triple that gave Cape Verde the lead back at 69:68. Egypt took the lead back with points in the paint, then CV took advantage of an Egyptian turnover and scored four straight to get up by three, 73:70. Haytham Khalifa split a pair of free throws for Egypt to cut the lead to two, then Ibrahim El-Gammal dropped a three-ball that would be the game-winner with 44 seconds to play, giving Egypt the lead 74:73. Neither team would find the cords for the rest of the contest, giving Egypt the win and advancement papers to the semis.

Angola – Morocco, 95:73
Angola cruised into the semifinals of the AfroBasket 2013 competition with a 22-point win over Morocco, 95:73. Angola will square off against Cote d’Ivoire.

Angola basically put the contest away in the first quarter with a 26:12 first quarter. Morocco last scored with 4:50 on the clock, only down one 12:11. From there until the end of the quarter, the only scoring down was from Angola as they ran off 15 straight to close out the first 10.

The second was more of the same with Morocco falling further behind with a 24:16 score, to send the clubs into the break with Angola up 50:28.

Angola was able to rest their starters in the second half, and was able to stay even with Morocco 45-all, to wrap up scoring at 95:73, and moving Angola on to the semis.

Olimpio Cipriano led Angola with 16 points, and Leonel Paulo added 14. Abdelhakim Zouita was game-high for Morocco with 25 points, and Youness Idrissi dropped in 17.

Cote d’Ivoire – Cameroon, 71:56
The hosts continued to progress, much to the delight of the local fans, this time they were treated with a big 71:56 win over Cameroon to advance to the semi finals.

Cote d’Ivoire likes to get up early in contests and Wednesday was no different, with the first seven points of the game going to the local club. Cameroon countered with seven of their own, to tie the score at seven. For the rest of the frame the Ivory Coast contingent slowly pulled away from their visitors, with the final points coming from Issife Soumahoro, who connected on a long-ball to put CIV up 10, 24:14.

The second quarter saw Cameroon earning two points back, but keeping the home team up by eight, 40:32, at the break.

Cameroon outscored Cote d’Ivoire 15:10 in the third quarter, but couldn’t grab the lead. Every time they got within a point or two of the lead Cote d’Ivoire would pull away. As the horn sounded at the end of the frame, the hosts held a 50:47 lead.

The final frame was when Cote d’Ivoire would put Cameroon away, outscoring their scrappy guests 21:9 over the final 10, to earn a seat in the semis.