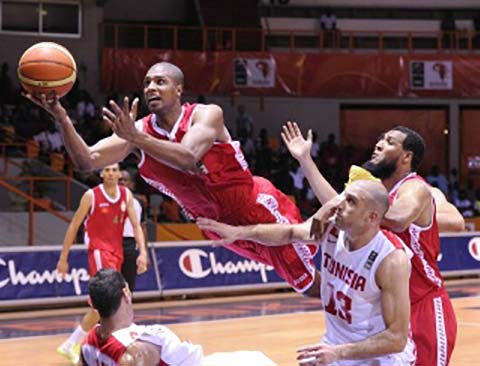 Day 2 of the AfroBasket 2013 saw the defending champions, Tunisia, in one of the most hotly contested battles of the tournament so far when Morocco took them to the wire only to pull off the win in the final seconds. In the other matches of the day Rwanda stopped Burkina Faso, the Republic of Congo pounded Cameroon, and Nigeria picked up a 15-point win over Mali in their first game in Africa since before the 2012 London Olympics.

Macram Ben Romdhane puts in two of his game-high 21 for Tunisia in a 56:54 Group B win over Morocco.

Looking to repeat as AfroBasket champions and earn a spot in the FIBA 2014 World Cup in Spain, Tunisia opened their Group B competition with a match-up with Morocco and snuck out with a hard fought 56:54 win, surviving a late rally with a buzzer-beater.

The Tunisians put up the first six, then let Morocco back in the game with a 6:1 run. For the rest of the first 10 they exchanged baskets, closing out the frame with the score knotted at 16.

Morocco took the lead early in the second, but the clubs swapped that lead for the first half of the quarter. Tunisia ran off seven unanswered over two minutes to build a six-point advantage, 30:24 with two and half to play in the half. Morocco countered with five of their own, but Tunisia nailed down the final seven of the half to take an eight-point lead into the break, 37:29.

With six minutes to play, Mustapha Khalfi knocked down a triple for Morocco and was fouled in the process. After connecting on the single to complete the four-point play, he brought the Moroccans to within four, 51:47. Over the next two minutes the only scoring that would occur would be Morocco splitting two pair of free throws to cut the lead to two. Another minute and a half later, with Tunisia still on a scoring drought, Reda Ali Harras tied the score at 51 with a deuce in the paint. Macram Ben Romdhane came up big for Tunisia in the final two and a half minutes, connecting on a pair in the paint and then dropping the single for the three-point play and a three-point lead, 54:51. Khalfi split a pair of singles to pull back to within one and then Reda Rhalimi hit a paint inside to knot the score at 54 with 54 seconds to play. Khalfi had an opportunity to put Morocco up with 16 seconds to play, but missed a triple, setting up Tunisia to run the clock down and go for the final shot. Ben Romdhane got loose and drove the lane, dropping in the winner with a second to spare, giving Tunisia a big first round win.

Rwanda – Burkina Faso, 80:61
Burkina Faso controlled the first half of their first ever AfroBasket contest, taking a 38:32 advantage into the lockerroom at the break, only to let Rwanda outscore them 48:23 in the second half for an 80:61 win.

The clubs played even through the first quarter and in the second Burkina Faso was able to build margins of six points on separate occasion, including at the buzzer, taking a 38:32 lead into the half.

The contest changed dramatically in the third when Rwanda knocked down the final 12 of the frame, to go from being down five, 47:42, to being up seven, 54:47, with only the final 10 to play.

BF came out swinging to open the final frame, connecting on the first six to cut their gap to one, 54:53. Rwanda then put up 13 unanswered to essentially put the game away with just over four minutes to play, 67:53. By the time the quarter was over, the lead had grown to 19, 80:61, giving Rwanda their first win in what’s going to be a tough group to come out of.

The first quarter saw Cameroon get out to an 11:2 lead by the midway point of the frame to set the tone for the entire contest. Congo was able to put points on the board to keep the game fairly close though, with the first 10 ending at 18:9.

Congo stole two points back in the second, outscoring Cameroon 17:15 and getting to within five with three minutes to play in the half. Cameroon countered with six straight, only to have Congo close out the half with the final four in the paint to send the clubs to their intermission with Cameroon up seven, 33:26.

Cameroon took over in the third, outscoring Congo 21:8, with a final 12:1 run to finish the quarter up 20, 54:34. They then ran off a 12:1 run to get up 31, 65:34, with six minutes to play. The final push to the wire had the clubs exchanging baskets, but Congo had no chance of bridging the gap and gave Cameroon their first win of the AfroBasket 2013 competition.

It took Nigeria a 14-point advantage in the final quarter to pull off a win over a much tougher Mali than was expected. Heading into the final frame with Nigeria only holding a one-point lead, 47:46, the Nigerians ran off the first 14 points of the quarter to put the game away and pick up the first round win, 74:59.

Mali got the early lead, getting up 13:4 before Nigeria countered with nine straight to knot the score at 13. Mali got a deuce in the paint and a triple in the final minute and a half, compared to a single from the Nigerians to end the first frame with Mali up 18:14.

The first eight in the second went to Nigeria, giving them a 22:18 lead before Mali would counter with six straight of their own to retake the lead, 24:22. Nigeria tallied the final seven of the half to put them up 31:27 as the teams took their mid-game break.

Mali outscored Nigeria 19:16 in the third, on a triple with seven seconds to play in the frame, to pull Mali to within one, 47:46, with a frame to play.

The Nigerians, qualifiers for the 2012 London Olympics, came out ready to put some distance between them and Mali by putting up the first 14 of the final 10. By the time Mali scored again, the Nigerian lead had gone from a point to 15 points, 61:46, with six minutes left in the contest. Mali held tough from there out, not letting the lead grow any further, but also not being able to cut the lead down, giving Nigeria the 15-point win in the first round.