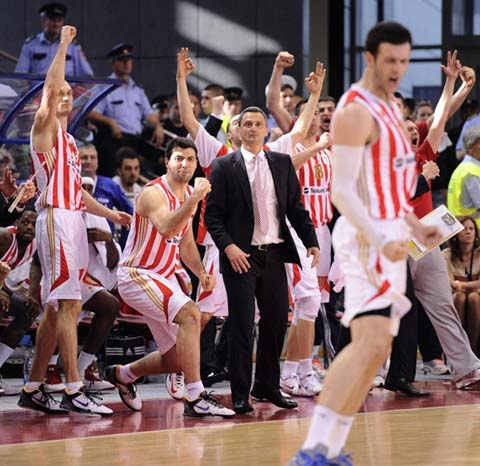 The banner says it all, Red Star will be participating in the Euroleague during the 2013-14 season for the first time in 15 years.

The Adriatic League finals are set for Saturday night and it will be an all-Belgrade final as Crvena zvezda Telecom scored the last eight points of their semifinal game against Radnicki to earn a spot in the finals with a 79:78 win, and Partizan mt:s fought off Igokea, who was down by 13 with under four minutes to play, to grab the other spot in the finals with a 57:63 win on Igokea’s home court.

Red Star – Radnicki, 79:78
In a contest filled with large scoring runs and multiple lead changes, it was Red Star that put together the final swing and got a winning free throw by Vuk Radivojevic with seconds left on the clock to put his club up by one point, 79:78, to qualify for not only the Adriatic League finals, but also to earn a spot in the 2013-14 Euroleague, the first time Red Star will compete in the prestigious league in 15 seasons. Boris Savovic tallied a double/double for Red Star dropping in 18 points while hauling in 11 rebounds on the night.

This will be the first ABA League finals for Crvena zvezda, despite qualifying for the Final Four in five previous seasons (2003-2006, 2009). As has been reported recently, the club has gone through some inner turmoil, with their coach, Vlada Vukoičić, being fired recently after three consecutive losses in the Serbian National League.

Radnicki opened the contest with a solid first quarter, getting up 20:27 after the first 10. Early in the second frame Radnicki had extended their advantage to 13, 22:35, after a 2:10 run that started at the end of the first. The Red and Whites countered with a 16:0 run, including two consecutive triples by Lazic Branko, to get up 38:35 just three minutes later. The clubs exchanged baskets for the rest of the quarter, with Red Star ending the first half up one, 41:40, as they heading for the locker rooms at the half.

Early in the third quarter Red Star went on a 10:2 scoring run to get out on top 56:47, but Radnicki countered immediately with 11 straight of their own, to retake the lead, 56:58, with two minutes left in the quarter. Igor Rakocivic dropped in a jumper at the end of the quarter to give Red Star a 62:60 advantage before the final frame.

The first seven points went on the Red Star side of the board, giving the Red and Whites a nine-point lead at 69:60. Radnicki put everything together for one final push and went on a massive 2:18 run, with seven from Aleksandar Capin, that lasted five minutes through heart of the fourth 10. With just over two minutes to play, Red Star’s Rakocivic split a pair of free throws in what would be the start of their comeback as with just inside a minute to play Rasko Katic would knot the score at 78 with a deuce. After Katic’s basket, Branko Lazic stole a Stefan Bircevic pass, but then made a bad pass to give the ball back to Radnicki, who called a time out to discuss things. On the next possession, Lazic fouled Terrico White to send him to the line for a pair of singles. White missed both charity tosses and Savovic secured the rebound for the Red and White. Stefan Bircevic fouled Radivojevic to send him to the line for a pair, which he hit the second only, but giving Red Star the lead, 79:78, with seconds to play. Radnicki got the ball in quickly and down the court, then into the hands of an open Danilo Mijatovic on the baseline, but his triple attempt came up empty and his mates under the basket couldn’t keep Red Star’s Scot Michael off the rebound and time ran out.

Katic was high-man for Red Star with 22 points and 5 rebounds. Savovic added 18 points and 11 rebounds.

Radnicki got 25 points, 5 rebounds, and 4 assists from Capin, 12 points and 7 rebounds from White, 11 points from Mijatovic, and 10 from Bojan Krstovic.

Joffrey Lauvergne throws one down against Igokea Thursday.

The stage was all set for the trophy presentation on Saturday night… The Adriatic League’s regular season champion, Igokea, was the host of the Final Four. Their opponent, Partizan mt:s, qualified for the Final Four as the No. 4 seed, after defeating Budućnost VOLI for the position on a tiebreaker and having lost four more games in league play than Igokea. It was a perfect set up for Igokea to get on the court, do their jobs and collect the trophy at center court in front of their home fans. The only problem was, someone forgot to give the script to the boys from Partizan mt:s, as they came out swinging from the tip and weren’t going to be denied a return trip to the finals.

Partizan mt:s has won more ABA League titles than anyone, five, has won the ABA League regular season championship more any anyone, four, and other than last season, had been in the final game for seven straight seasons from 2005 though 2011, having lost the first two, then winning five straight titles. This is their league, and they were determined to get back…

In the first quarter Davis Bertrans knocked down consecutive triples to give Partizan an early 8:14 advantage. Marko Brkic hit a triple with just over a minute left in the first 10 to bring Igokea to within two, 15:17, which is were the score ended as neither team could find the bottom of the net for the rest of the frame.

The second quarter was very low scoring and of what was dropped in, half of it came from the free throw line. The hosts outscored Partisan 10:6 in the second, to take a 25:23 advantage into the dressing rooms at the intermission.

In the third, Igokea built a six-point lead, 36:30, mid-way through the frame, getting four of Corsley Edwards game-high 19 points in a mini scoring run. Partizan countered with a Bogdan Bogdanovic triple to knot the score at 40, then Joffrey Lauvergne split a pair of singles to close out scoring in the third quarter at 40:41.

Bertans opened scoring in the final frame by knocking down a jumper to give the guests a three-point advantage, 40:43. Mid-way through the frame and up by four, 45:49, Partizan got three consecutive three-balls, one from Vladimar Lucic and two from Dragan Milosavljevic, to break the contest open with a 13-point advantage, 45:58, with just over four minutes to play. Igokea get to within nine on a Clifford Hammonds three-point play, 52:61, but Bertans dropped in a pair of three throws with just under a minute to play to extend the lead back to 11. Brkic hit another triple and and Nebojsa Joksimovic connected on a jumper to give Igokea the last five points of the game and pull within six, but they ran out of time and will have to watch the finals from the stands as Partizan will face Red Star Saturday night for the Adriatic League championship.

Bertans was team-high with 15 points and 6 rebounds for Partizan. Lauvergne added 12 points and 4 rebounds, and Lucic contributed 11.

Edwards ended the game with a double/double, 19 points and 11 rebounds for Igokea. Hammonds added 15 points and 6 rebounds.