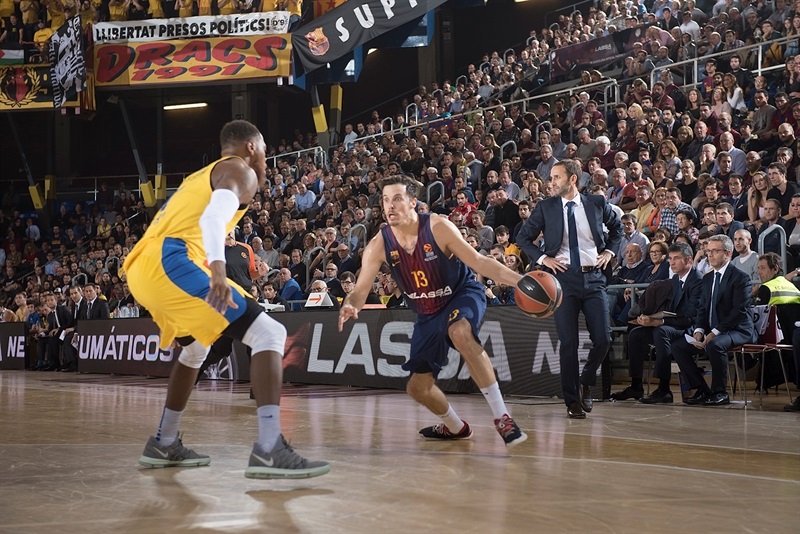 All eyes were on the Turkish Airlines EuroLeague on Thursday as Round 9 of the regular season got underway. There were four games to open the round, and as usual, the final four contests of the week will play out on Friday.

It was a good day to be at home unless you are from Crvena Zvezda. The Serbian club was the only to lose at home on Thursday, falling to Baskonia. Elsewhere, Zalgiris Kaunas outlasted Efes in Lithuania, while Brose Bamberg took out Valencia by a single point. Finally, Barcelona crushed Tel Aviv in Spain.

Zalgiris’ good form this season continued on Thursday in the Turkish Airlines EuroLeague. This has been one of the best starts to a campaign for the club in recent memory and the Kaunas giant holds a winning 5-4 record. Efes on the other hand is floundering at the bottom of the standings (2-7). In this game, Zalgiris stayed a step ahead of the Turkish club for most of the contest, extending a five-point lead through thirty minutes during the final act.

Brose Bamberg is building on last season’s EuroLeague campaign to find its feet in the competition. The German champs moved to a winning 5-4 record at the expense of Spanish champions Valencia, who slip to 3-6. The visitors will see this as a missed opportunity as they led 41-47 through the long break and extended to 52-66 after the third frame. With a 14-point lead, the game looked done, but Bamberg rallied with a wonderful 31-16 charge in the fourth. The comeback was complete when Ricky Hickman won the game for the hosts from the charity strip.

Hickman finished his night with the game-winning buckets and 26 points for Brose Bamberg.

Erick Green continued his good scoring form with 17 points in the losing effort.

Both these former champs are hunting to regain former glories after awful season’s last year. Tel Aviv has largely done better this season, while Barcelona has been inconsistent. The Catalan giant showed when it is turned on it can beat anyone with a stunning performance here. Tel Aviv is still rising high on 5-4, while Barca improves to 4-5. The hosts controlled the game, scoring 22 points in the opening three quarters to lead 66-44 through thirty minutes. The fourth act proved to be a formality for the Spanish club.

Petteri Koponen secured 20 points in the win, followed by Rakim Sanders with 18 points.

Crvena Zvezda is already having a EuroLeague season to forget and things got worse for the ABA League champs as they fell at home to Baskonia. The loss puts the club bottom on 2-7, which Baskonia is starting to put things together and moved to 4-5. The Spanish club is always capable of heavy scoring and a 47-point first half to lead by 9 points. The hosts made a game of it by clinching the third period 19-17 and then drove close with a winning fourth quarter. Baskonia ultimately weathered the storm and collected the win.