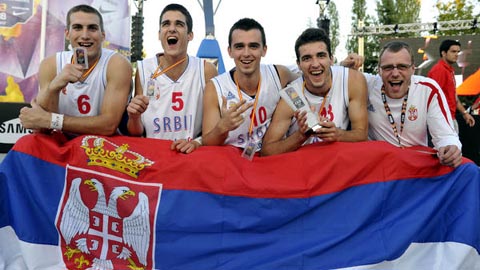 There was an air of deja vu as the FIBA 3×3 U18 World Championships, presented by Nike, came to a close on Sunday in Alcobendas, Spain.

Serbia won the Boys tournament, the USA ended Spain’s reign in the Girls event and France came out on top in the Mixed competition.

This was very similar to what transpired in Athens, Greece at last month’s FIBA 3×3 World Championships when the Serbians claimed the Men’s gold medal, the Americans prevailed in the Women’s Final and France made history in winning the first-ever FIBA Mixed competition.

After the first two days of competition were played in the Amaya Valdemoro Pavilion because of bad weather, the sun finally shone bright and allowed for the teams to take to the courts in the José Caballero sports centre. The great weather was only one of the reasons why the last day of the FIBA 3×3 U18 World Championships finished in spectacular fashion.

The tournament could not have finished with a better climax than what was offered in the Boys Final. Serbia led 16-12, but the USA came back to tie the game at 19 all on Rondae Hollis-Jefferson’s lay-up as time ran out in regulation. The extra session got off to a great start with Hollis-Jefferson driving the lane for a thundering left-hand dunk that made it 20-19.
However, Serbia had the last word as Mihaljo Andric launched a shot from way beyond the arc that hit off the square on the backboard and the ball then rolled in for a winning score of 21-20.
In 3×3 rules, the game finishes when one of the teams scores two points in the overtime.

The Girls Final meanwhile saw the USA beat defending champions Spain 21-13. The Americans were in the ascendency but couldn’t quite pull away as the hosts got within 16-11 on Ariadna Pujol’s lay-up. However, it was pretty much all USA thereafter as Kaela Davis – who played in the inaugural FIBA 3×3 U19 World Championships in Rimini, Italy in 2011 – caught fire to scoring inside and then hitting a clutch pair of shots from beyond the arc to put the game out of reach.

The first-ever Mixed Tournament Final pitted European neighbours France and Switzerland. With Damien Inglis leading by example, the France prevailed 21-12 to become the first champions of the new and exciting event. Inglis almost scored at will inside, throwing down some vicious dunks, while team-mate Charly Pontens overcame a slow start to find his rhythm and score key baskets.
The Swiss fell behind 14-8 when Pontens converted a shot and made the free-throw. Through some spectacular drives by Cyril Baechler, Switzerland got within 15-10 but France just had too much offensive firepower down the stretch.

Sunday also saw the culmination of the individual competitions and the excitement was at its peak for the much-anticipated Nike Dunk Contest. The fans certainly weren’t let down as Terry Thomas of Germany and Estonia’s Martin Jurtom put on a show, with the former coming out on top. Thomas had several impressive dunks. One had him jump over a crouched team-mate and pass the ball between his legs before throwing it down. He also jumped from just inside the free-throw line and then replicated a dunk he did in the qualifying round, when he skied above an advertising board and windmilled the ball through the hoop. Jurtom showed off his originality with a baseline reverse two-handed dunk, before jumping over two team-mates for a tomahawk slam. Perhaps his finest effort was the one that saw him switch the ball from his right hand to his left hand in mid-air and finish with a powerful windmill jam. The USA’s Hollis-Jefferson and Baechler of Switzerland finished in a tie for third.

Hollis-Jefferson had the crowd going wild in the first of the two-round Final as he caught the ball off a lob thrown by USA Girls team member Davis from the stands and threw it down ferociously with the left hand. He later took another pass by Davis and dunked over a team-mate standing in front of the basket.

In the Final of the Samsung Shootout, Moses Tree-Vanne of Belize got the better of his three opponents to take home a latest generation Samsung digital camera. Tree-Vanne had the hot hand as he scored 8 points in the Final, twice as much as the 4 managed by second-place Monika Naczk from Poland. Lithuania’s Justinas Gecas finished third with 3 points and Elisa Penna of Italy rounded out the field.

Finally, Germany were the winners of the inaugural 2 Ball Contest. The team consisting of Robert Zinn and Terry Thomas scored 5 points in 49 seconds. It was enough to deny the home favourites of Borja Mendia and Ariadna Pujol who scored 4 points in 47 seconds.