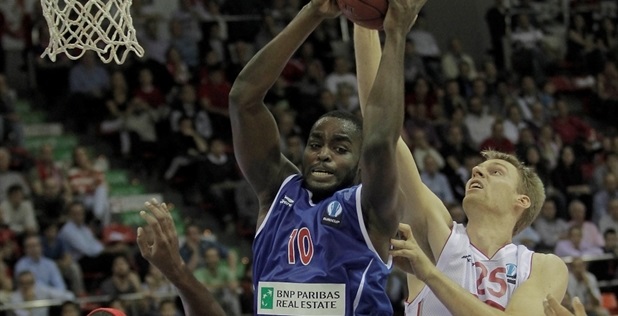 Round 2 of the 2014/2015 Eurocup season got underway on Tuesday evening with two games tipping off another busy week of action in the competition. It was a night when both host teams defended their court and came away with victories, with Nymburk and Paris Levallois celebrating success.

Paris Levallois vs. Grissin Bon Reggio Emilia, 88-76
French club Paris Levallois defeated Italian visitors Emilia at home to register its first win of the 2014/2015 Eurocup campaign. After the game both clubs were left with 1-1 records at this early point of the season. The hosts pulled 47 rebounds off the board through the game, including 35 in defence to prevent second chance opportunities for Reggio Emilia. The winners also shot 58.3% from downtown, nailing 14 triples from 24 attempts.

The visitors started the game brightly and opened a 0-5 lead early in proceedings, moving to 6-10 after 5 minutes. Paris soon got into the game and found baskets easier to come by, taking its first lead to move 13-10 ahead. The remainder of the quarter was close as Emilia kept pace with the home team, although the hosts led 20-19 after 10 minutes.

The teams traded at the start of the second quarter before Reggio Emilia opened a five point lead with consecutive scores from the plays (25-30). Paris responded well and sent home the next 11 points without reply and kept the momentum to move 42-34 in front. The away team responded with two scores to cut the deficit to 42-38 at halftime.

Paris opened the second half in style, sinking twice from beyond the arc to make it a double digit game, the scoreboard reading 48-38. Emilia responded with their own triples soon after, but Paris still held a solid 53-46 lead. From there the hosts went on another run, outscoring the Italians 9-2 to lead 62-48 and they used that to build a formidable 71-54 lead through 30 minutes.

Paris had put together an 18-8 streak at the end of the third, but Emilia scored the first 7 points of the final stanza to at least make it interesting. However, the home team looked in control and through the period eased out their opponents to win the game.

CEZ Nymburk vs. EWE Baskets Oldenburg, 77-71
Czech powerhouse CEZ Nymburk handed Oldenburg its second consecutive 2014/2015 Eurocup defeat while also recording its first win of the competition. The hosts were slow to get into the game, but after a shaky first quarter outpaced EWE Baskets through the remaining three stanzas.

Nymburk scored from the first play of the game, but the German visitors had the early groove and scored five on the bounce. Oldenburg had soon opened a 4-14 lead and maintained that double digit advantage for the remainder of the opening period, winning the frame 10-20.

Things looked dire for the hosts at the start of the second as the away team scored 7 points to make it a 17 point game. After a timeout, Nymburk started to work harder and organize better at both ends; it was enough for the team to steal the second quarter 22-15. The home team had closed the deficit and at the long break the score read 32-35.

The teams went bucket for bucket at the start of the third quarter, but a triple play from Oldenburg drew them to within one point (39-40). Once again the lead switched back and forth, before Nymburk hit consecutive shots from downtown to open the score to 53-48. The hosts held the momentum for the remainder of the quarter to lead 58-53 after three periods on the hardwood.

A tight and sometimes tense fourth frame saw the teams once again go toe to toe on the scoreboard. However, driven by the home crowd, Nymburk snatched the quarter by a single point and recorded the win.

Rickey Paulding notched a game high 18 points in the losing effort, while Adam Chubb scored 14 points and took 11 off the glass for the only double-double of the game.