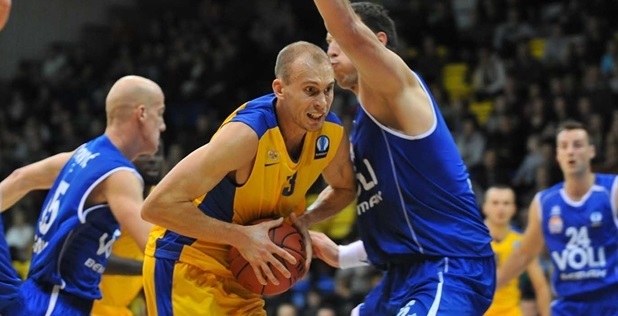 The remainder of Round 1 of the 2014/2015 Eurocup season wrapped on Wednesday with sixteen games around the continent following the two that were played on Tuesday.

Group A
CAI Zaragoza hung on to see off Paris-Levallois 77-76 as the French team visited Spain and almost came away with the win. The hosts needed to hold on through a late Paris rally, but Zaragoza took the win thanks to two strong periods through the middle quarters. A generous attack handed out 25 assists for the winning team, while Marcus Landry led the Spanish team with 15 points. Blake Schilb looked the best player on the hardwood for Paris as he took 17 points, 5 boards, and 5 assists through the game.

Italian outfit Grissin Bon Reggio Emila outlasted German club Brose Basket Bamberg at home to kick off its Eurocup campaign in style, taking the game 70-67. There was just one point in the game after 30 minutes, with the hosts trailing 49-50. However, a big final stanza saw Reggio Emila take the frame 21-17 to win the contest. The Italians shot 85.2% from the charity strip, shooting 23 of their 27 free throw attempts.

Telekom Baskets Bonn fell at home to French visitors Strasbourg, ending the game in Germany trailing 83-86. Despite losing by three points at halftime (16-21, 26-24), the hosts actually looked good at the final split and went into the fourth quarter protecting a six point 64-58 lead. However, Strasbourg, paced by the 18 points and 5 assists from Louis Campbell, managed to turn the game around to claim the win.

Group B
It was a solid opening game for Dijon Bourgogne as the French team downed Oostende 72-63 at home. The two teams fought the remaining Group B game during Round 1 as the other four clubs had tipped off the 2014/2015 Eurocup on Tuesday. Oostende started the game in better touch and paced to a 1 point lead after 10 minutes (16-17), but by halftime the hosts turned it around for a 10 point lead. Dijon maintained their advantage and cruised through the second half to victory.

Group C
A commanding away win came the way of Virtus Roma as they travelled to Belgium and defeated Spirou Charleroi 59-88. The Italians got off to a great start and through the first half opened a substantial 27-51 lead at the long break. The lead was extended through the third quarter and the visitors moved comfortably down the stretch, thanks in part to 24 personal fouls from the Belgians in Q4.

EWE Baskets Oldenburg could not keep pace with Sevilla as the Spanish team travelled to Germany and left with a 77-85 win. A big first frame gave Sevilla a handy 19-27 lead and the away team extended to 39-48 at the midway point. The hosts responded by snatching the third frame 18-17, but Oldenburg could not find a way through the Spaniards, tying the final stanza 20 apiece. Alex Urtasun paced the winning effort with 16 points, while Nemanja Aleksandrov collected a game high 22 points for the downed German club.

Sluc Nancy welcomed CEZ Nymburk to France and beat the Czech powerhouse 78-76 at the start of the 2014/2015 Eurocup. The teams went bucket for bucket through the first quarter and tied the frame 20-20, before Nancy found another gear to win the second period 20-11 (40-31). In the third quarter the visitors struck back with a solid 20-26 streak through the high scoring stint to cut the deficit to 60-56 after 30 minutes. Nymburk also won the last quarter, but not by enough to reel in the hosts.

Group D
Szolnoki Olajbanyasz surprised Russian club Zenit Saint Petersburg as the Hungarian outfit used home court advantage to carve out a 96-94 win. It was a high scoring encounter that started with the teams duking it out to a 22-21 first quarter score. The hosts extended their lead with a 25-23 run in the second to hold a 47-44 halftime cushion. Zenit fought back to take the third quarter 16-23 to lead 63-67 with just one quarter remaining. Szolnoki put on a huge fourth quarter as the team poured in 33 points to take an important opening win in Group D.

A close match in Turkey saw home club Besiktas edged out by Slovenian club Union Olimpija Ljubljana, with the final score reading 68-70. The visitors impressed through the first half, claiming the opening frame 12-19 and the second period 12-14 to lead 24-33 at the long break. Besiktas continued to struggle in the third stanza as the Slovenian club extended further to lead 36-52 after 30 minutes. The Turkish hosts exploded in the fourth quarter to win the frame 32-18, but while they made the visitors sweat they could not snatch the win.

Khimky Moscow Region clashed with Latvian visitors VEF Riga during Round 1 of the 2014/2015 Eurocup season and came away with a crushing 94-65 victory. The Russian club never looked in trouble, demolishing the Latvian contingent, especially in the middle quarters with 26-10 and 24-13 runs. Tyrese Rice is often the spark for the Moscow club and so it proved again as he notched 16 points in the win, while also adding 5 dimes. Gerald Robinson stood out for Riga with 21 points, 6 boards, and 3 assists.

Group E
Lietuvos Rytas Vilnius out muscled Partizan NIS Belgrade 92-65 at home in a confidence boosting first game for the hosts. The Lithuanian team built on strong free throw play, hitting 100% of its 16 attempts from the charity strip. A 30-21 first quarter set the tone for the win, while the command was cemented with a 17-8 second period for Vilnius. Serbian club Partizan recovered to win the third quarter 23-25, but the hosts went again in the fourth to win the stanza 22-11 and complete a crushing victory over their opponents.

A tight encounter between Banvit BK and Hapoel Jerusalem in Turkey saw the hosts take an 80-76 victory over their Israeli rivals. Banvit had to work hard for the win though as the visitors won the first quarter comfortably (14-19) before holding onto a 33-35 lead heading into the locker room. The hosts turned the tables in the second half and outpaced Jerusalem 47-41 in the closing 20 minutes to seal the game.

Romanian champion Ploiesti visited Russia to defeat Krasny Oktyabr Volgograd 75-81 to register its first win of the Eurocup campaign. The visitors outpaced the Russian team through the first quarter to lead 20-23 after 10 minutes on the hardwood. A strong second quarter from Ploiesti opened the gap, with the halftime scoreboard reading 36-43 in favour of the Romanians. The victory was all but sealed when the away team won Q3 17-19 to lead by 9 points after half hour (53-62). The home crowd would have hoped for a comeback, but despite the hosts winning the last frame 22-19, it never came.

Group F
Greek team PAOK Thessaloniki needed two overtime periods to see off Karsiyaka SK Izmir in Turkey, finally prevailing 81-87. The Greek party managed to snatch the first quarter 18-19, but Izmir responded well in Q2 with a 12-7 run that put the halftime score at 30-26. The hosts extended their advantage in the third, but only by a single point; winning the frame 19-18 to lead 49-44 after 30 minutes. PAOK fought back in the fourth quarter to tie the game after regulation, plunging the contest into overtime. During the first extra stint the teams traded buckets to tie 7-7, but in the second added frame the visitors took the game with a 7-14 run.

Stelmet Zielona Gora fell to Lokomotiv Kuban Krasnodar as the Russian visitors turned it on to beat their Polish hosts 78-97. Lokomotiv is fresh off beating CSKA Moscow and looks in good form, cruising through the first quarter 14-31 and impressing through a 15-20 second frame (29-51 at halftime). The visitors continued to pile on the pressure and won the third quarter 24-25, but Gora was improving and won the fourth 25-21. It was not enough to stop a very comfortable Lokomotiv win.

Ventspils was returning to the competition for the first time in four years and overcame Buducnost VOLI Podgorica 82-75 at home. The hosts outlasted Podgorica through an exciting first quarter, leading 24-21 at the first split. In the second quarter Ventspils found another gear and won the stanza 26-13 to open a commanding 50-34 gap at the halftime buzzer. The victory was all but confirmed as the home team put together a 20-18 third to lead 70-52 at the last interval. Podgorica restored some pride with a big 12-23 closing 10 minutes, but the game was already gone.