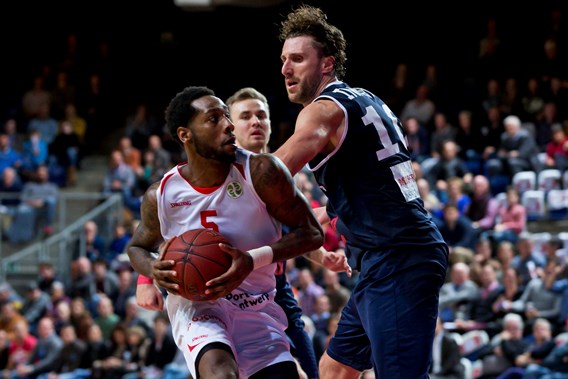 Round 5 of the 2014/2015 Eurochallenge is up and running after a busy schedule of games ushered in the fifth week of competition on Wednesday. There were twelve games played through Europe on the night, while more teams booked their place in the Last 16 when others slipped out of contention for the next phase.

Group A
Enel Basket Brindisi put a foot in the Last 16 of the 2014/2015 Eurochallenge by defeating Södertälje Kings 52-96 on the road. The Italian club now tops Group A at 4-1, while the Kings sit last with a 0-5 win and are now out of the running. Enel Brindisi stormed into a 12-20 lead after 10 minutes, then went big to win the second 14-31 to make it comfortable through halftime (26-51). In the third quarter the visitors put it beyond doubt with a stunning 10-28 charge, and then cruised in the final act by edging Q4 16-17.

SPM Shoeters Den Bosch kept itself in contention for the next round by outgunning Ratiopharm Ulm 87-76. The win pushed the Dutch club above their German guests, but both clubs have a 3-2 record in a share of second place. Shoeters built their win on a blockbuster first frame that they won 28-12, but Ratiopharm fought back to snatch the second stanza 11-15. At the long break the score was 39-27, but Ratiopharm slashed the gap further by pacing 25-27 through a high scoring third (64-54). The hosts managed to hold their double digit lead in the fourth despite Ulm pressure.

Group B
Bulgarian club Lukoil Academic Sofia slipped to a dramatic 73-75 home loss at the hands of Tartu Rock. The victory sent Tartu through to the 2014/2015 Eurochallenge Last 16, while Lukoil now leaves the competition at the group stage. A tight and tense first quarter saw the Sofia outfit take an 18-17 lead knowing victory was imperative. The hosts added another point deficit toward a win in the second quarter with a 16-15 run that made it 34-32 at halftime. In the third Tartu Rock cut the deficit in half by winning the third frame 20-21 (54-53), before the visitors snatched the fourth 19-22 to sneak the crucial win.

Energia TG-JIU Rovinari lives to fight another week after edging past Kormend 73-72 at home in one of the closest games of Tuesday evening. Rovinari took possession of second place in Group B with a 3-2 record, but Kormend can still qualify from third and 2-3. Energia took a slender one point lead into the second quarter after nabbing the first ten minutes 19-18. In the second act Kormend took control of the hardwood and with a 15-22 run that made it 34-40 at the midway point. The hosts made three points up in the third frame before using a 21-17 streak in the fourth to break Kormend hearts at the death.

Group C
The Fraport Skyliners moved closer to the next phase of the competition by taking out Bakken Bears comfortably on the road, with the final score reading 61-94. The Bears have been on the receiving end of some beatings this season and the Danish club are already out of the competition at 0-5. The German guests drained 30 points in the first stint to lead 19-30 at the first buzzer, while a 14-23 second frame made it comfortable through the long break, the scoreboard reading 35-53. The visitors made their advantage count in the second half, winning the third 11-17 and the fourth 17-24.

Group D
Avtodor Saratov stayed unblemished in Group D, moving to 5-0 after defeating CSM Oradea 92-73 at home. The Russian dominated leaving the away team with a mountain to climb from the foot of the table without a victory (0-5). Nothing separated the teams in Q1 as they locked the scoreboard at 20 apiece at the first split. In the second period Avtodor added 20 points again, while Oradea only managed 12 points to give the Saratov club the halftime advantage (40-32). The Russians made it count against a renewed effort from the visitors by winning the third frame 28-24 and the fourth 24-17.

Group E
A Group E thriller saw Mons-Hainaut outlast Kataja Basket 83-85 away from home to move to 4-1 in sole possession of second place in Group E. As for Kataja, they are already out of the running in last place with a 0-5 showing. The teams traded buckets through the first stanza as the score tied at 19-19 at the first interval. In the second term Mons-Hainaut edged clear with a 20-24 winning quarter to make it 39-43 heading into the locker room. In the third act the visitors extended by pouring in 28 points while Kataja only managed 21, making it 60-71 through thirty minutes. The hosts erupted in the final quarter with a 23-14 run, but Mons-Hainaut had too much in the bank and rode to the win.

Group F
Turkish club Trabzaonspor maintained its vice like grip on Group F, staying undefeated with a big 91-72 win over Cluj-Napoca. The victory pushed the club to 5-0, while the Cluj contingent props up the group, winless at 0-5. The hosts streamed in 28 points in Q1 and kept Cluj-Napoca to just 12, making it an emphatic start to the contest. In the second quart the Romanians found a scoring vein and plundered it for 25 points to cut the score to 47-37 at halftime. The double digit lead was cut in the third quarter as Cluj won out 17-15, but ultimately Trabzonspor had more gears and in the fourth eased to the win with a 27-20 run.

Group G
Needing a win to reach the Last 16, Le Mans blitzed KTP-Basket 62-96 on the road to get the job done without a doubt. KTP is on the edge, but will fight on from 1-4 in the group. The French club looked hot from the start, winning the first quarter 17-27 and then extending 15-20 through the second to make it 32-47 at the midway buzzer. The huge lead became a procession in the third as Le Mans won the period 16-22 before putting KTP to the sword in the fourth act with a 14-27 blitz.

Antwerp Giants used home court advantage to put ten points on Bonprix Biella, romping to a 92-82 home win. The Belgian team moved to 2-3 in third place in the process, one spot behind the Italians in second (3-2). The first quarter was high octane as both teams troubled the basket consistently, but it was Biella with the lead at ten minutes (24-27). The visitors pushed on in the second to win it 20-21, enough for a 44-48 lead at the midway stage. The Giants started tightening in defence while staying strong in attack and the result was a 26-21 winning third stanza. That run set up a game winning fourth for the Antwerp team.

Group H
BC Siauliai moved into second place in Group H (3-2) and now has an eye on the Last 16 after defeating Tsmoki-Minsk 83-80 with a late show at home. Minsk is now out of the competition, occupying last place with a 1-4 record. The Belarus visitors set the tone by pacing to a 17-25 lead after the first quarter and looked in control. In the second the hosts responded with a massive 30-15 run to give them control of the board through halftime (47-40). Nothing separated the teams as they tied the third 20-20, and Siauliai had to weather a turbulent Minsk storm in the fourth to hold on for the win.