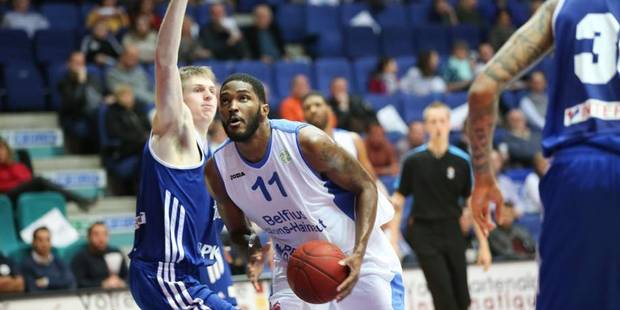 Week two of the 2014/2015 Eurochallenge got underway on Tuesday evening with ten games taking place around the continent. As is usually the case, the Basketball was tight and exciting, and as we have become used to in this competition there were plenty of close ties. For example, two games went to overtime, while another was decided by a single point.

Group B
Kormend overcame Energia Targu Jiu by a single point at home 77-76 in what was a topsy-turvy encounter. The hosts set a rapid pace by winning the first quarter 27-14. Energia started to hit into the deficit with a winning 24-27 second frame, while 13-20 run in the third drew the visitors closer through three quarters (64-61). The away team had the momentum and led 71-76 with the clock ticking, but Kormend fought back and Walter Lemon scored with 20 seconds left to seal the game.

Tartu Rock got off the mark in the 2014/2015 Eurochallenge with a comfortable 71-59 home success over Lukoil Academic Sofia. A narrow opening act saw Tartu come away with a slender 15-13 lead, although they kept scoring in the second and held Lukoil to just 9 points, enough for a 31-22 lead. The hosts all but wrapped up victory in the third quarter with a 20-10 run and then rode a losing 20-27 fourth frame to secure the victory.

Group C
Okapi Aalstar smashed Boras Basket 67-91 on the road in the only Group C game on Tuesday. The visitors led for much of the game, repeating their destruction of the Bakken Bears in Week one. Okapi stormed to an early 16-22 lead after 10 minutes on the hardwood, before extending with a 13-16 run through Q2, putting the board on 29-38 at halftime. A big 16-25 streak in the third act gave the away team a 17 point lead at the last split and hosts Boras failed to get into the game in the fourth as Okapi romped to victory.

Group D
A high scoring encounter saw Tofas fall at home 102-106 to Astana, but the game needed overtime to be decided. The hosts looked in command at the first buzzer, leading the game 25-13. Astana cut the lead a little during the second quarter to make it 47-39 at the long break. A close fought third period saw Tofas consolidate with a 24-23 run, enough for a 71-62 lead after 30 minutes. Astana went hot with a 22-31 run in the fourth to tie the game after regulation and used the built momentum in the extra period to win a hugely exciting game.

Avtodor put a hundred points on the board away from home by gunning down CSM Oradea 74-101. Courtney Fortson continued to be a driving force for Avtodor and the visitors signalled their intentions early with a 16-25 winning first quarter. An even better second period followed as Avtodor won the stint 14-24 to lead big at halftime, the scoreboard reading 30-49. Another big scoring effort followed as Oradea’s 21 third quarter points were bettered by 27 from the visitors. Avtodor eased down the stretch in the fourth to win the game at a canter.

Group E
JSF Nanterre made it two wins from two in the 2014/2015 Eurochallenge by downing Benfica 80-68 in France. A big first quarter set the tone for Nanterre as they won the opening ten 27-15. Benfica spent the next two quarters getting back into the game, winning the second 17-19 and the third 18-21 to make it 62-55. Nanterre had weathered the storm and won the fourth quarter to make it a leisurely stroll to victory.

Belfius Mons-Hainaut stayed untouched in the competition so far by handing a second straight defeat to Kataja Basket courtesy of a 71-62 home win. It was hard to separate the teams through the first quarter, but Mons-Hainaut eventually broke the bucket trading to lead 19-18. The hosts added another point to the cause through a 20-19 second, making it 39-37 at the long break. A 15-11 run extended the home team further in the third quarter, but after half hour there was still only six points in it (54-48). However, another winning frame wrapped a solid performance from Belfius Mons-Hainaut.

Group F
The second overtime encounter of the night saw Trabzonspor Medical Park defeat U-Banca Transilvania Cluj-Napoca 80-81 on the road. The game was tight from the opening tip off and the first quarter ended locked at 13-13. Cluj took advantage in the second quarter with a 27-18 run and still held the lead after thirty minutes despite a 13-19 rally from Trabzonspor in the third (53-50). The Turkish visitors took the initiative in Q4 to tie proceedings at regulation, before they outpaced the hosts 10-11 in the added overtime period.

Magnofit Güssing Knights won its first ever road game in European competition with a 70-80 success over Atomerömü. The Knights made the early pressing and delivered a winning 19-22 first quarter and extended through the second stanza to lead 31-37 at the midway buzzer. A huge third quarter saw the visitors pour in 27 points while Atomerömü offered 16, enough for a commanding 47-64 lead heading into the final act. The home team rallied in the final stint but still fell well short of the winning total.

Group G
Le Mans stayed unbeaten at this early stage with a comfortable 71-52 home win over KTP-Basket. The French club opened the game well and at the first rest they led 19-13. KTP hit back in the second frame, but only won the period 17-18. Le Mans used a 36-31 halftime lead as a spring board to a 17-11 winning third and an emphatic 18-10 fourth, making the second half a breeze.