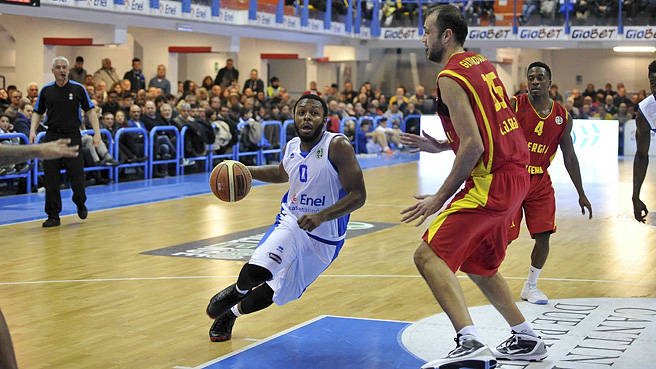 Group I
CS Energia Rovinari Targu Jiu had already qualified and ensured first place in Group I heading into this contest, but the Romanian club still had a big part to play. The club hosted Enel Brindisi knowing it could scupper the Italian teams’ own quarter final ambitions. As it was, the visitors celebrated a 67-78 win to qualify. The group was wide open in the fight for second place, and it was looking as though Enel Brindisi would miss out as they trailed 34-32 at halftime. A massive second half ensured the club would continue its 2014/2015 Eurochallenge journey this year.

BC Astana had done its job earlier in the evening and defeated Okapi Aalstar 77-73 in a close encounter. The Khazakstan outfit knew that victory for Enel would mean elimination and so it proved even though both clubs finished on 3-2 records. The hosts controlled much of the game but had to contend with a late flurry from the Belgian visitors to ensure the victory. Niklas Canley-Medley led the winners with 21 points and 9 rebounds, while Pat Calathes doubled up with 12 points and 10 boards.

Group J
JSF Nanterre punched its ticket to the next round with a big 62-82 road win over Magnofit Güssing Knights, a victory that also ensured top spot in Group K. It was a tight game aside from a decisive second quarter where the French visitors drained 28 points to just 10 from the Knights. Only five players from the hosts managed to score (including a game high 21 points from Aleksandar Georgiev), while every player in the Nanterre line up contributed to the scoreboard.

Le Mans edged USAK Sportiff on the road in Turkey to book a place in the quarter finals, but it should have been so much easier for the French club. The visitors led by as much as 16 points in the fourth quarter, but USAK roared back into contention. It always seemed like a step to far for the hosts though, especially as they needed a 22 point win to reach the Q/F stage. Le Mans’ victory made Group J an all-French affair heading into the next round.

Group K
Group K had already been decided in terms of who would qualify, but there was still a pretty big game taking place in Russia. Avtodor Saratov hosted German club Fraport Skyliners in a contest that would decide which of the clubs would top the group. As it turned out, with nothing to really lose, the teams put together a fantastic game and arguably the match of the round. In the end, after two overtime periods the Skyliners prevailed 103-112. The teams locked 77 apiece through regulation and after a 10-10 overtime could still not be separated (87-87). However, the German contingent had the legs and won the second OT 7-16 to claim top spot. Quantez Robertson led the scoring with 30 points, while there were three double-double performances. Justin Cobbs offered 16 points and 12 assists for the winners, while Sean Armand doubled up with 18 points and 11 rebounds for Fraport. 20 points and 16 boards from Kyrylo Fesenko for Saratov ultimately proved to be in vain.

A dead rubber game between Tartu Rock and SPM Shoeters Den Bosch saw the hosts win 71-64. Both teams had already been eliminated from the 2014/2015 Eurochallenge, but Tartu Rock ended on a high in front of its own fans in Estonia. Janar Talts led three Tartu Rock players in double figures with 21 points, while only a single Den Bosch player hit double numbers on the board, Ralf de Pagter with 10 points.

Group L
Trabzonspor Medical Park was already guaranteed first place in Group L and qualified back in Round 4, but the Turkish club bounced back from its first Eurochallenge loss last time out with a 76-68 win over Belfius Mons-Hainaut. The hosts have lost just one game in the whole competition this season and will be a contender now we enter the knockout stages. Here, Trabzonspor traded with Mons-Hainaut for much of the game, but had too much for the Belgian visitors in the end, despite a losing fourth frame.

BC Enisey lost to the Antwerp Giants 85-86 at home but still managed to progress to the next stage. Antwerp almost fulfilled its ambitions, but ultimately needed to win by 16 points to reach the quarter finals, and as such it was Enisey celebrating at the buzzer. DeAndre Kane was in blistering form for the winners with a triple double that will surely land him player of the week. Kane offered 23 points, 11 rebounds, and 10 assists for the Giants.