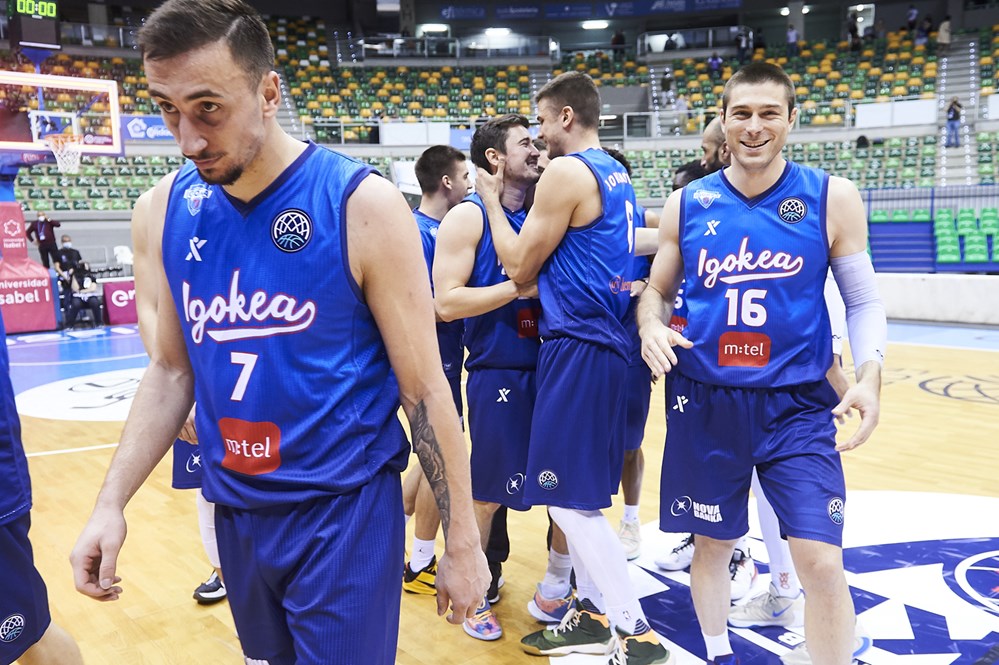 Upsets by Nymburk and Igokea in FIBA Championsleague Play-Offs

The Czech side, who had completed a similar comeback in the previous game against Dinamo Sassari, when they came back from a 14-point deficit, have now extended their undefeated run in Group L to three games, while the German team slide to 1-3 in the standings.

Bamberg’s steely defense at the start of the night stifled Nymburk, who were playing without point guard Retin Obasohan, and the German team rode the hot hand of Chase Fieler to race to a 36-18 lead halfway through the second quarter.

Nymburk was trailing 58-48 with 2:46 remaining to the end of the third frame when Nymburk decided to turn the screws on defense and started to climb their way back.

Palyza, who scored 19 points of his points in the fourth stanza, drilled a triple to put the Czech side ahead 59-58, and Hayden Dalton followed up with a three-pointer of his own to cap off Nymburk’s 14-0 run.

Bamberg managed to react, but when they reduced the deficit to 81-77 right before the three-minute mark, Omar Prewitt and Palyza scored with layups on back-to-back possessions, Nymburk secured the win without any drama.

Palyza collected his 26 points on 6 of 11 three-point shooting, and Jerrick Harding chipped in with 19 points and 6 assists, while Fieler finished with 19 points in a losing effort.

Casademont Zaragoza wreaked havoc on the open floor to recover from an 11-point early deficit and outgun Dinamo Sassari 105-88 at home in their best offensive display of the season in the BCL.

The Spanish team has also claimed the head-to-head advantage against Sassari, who now have three losses in as many games in the Play-Offs and face an uphill struggle in their bid to qualify for the Final 8.

Sassari started off looking very solid and opened up an 11-point lead, 31-20, at the end of the first frame, but Zaragoza flipped a switch with the start of the second period.

The hosts started the second quarter on a 17-4 run and jumped ahead 37-35 on an Elias Harris layup at 6:44 from the halftime buzzer.

The two teams progressed almost hand-in-hand through the rest of the period and until late in the third stanza when Zaragoza switched gears again, and a Nicolas Brussino triple with the start of the final frame gave them their first double-digit lead, 80-69.

Zaragoza scored 24 fast-break points and forced 17 Sassari turnovers, off which they scored 23 points.

Dylan Ennis lad six Zaragoza players in double digits with 18 points and Elias Harris chipped in with 17 points and 4 rebounds. Ethan Happ and Miro Bilan had 17 points and 9 rebounds each in defeat.

Igokea stayed alive in the race for a spot in the Final 8 by snapping Hereda San Pablo Burgos’ eight-game win streak in a 77-75 upset of the reigning BCL champions on Tuesday.

The BCL debutants’ feat is even more impressive considering that Igokea was the nominal host, but the game took place in Burgos to facilitate changes in the schedule of both teams due to the pandemic.

Burgos led 21-16 late in the opening quarter, but that was their biggest lead of the night in an encounter that featured 13 lead changes and never saw a lead larger than six points.

The two teams traded blows until the two-minute mark of the final stanza, when Jackie Carmichael converted an and-one play to give Igokea their biggest lead of the game, 73-67.

Burgos threw everything at the Bosnia and Herzegovina side, and Thad McFadden drilled a tough triple 10 seconds from the final buzzer to tie the scores at 75-75.

With ice running through his veins, Anthony Clemmons drove to the Burgos basket and put his team ahead with a layup 1 second from time.

The Spanish team called a timeout and cleverly inbounded the ball to Jasiel Rivero underneath the Igokea basket. Steven Gray fouled the Cuban big man as he rose for the layup, but Rivero missed both free-throws, and Igokea celebrated the win.

Clemmons paved the way for Igokea with his 20 points, including the game-winner, while Rivero finished with 17 points and 7 rebounds in defeat.

Tofas Bursa picked up their first win in the Play-Offs, 90-79, over Pinar Karsiyaka, at the worst possible time for their fellow Turkish side who are chasing a top-two finish in Group I.

Despite having no mathematical chances of reaching the Final 8, Tofas played arguably their best game of the Play-Offs against a Karsiyaka side that lacked the sense of urgency they needed.

Tofas shot the ball exceptionally well early on and raced to an 18-8 lead midway through the opening quarter, but Karsiyaka balanced proceedings and even led briefly in the second frame.

With the scores tied at 52-all and 4:32 remaining to the end of the third period, Muhsin Yasar converted a three-point play and sparked an 8-0 Tofas mini-run.

Karsiyaka stopped the rot, but Tofas had now grabbed momentum once and for all, stretched the gap back to double digits halfway through the fourth stanza, and were never threatened down the stretch.

Tofas dished 23 assists, found open looks, and shot 10 for 21 from downtown while holding Karsiyaka to 7 of 24 from three-point range.

Tomislav Zubcic paced the hosts with his 21 points, 4 rebounds, 1 assist, and 1 block, while DeVaughn Akoon-Purcell had 18 points, 4 boards, 2 assists, and 1 block. Raymar Morgan finished with a near double-double of 18 points and 9 rebounds in defeat.