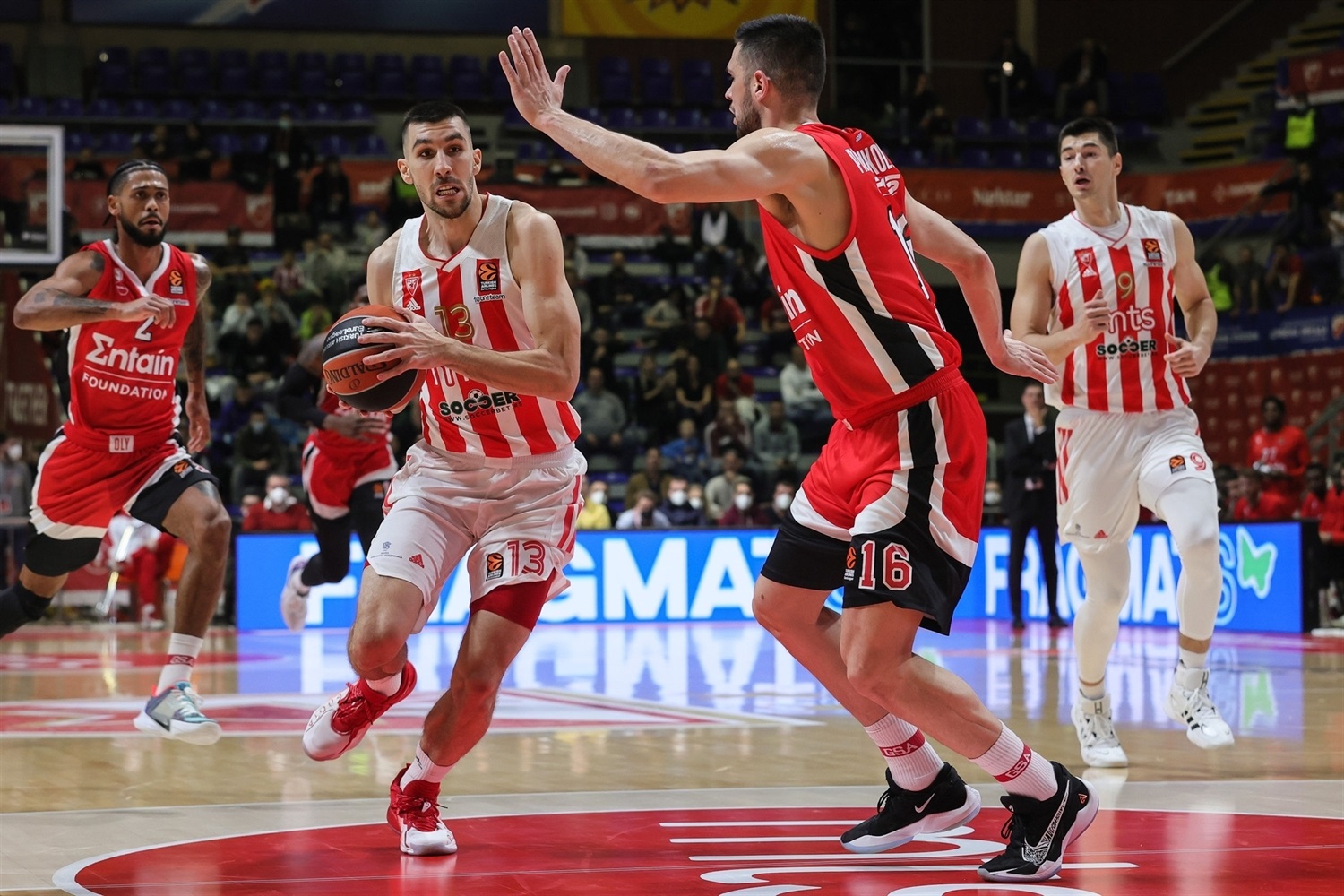 Underdogs win in Euroleague round 14

Thursday of Round 14 in the Turkish Airlines EuroLeague saw four teams from the bottom half of the standings win. Fenerbahce got things rolling with a big win in St Petersburg, where Jan Vesely set a career-high in scoring. Then Nikola Kalinic set a career-high in scoring at home as Crvena Zvezda beat Olympiacos. Bayern bested the defending champs as Vladimir Lucic recorded his first career double-double. UNICS celebrated in Tel Aviv behind a big game from Lorenzo Brown. And Baskonia routed ASVEL for its biggest win of the season. Round 14 promises more drama on Friday when former Soviet rivals Zalgiris and CSKA meet before El Clasico, Barcelona vs. Real Madrid, wraps up the week.

Fenerbahce Beko Istanbul grabbed its second road win of the season by beating Zenit St Petersburg 80-86 at Sibur Arena on Thursday. Fenerbahce won back-to-back games for the first time this season to improve to 5-9 in the standings, while Zenit dropped to 8-6. Jan Vesely paced the winners with a career-high 32 points, Nando De Colo added 18, Dyshawn Pierre 13, and Devin Booker 10 for Fenerbahce. Jordan Loyd paced Zenit with 19 points, and Mindaugas Kuzminskas added 17. Mateusz Ponitka stepped up early and got help from Jordan Mickey and Sergey Karasev to give Zenit an 18-16 lead after 10 minutes. Zenit found another go-to guy in Kuzminskas, but Vesely, De Colo, and Sehmus Hazer helped keep Fenerbahce close, 41-40 at the break. Booker put the visitors in charge, 47-50 before Kuzminskas and Loyd fueled a Zenit push to regain the lead at 62-61 at the end of the third quarter. Booker and De Colo filled a 0-8 run that gave Fenerbahce a 64-69, but Kuzminskas and Andrey Zubkov responded to put Zenit ahead 72-71 midway through the fourth quarter. De Colo and an outstanding Vesely stepped up in crunch time to carry Fenerbahce to victory.

Nikola Kalinic scored a career-high 25 points and dished six assists to lead Crvena Zvezda Belgrade to a hard-fought 81-76 victory over Olympiacos Piraeus on Thursday night at Aleksandar Nikolic Hall in the Serbian capital. The Zvezda star scored 8 in the fourth quarter alone, during which the score was tied five times before Kalinic scored and assisted in a game-breaking 9-1 run that made it 78-70 with 1 minute to go. Luka Mitrovic contributed 12 points and eight rebounds in the winning effort, Dejan Davidovac added 11 points, and Nikola Ivanovic and Nate Wolters scored ten each. The win was Zvezda’s second in a row to take its record to 6-8. Tyler Dorsey paced the Reds with 18 points and Kostas Sloukas and Sasha Vezenkov each scored 12 in the defeat, which snapped Olympiacos’s three-game winning streak and made it 9-5 on the season.

Bayern Munich continued its strong play at home this season by fending off Anadolu Efes Istanbul 83-71 for its fourth straight win at Audi Dome. The game, played without fans due to state restrictions concerning the COVID-19 pandemic, was tight until Bayern went up 10 points early in the second half. Efes came back to take the lead only to see the hosts reclaim a double-digit lead with 3 minutes to play and improve to 7-7 overall and 5-2 at home. Vladimir Lucic collected 18 points and 12 rebounds in the win for Bayern, which was playing without the injured Darrun Hilliard. Augustine Rubit and DeShaun Thomas both scored 18 points as well, with Othello Hunter chipping in 10 points. Efes dropped its second straight game to fall to 6-8. Rodrigue Beaubois and Shane Larkin both scored 18 points, while Bryant Dunston had 13 points, and Vasilije Micic added 12 points.

UNICS Kazan sent a message that echoed throughout the competition by downing Maccabi Playtika Tel Aviv 74-85 at Menora Mivtachin Arena on Thursday. UNICS improved to 8-6 in the standings and registered its fifth win in the last six games. Maccabi dropped to 7-7 and is now on a four-game losing streak. Lorenzo Brown led the winners with 26 points, six rebounds, and six assists. Isaiah Canaan added 18 points, Mario Hezonja had 14, and O.J. Mayo scored 11 for UNICS. Scottie Wilbekin paced Maccabi with 18 points, Jalen Reynolds and James Nunnally each added 12, and Ante Zizic had 11 for the hosts. The hosts led by three heading into the fourth quarter, when Hezonja and Lorenzo Brown took over as UNICS outscored Maccabi 8-22 to record an important win.

Bitci Baskonia Vitoria-Gasteiz snapped a three-game losing streak by comfortably overcoming LDLC ASVEL Villeurbanne, 91-66, in a game of two halves on Thursday night. The first half was very closely contested with several lead changes, and neither team could get ahead by more than 5 points, as the interval came with Baskonia up 45-44. But the home side raced into a double-digit lead in the third quarter, and ASVEL never looked like recovering as its offense suffered a misfiring second half. Simone Fontecchio led Baskonia by scoring 15 points on his 26th birthday. Rokas Giedraitis also scored 15, while Steven Enoch added 14, Matt Costello and Wade Baldwin IV both scored 13. Chris Jones paced ASVEL with 17 points, and Victor Wembanyama added 10 points. Baskonia improves to 5-9 while ASVEL now has an equal number of wins and losses at 7-7.