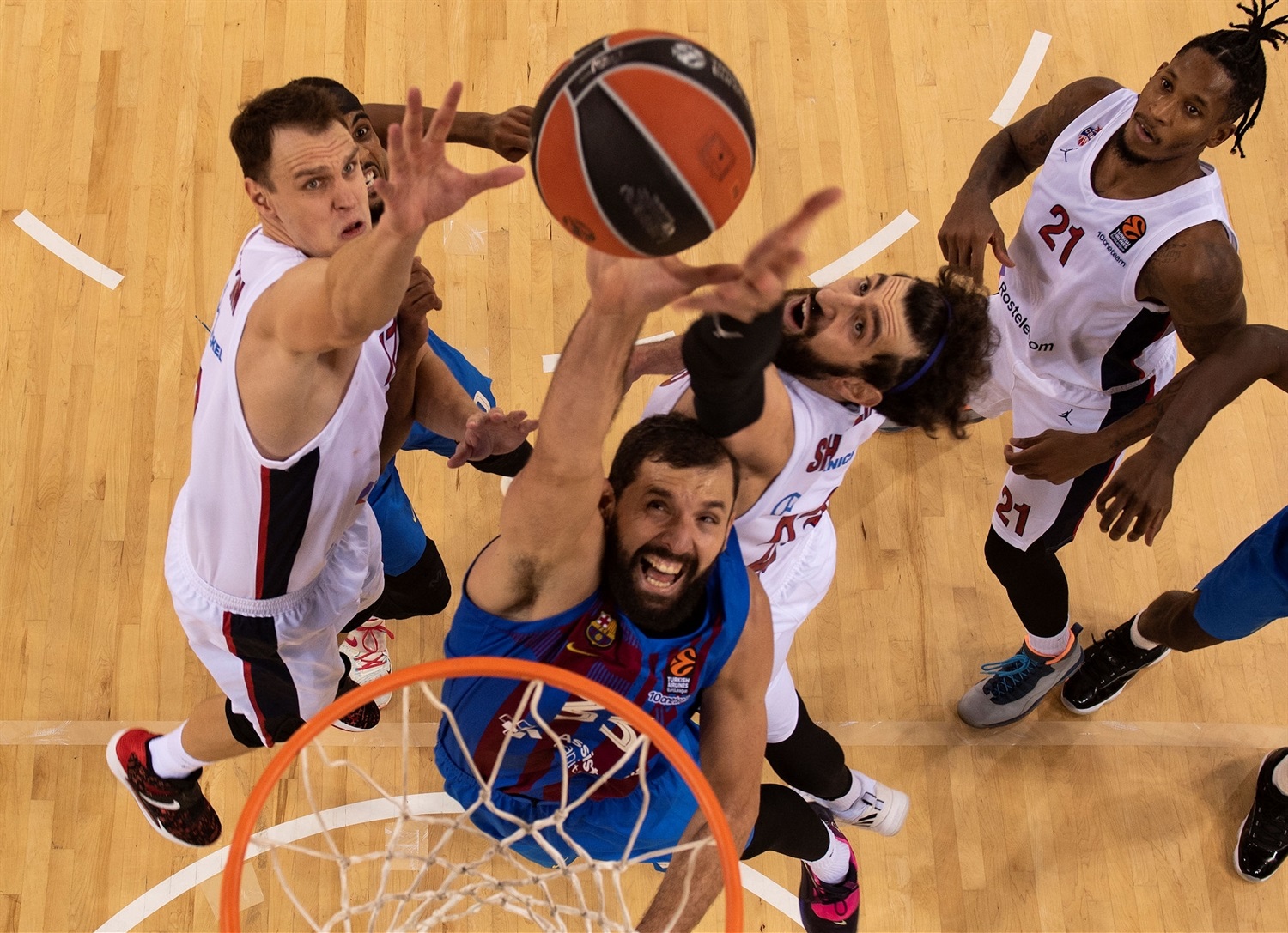 Three-way tie at the top of Euroleague standings

Home-court advantage came to the fore in Round 10 – the first of two rounds being played in the third week of November. Only one team, Real Madrid, managed to win on the road while eight other teams celebrated with their fans. Among the major highlights were Zalgiris capturing its first win of the season, UNICS knocking off top-ranked Milan, and Barcelona surviving a thriller against CSKA. The results left a three-way tie atop the Euroleague standings between Milan, Barcelona, and Real with 8-2 records with Zenit and Maccabi, which both won at home, one win behind.

Zenit St Petersburg grabbed its fourth consecutive win by downing ALBA Berlin 75-66 at Sibur Arena on Wednesday. Zenit improved to 7-3 in the standings and dropped ALBA to 3-7. Jordan Loyd led the winners with 25 points, Jordan Mickey added 12, and Conner Frankamp scored 10 for Zenit. Marcus Eriksson paced ALBA with 20 points. Johannes Thiemann had 11 and Maodo Lo 10 for the visitors. Loyd, Arturas Gudaitis, and Mickey helped Zenit to a 20-14 lead after 10 minutes. Loyd kept pushing Zenit after that, and Mickey, Frankamp, and Billy Baron each buried a three-pointer to make it a double-digit game, 42-30, at halftime. Eriksson scored 14 points in the third quarter, but Loyd ensured the hosts held a 59-50 margin after 30 minutes. Little changed after that, as Zenit kept a safe margin until the final buzzer.

UNICS Kazan used a three-point barrage and a tough defense to hand league leader AX Armani Exchange Milan its second loss of the season with a 97-71 rout at home. UNICS tied a club record by draining 14 triples in winning its fourth game in the last five for a 5-5 record. UNICS put together a 25-7 run in the second quarter to build a 14-point lead and then put the game away with a 20-7 surge in the third quarter to lead by 22 points. Isaiah Canaan knocked down six three-pointers in scoring a team-high 22 points in the win while OJ Mayo made five triples for 20 points and John Brown added 19 points in the win over what was the league’s top defense coming into the contest. Milan saw its three-game winning streak end in dropping to 8-2. Luigi Datome, Shavon Shields, and Nicolo Melli all scored 10 points to lead Milan in scoring.

Anadolu Efes Istanbul claimed its second win in a row for the first time this season by defeating visiting Olympiacos Piraeus 88-69 at Sinan Erdem Sports Hall on Wednesday night. The hosts, whose record improved to 4-6, used a strong defensive display in the fourth quarter, in which they held Olympiacos to just 3 points to break open a game that had been close for the first 30 minutes. Rodrigue Beaubois led the winners with a career-high 29 points on 7-of-10 in three-point shooting, followed by Vasiljie Micic, who tallied 19 points. Shane Larkin posted 10 points and assists. Sasha Vezenkov led the Reds with 17 points and eight rebounds for a PIR of 26, and Moustapha Fall finished with 15 points. Olympiacos remained winless on the road and dropped to 6-4.

Scottie Wilbekin scored a career-high 37 points leading Maccabi Playtika Tel Aviv in a highly entertaining clash to a 95-84 win over visiting AS Monaco on Wednesday night. Maccabi improved to 7-3 on the season, while Monaco dropped to 5-5. The two teams traded punches for most of the game, and Monaco led 67-69 early in the fourth, but Wilbekin and James Nunnally led Maccabi in scoring 33 fourth-quarter points and to another victory. Nunnally finished with 16 points, Ante Zizic collected 14 points plus 11 rebounds, and Jalen Reynolds scored 10 in a winning effort. Donta Hall paced Monaco with 18 points and nine rebounds, Dwayne Bacon netted 16, and Mike James had 14 points and six assists.

FC Barcelona rallied from a double-digit margin in the fourth quarter to beat CSKA Moscow 81-73 at Palau Blaugrana on Wednesday. Barcelona improved to 8-2 in the Turkish Airlines EuroLeague standings while CSKA dropped to 5-5. Nikola Mirotic led the winners with 21 points, Brandon Davies added 14, Kyle Kuric 13, and Nick Calathes 10 for Barcelona. Johannes Voigtmann paced CSKA with 21 points, and Toko Shengelia added 17 for the guests. Barcelona led 38-27 at halftime, but CSKA buried eight three-point shots in the third quarter – Voigtmann buried 4, Shengelia 2, and Marius Grigonis and Nikita Kurbanov 1 each – to lead 51-60 after 30 minutes. Mirotic had 8 points in a game-changing 19-3 run that put Barcelona ahead for good, 70-64, and he made sure his team held on late.