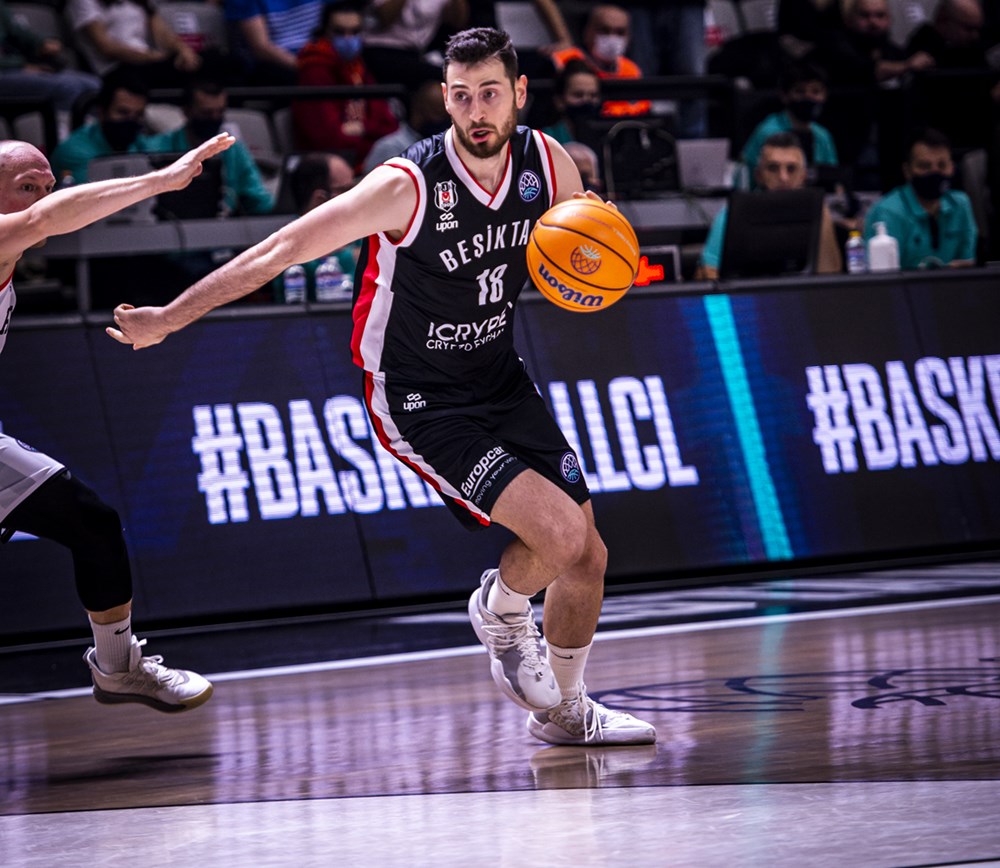 Besiktas Icrypex entered the game with a 1-1 record, same as Rytas Vilnius, but the Lithuanian side had a better +/- at +14, compared to -6 for the black-and-white.

The hosts opened the game stronger, holding Rytas to just six first-quarter points, building a 16-point lead after the opening ten minutes, and opening up the biggest margin at 21 points.

There was a memorable moment in the first half for the Besiktas fans. Their boy wonder Yagiz Aksu scored his first BCL points – Aksu is just 15 years, nine months, and two days old, still not the youngest scorer in the history of BCL, since Lefteris Mantzoukas was only 15 years, six months, and 29 days old when he scored for Promitheas Patras against Segafredo Virtus Bologna in 2019.

However, there wasn’t a lot to cheer about for the Besiktas faithful after the break. Rytas found their rhythm in the third and held Besiktas to just four field goals over those ten minutes.

The comeback was completed with three minutes left in the game, with an alley-oop to Maurice Ndour, which gave Rytas their first lead since the opening minute, and teams traded blows the rest of the way.

Rytas had a chance to win it in their final possession of the fourth quarter. They drew up a play for none other than Ivan Buva, a former Besiktas player, who drew a foul with 1.6 seconds left but only knocked down one free throw to send the game to overtime at 69-all.

To keep the game in perfect balance, it had to come down to one last shot by Besiktas Icrypex at the end of the first overtime. Isaiah Whitehead had the perfect timing, getting the pull-up two off just before the buzzer, but the ball bounced around the rim and somehow stayed out, adding another five minutes to the game at 74-all.

Both teams had their chance to win it in the second overtime. Whitehead’s heroics carried Besiktas over the line – Rytas had two shots to force third overtime, Girdziunas and Margiris Normantas missed both of them, Besiktas held on for an 82-79 win.

Blueitt had 21 points. Lawson picked up a double-double with 17 points and 12 boards. Whitehead almost had one, too – 16 points, nine assists. Normantas scored 18 for Rytas, who dropped to 1-2, while Besiktas rose to 2-1 after the first part of the Regular Season.

Carter shines to send Nizhny to 0-3

Nizhny Novgorod played and hosted the Final eight last season but started Season Six with two straight defeats, at home to Unicaja and on the road in Dijon. Lavrio Megabolt came into the game at 1-1.

Lavrio’s head coach Christos Serelis loves to give the green light to his players when he feels somebody is hot, and Tyson Carter definitely was hot. The 23-year-old guard counted to 14 points in the first quarter alone and 21 at the half, getting Lavrio Megabolt a 49-44 lead.

Nizhny Novgorod had an answer for his performance, stunting, sending double teams, getting the ball out of his hands, but this was a game that showed why Lavrio Megabolt’s front office insisted on keeping Carter in Greece for another season over the summer of 2021.

The flashy guard from Mississippi State started his professional career with Lavrio in 2020, averaged 14 points per game in the Greek League last time around, and against Zoran Lukic’s defensive schemes, he went all the way to scoring 35 points, just one less than his total over the first two games.

Carter’s beautiful layup in traffic gave Lavrio a two-point lead with just 34.6 left to play in the fourth quarter.

Nizhny Novgorod did not panic and almost found a hero of their own, as Ivan Strebkov knocked down a massive three-pointer with four seconds on the game clock.

Petros Geromichalos was in a similar situation as Ivan Buva a couple of scrolls ago and had the same kind of success from the charity stripe, meaning we had another overtime on a busy BCL Tuesday.

It was a one-way street in the additional five minutes, Carter getting help from Kenny Goins and Vasilis Moutaros, who hit the dagger three-pointer. It finished 95-86.

Carter shot 13-of-20 from the field, including 5-of-8 from deep, and also had six assists. Mouratos scored 15, Marcus Lewis 11, Dimitrios Kaklamanakis collected a 10-point, 13-rebound double-double. Strebkov had 21 for Nizhny Novgorod, but the 2021 Final 8 hosts are now down at 0-3.

“Maybe it would’ve been better if Lavrio made those free throws with three seconds left (in the fourth quarter). Then we would’ve had a one-point defeat, and this way, it finished by 10, 11… Or nine? Okay, nine. We will try to chase it on our court,” coach Lukic explained.

Hereda San Pablo Burgos won back-to-back titles in the BCL but found themselves bottom of the group at 1-1, with a -10 points’ difference heading into this week. Oldenburg was also 1-1, standing at +2.

There was nothing between Zan Tabak’s and Mladen Drijencic’s teams after one, tied at 24-all, and EWE Baskets Oldenburg found a way to a 42-40 lead at the break but could not take over the game – five points was their biggest lead in the first half.

Whatever Tabak told his players in the locker room worked. Hereda San Pablo Burgos came out a different team in the third quarter, riding the wave of enthusiasm from the stands, getting red hot, and scoring 33 points over those ten minutes, creating a 73-59 lead after three quarters of action.

The quarter belonged to Tyrus McGee and Suleiman Braimoh. Braimoh was 4-of-4 from the field in the third, getting to 12 points in a hurry, while McGee had the usual McGee game, knocking down tough shots like layups to climb to 18 points in 16 minutes before the fourth quarter started.

A 33-point quarter started a way too familiar party in the stands. Burgos looked unstoppable, knocking down dagger shots every time Oldenburg sniffed a chance to cut the gap back to single digits.

With 52 points in the second half, the defending champs won the game 92-80, creating a substantial gap to take the tiebreaker if needed.

McGee finished with 22, Braimoh had 16 on a perfect shooting night, Aleksej Nikolic scored 12, and Vitor Benite rounded up the double-digit scorers with 10. Honorable mention: Alex Renfroe and his nine assists off the bench.

Tai Odiase dunked his way to 20 points for Oldenburg. Max Heidegger scored 18 before fouling out late in the game.