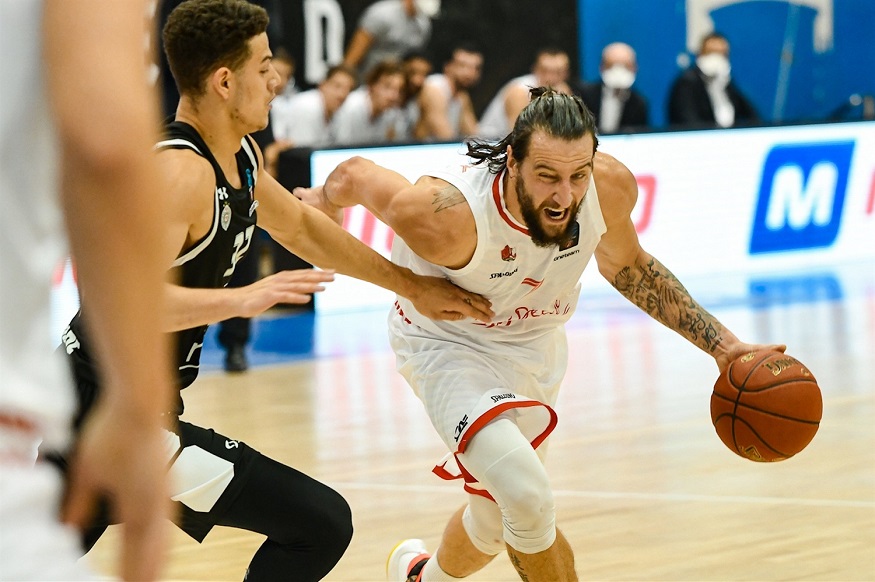 Three overtime games in the Eurocup

Round 5 was full of drama in the 7DAYS EuroCup. The visiting teams won six games, three games went to overtime, and another saw a team roar back from an 11-point fourth-quarter deficit to win in regulation! Joventut Badalona and Virtus Segafredo Bologna are sitting pretty with 5-0 records, and Mornar Bar made history by winning the first clash between Montenegrin clubs in competition history.

Vladimir Brodziansky hit a hook shot with 2.8 seconds left in overtime to give shorthanded Joventut Badalona a thrilling 91-93 road victory over UNICS Kazan to remain undefeated. Joventut was missing stars Ante Tomic and Pau Ribas, but Brodziansky came up with a career-high 20 points in helping the visitors improve to 5-0. UNICS saw its two-game winning streak end in falling to 2-2 despite Jordan Morgan collecting 23 points and 8 rebounds.

JL Bourg en Bresse led from start to finish en route to a resounding 76-89 road win over Partizan NIS Belgrade in the Serbian capital on Wednesday night. Bourg, which played its first games in more than two weeks, improved to 2-1, while Partizan dropped to 2-3. Pierre Pelos shined with 28 points for the winners. Nemanja Gordic paced Partizan with 15 points.

Umana Reyer Venice bounced back from recent losses by downing Bahcesehir Koleji Istanbul 88-82 in overtime. Reyer took its record to 2-2, while Bahcesehir dropped to 0-5. Michael Bramos led the winners with 15 points and 9 rebounds. Erick Green paced Bahcesehir with 22 points.

Unicaja Malaga held on to beat ratiopharm Ulm 76-81 for its third consecutive victory. Unicaja raised its record to 4-1 and took over first place in the group. Ulm fell to 1-4 with its fourth straight defeat. Francis Alonso paced Unicaja with 21 points while hitting 3 of the team’s 13 three-pointers. Dylan Ostetkowski led Ulm with 17 points.

Isaiah Whitehead knocked down a long triple in the dying seconds of overtime to lift Mornar Bar to an 85-82 victory over archrival Buducnost VOLI Podgorica at Topolica Sports Hall in the first game ever between two Montenegrin clubs in the EuroCup. Mornar remained undefeated at home in improving to 3-2 while dropping Buducnost to the same record. Jacob Pullen, who assisted on the game-winner, led the winners with 23 points and 5 assists, Melvin Ejim paced Buducnost with 15 points.

Boulogne Metropolitans 92 raced back from a double-digit deficit in the fourth quarter to knock off Germani Brescia 70-75 for its third straight win. Metropolitans used a 0-15 run to go-ahead 68-74 in the closing minute to improve to 3-2. Rob Gray scored 10 of his 16 points in the final 3 minutes for the winners. Brescia could not hold an 11-point margin over the final 7 minutes – and a 10-point advantage with 5 minutes left – and lost its third straight in falling to 1-4. Dusan Ristic scored 14 points in the loss.

In Group C’s only Wednesday game, Lokomotiv Kuban Krasnodar grabbed its third consecutive by downing AS Monaco 72-88 on the road. Lokomotiv improved to 4-1 and second at the halfway mark of this stage, while Monaco is third at 3-2. Kevin Hervey led the winners with 17 points. Marcos Knight paced Monaco with 17.

Group D has seen all three of its games in this round postponed due to COVID-19 cases and restrictions. Nanterre 92 vs. Frutti Extra Bursaspor, originally scheduled for Tuesday, was suspended at the hosts’ request. Two games that had originally been scheduled for Wednesday – Cedevita Olimpija Ljubljana vs. Promitheas Patras and Herbalife Gran Canaria vs. Dolomiti Energia Trento – were suspended at the request of the visiting teams. All three will be rescheduled for later dates.