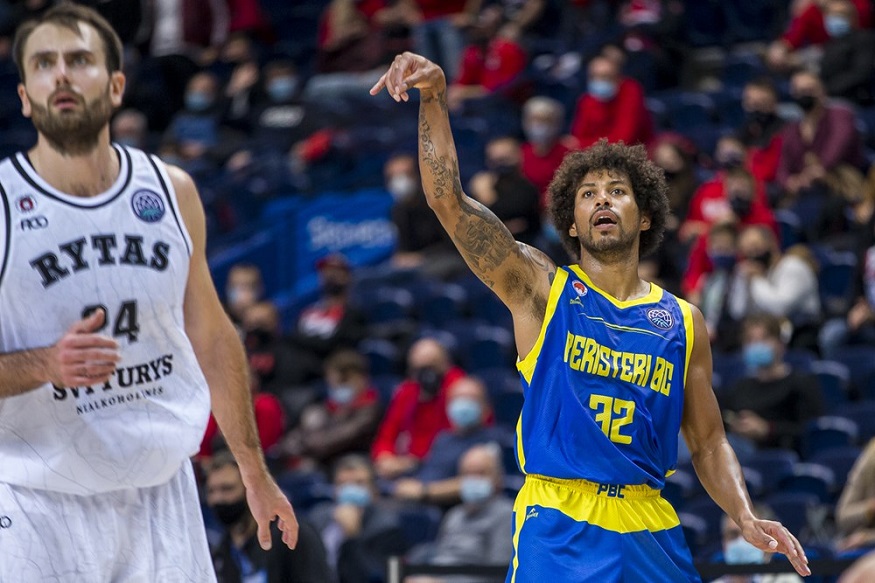 Steven Gray of Peristeri hit 10 three-pointers and registered a new BCL (Basketball Championsleague) efficiency rating record to lead his team to a road win at Rytas Vilnius in Group E in the BCL. Yesterday was also a night that saw Turk Telekom edge out Hapoel Jerusalem in the big game of Group G. In Group F, both encounters ended in heartbreak for the hosts as Karsiyaka and Bamberg won on the road.

Steven Gray delivered the best individual performance by any player in BCL history. Moreover, Peristeri became the first team to score a century in the 2020-21 season, celebrating a 106-88 triumph at Rytas Vilnius.

The American guard registered an efficiency rating of 47 to surpass the previous record of 43, held by Keifer Sykes. He also hit 10 three-pointers to tie the record for most made in a single BCL game.

Gray finished with a career-high 39 points while shooting 10 of 13 from downtown. He also added 7 assists, 5 steals, and 3 rebounds. Tre McLean had 19 points, and Marvin Jones collected a double-double of 14 points and 10 rebounds.

At one time, Turk Telekom trailed 49-41 but poured in 30 points in nine minutes of play to grab a 71-62 lead less than two minutes before the end of the third period.

Wiltjer had 5 rebounds and 4 assists to go with his 33 points. Tyler Ennis finished with 16 points, 4 boards, and 3 assists. TaShawn Thomas had 21 points and 7 rebounds for Hapoel in a losing effort.

The more experienced Pinar Karsiyaka beat a young RETAbet Bilbao team and clinched an 81-72 road win upon their return to the BCL.

Both teams struggled with their three-point shooting and never saw either one leading by more than 7 points. They were trading lots of punches during the first three quarters.

Karsiyaka, however, held the hosts, who were playing their first-ever BCL contest, to just 6 points during the first eight minutes of the final stanza as D. J. Kennedy sunk a pair of free-throws 7:28 from the final buzzer to put the visitors back in the lead, 68-67.

In the clutch, Tony Taylor, who was inspirational for Karsiyaka, made two jumpers in quick succession to stretch the Turkish lead to 78-72 with 1:30 left to play. After Bilbao missed a three-pointer on the other end, Yunus Sonsirma sealed the deal for the guests by making it 80-72 just 44 seconds from time.

Brose Bamberg delivered a defensive masterclass in Bologna and penalized every Fortitudo turnover to cruise to a 100-63  victory in the premiere for both teams in Group F.

The German team scored an eye-popping 35 points off Fortitudo’s 19 turnovers and dished out 29 assists as nine of their players wrote their name on the scoreboard.

A Tyler Larson layup right before the 8-minute mark in the second quarter instigated a 21-6 Bamberg burst, and the Germans stretched their 26-21 lead to 47-27 in the blink of an eye.

Bamberg was relentless as they kept their foot on the gas after the interval and led by as many as 38 points in the fourth frame.