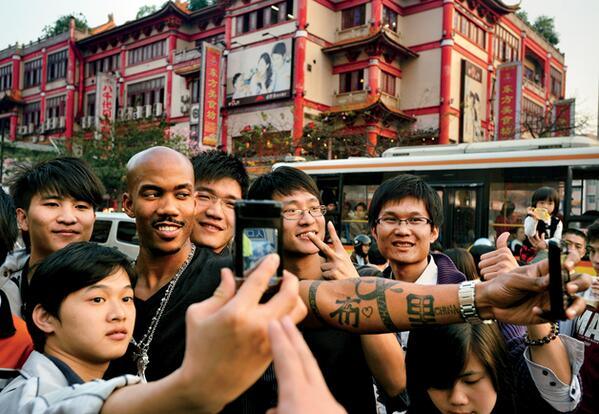 Stephon Marbury in love with China

After a roller-coaster NBA career, Stephon Marbury has found peace in basketball-crazed China. The two-time all-star is thriving on the court with the Beijing Ducks while becoming one with his adopted hometown away from basketball.

He is so entrenched, he wants to one day coach China’s national team.

“I plan on living here for the rest of my life,” the 37-year-old point guard and Brooklyn native said in an interview in the lobby of his plush apartment building in the heart of Beijing. “I think they respect me enough to be able to give me the opportunity.”

China is a world away from Marbury’s life in the U.S., where he endured a string of disappointing stints with several NBA teams. But he has found his groove in Beijing, leading the Ducks to two Chinese Basketball Association championships. He is an unrivaled fan favorite and the team’s on-court leader — the organization has even erected a statue of him in front of its arena.

Marbury has capitalized on the opportunities China offers to foreign basketball players and other athletes capable of adjusting to the considerable cultural, linguistic and culinary challenges of life in the rising Asian power. Already dominant at the Olympics and Asian Games, the world’s second largest economy is now undergoing a boom in professional sports stoked by foreign coaches and players.

“I don’t make nowhere near the money that I made when I was playing in the NBA,” Marbury said, “but I’m way happier, so I mean, what is that to say?”  A big part of Marbury’s Chinese appeal has been his willingness to embrace local culture and make himself accessible to fans. He rides the Beijing subway with a backpack and headphones, posing for photos with people he meets along the way. He dines at local eateries, and digs into the same simple meals as his Chinese teammates.

Marbury has been a vocal supporter of Guoan, Beijing’s beloved local football team, and studied the graceful martial art of tai chi. He even took a stab at learning Chinese before a knee surgery threw him off his lessons. He’s also active on Weibo, the ubiquitous Chinese version of Twitter. A typical post: “Good morning China! Live in the moment with pure loving intentions to all. Love is Love!!!” He wrote a column — “Starbury News” — in the China Daily newspaper, and if he had any negative feelings about China, he kept them to himself.

“Marbury was seen as a loner in America, but he’s completely changed his image here in China. He’s shown huge interest helping both his team and young people generally,” said veteran Chinese sportscaster Xu Jicheng. Basketball is already hugely popular in China, as is American music and fashion. Urban courts are filled with youngsters showing off their moves, while hip-hop fashions are a favorite of those born in the 1980s and ’90s. Fans have also connected with Marbury.

When he scores for the Ducks, each basket is celebrated by an MC and echoed by fans at the arena operated by the team’s sponsor, Capital Iron and Steel, in Beijing’s far western suburbs. Marbury can still score, he had a 46-point game in a one-point loss to the Xinjiang Flying Tigers. It’s not exactly Madison Square Garden, but crowds at the Shougang Basketball Center are enthusiastic. Songs by Sugar Hill Gang and other hip hop classics play over the PA — with Marbury at the center of it all.

“Marbury is why we come to these games. He’s the one who’s really made them play like they never played before,” said Ricky Chen, a 26-year-old Beijing office worker who endured a two-hour trip on the subway to catch a game with his girlfriend.

A college standout at Georgia Tech, Marbury was a first-round pick in the 1996 NBA draft by Milwaukee, but traded to Minnesota. He also played for New Jersey and Phoenix before joining the New York Knicks amid high expectations that were never realized. His last stop in the NBA was with Boston in 2009. With his NBA options becoming limited, Marbury decided in 2010 to head for China in hopes of jump-starting his career. That leap of faith landed him initially in gritty Taiyuan in China’s northern coal country. A contract dispute with the Brave Dragons soon left him high and dry, although Marbury said he never considered heading home.

“I was, like, if I go back to America I’m going to get killed by the media. I’m done. This is it. My career is done, my life is over with,” Marbury said.

Salvation came in the form of the Foshan Dragons in the industrial south. Along the way, he has relaunched his Starbury sportswear brand, whose logo is tattooed on his shaved head. This fall he was featured in a live musical production using his China experience as an allegory for overcoming hardship. Marbury is one of dozens of foreign players in the CBA, which allows teams to play two non-Chinese players at a time for a total of six quarters per game. Some have found the success that eluded them in the U.S., such as former NBA journeyman Lester Hudson, the CBA’s MVP last season, and Jamaal Franklin, a former second-round draft pick of the Memphis Grizzlies, the league’s leading scorer this season.

Other NBA All-Stars have given China a shot — including Metta World Peace, Tracy McGrady and Gilbert Arenas, with varying degrees of success. But none embraced the country in the way Marbury has.

“It makes him one of the few CBA foreigners that aren’t likely to be painted as mercenaries,” said Andrew Crawford, whose website, Shark Fin Hoops, covers Chinese basketball. “He’s the first foreigner in the CBA to make a huge and sustained deal out of how much he likes being in Beijing, and that means a lot.”

Marbury believes he can play another two or three years but no matter what happens on the court — or with his coaching ambitions — he plans to keep China at the center of his life and career.

“I am forever indebted to this country for them helping change my life and my basketball career, and how I’m viewed in the world of basketball.”