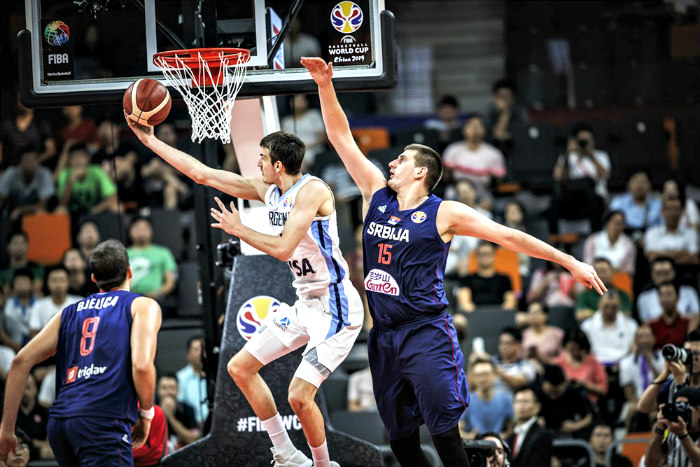 All good things come to an end, as they say. And on Tuesday night Serbia’s run in the 2019 FIBA World Cup ended in a 97-87 loss to Argentina in the quarterfinals.

Argentina remains unbeaten in the 2019 FIBA World Cup and made a huge statement on Tuesday by slaying what many considered to be one of the Titans coming into the competition.

Argentina’s Facundo Campazzo was stellar in this game, pacing his team with an 18-point, 12-assist double-double to help his team outgun their opponents. He also added six rebounds, three steals and three treys in a well-rounded performance. Luis Scola poured in a team-high 20 points as he stood tall amid the Serbian Giants in the paint.

Serbia went to their go-to players, Bogdan Bogdanovic and Nikola Jokic, both of whom played well but sadly fell short when it came to keeping up with Argentina’s hot shooting in this game.

Serbia controlled the glass, recording 42 rebounds compared to just 29 by Argentina. Their relentless attacks, both in the low post and from the outside, allowed Argentina to stay in control for most of the game.

Serbia goes home, heartbroken. Argentina now advances to the semifinals where they await the winner of the USA-FRA game tonight.

In the other game, Spain delivered as expected, beating Poland 90-78 in what looked like an easy win. The Spaniards led from start to finish and were not in any serious risk of losing control of the game at any point.

Poland should be proud of where they reached and should feel no shame in losing to a global basketball powerhouse such as Spain.

Ricky Rubio continued on his fantastic run in the tournament and posted 19 points, five rebounds and nine assists to lead Spain to victory. Willy Hernangomez and Rudy Fernandez chipped in with 18 and 16 points, respectively.

Spain will face off against the winner of the sure-to-be exciting game between Australia and the Czech Republic.