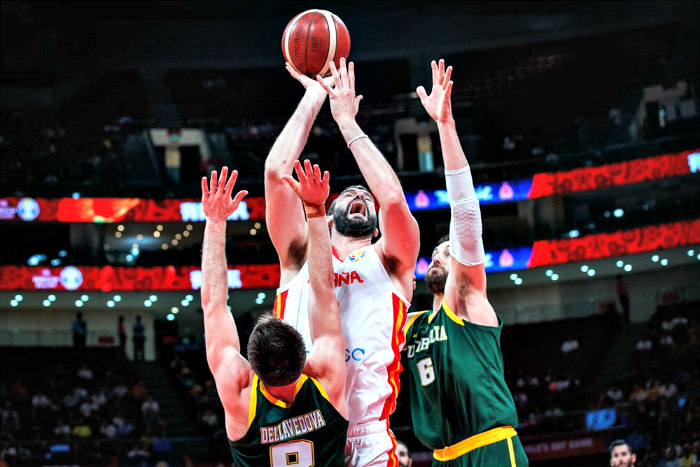 Spain and Argentina to play for FIBA World Cup gold

And then there were two… Spain and Argentina defeated their respective opponents in the semifinals of the 2019 FIBA World Cup and are set to face off and battle for the gold medal on Sunday.

The Spain vs. Australia game was one for the Ages. The thrilling contest went down the wire, thrice, thanks to two extra overtime periods. After the dust settled, it was Spain that emerged victorious, 95-88. By the way, this was the first-ever double-overtime game in the history of the FIBA World Cup.

Marc Gasol, who was named the game MVP, was sensational for Spain. The 34-year-old veteran turned back the clock and put up phenomenal performance with 33 points, six rebounds, four assists and two blocks.

Spain’s veterans came to play hard in this highly contested game and put up a triple-threat effort. Ricky Rubio put up a double-double with 19 points, 12 assists, seven rebounds and four steals. Sergio Llull sank four 3-pointers en route to his 17 points and also added six dimes of his own. Llull turned up the heat just in time and sank two of those four treys in a key juncture after regulation time had come and gone, sparking Spain’s run to victory.

Patty Mills had a shot to lock up the win for Australia but missed a key free throw that will likely haunt him for years to come. Still, the guard has been nothing short of amazing in the FIBA World Cup. This game was no exception. He put up a game-high 34 points but also committed seven turnovers, as Spain focused their defense on him. Nic Kay chimed in with a double-double, posting 16 points and 11 rebounds.

Argentina stayed undefeated in the FIBA World Cup on Thursday, leading France from start to finish to come up with the 80-66 win.

Despite the now-visible gray hairs on his head, a 39-year-old Luis Scola played like a pillar of consistency throughout the tournament. He defied Father Time in this game and powered Argentina to victory on the shoulders of his 28 points, 13 rebounds and three triples. Gabriel Deck and Facundo Campazzo added 13 and 12 points, respectively.

On France’s side, Rudy Gobert was noticeably quiet as he was held to just three points but still grabbed 11 rebounds. Evan Fournier mustered 16 points on 6-of-17 shooting from the field and Frank Ntilikina put up the same points but was more efficient as he went 7-for-12 overall from the field.

Nando De Colo was stifled and could not deliver more than his 11 points for the night.

Basketball fans all over the world will be in for a special treat. Both Argentina and Spain have colorful histories in international hoops and it should be both fun and entertaining to watch both teams battle for the gold in the 2019 FIBA World Cup.