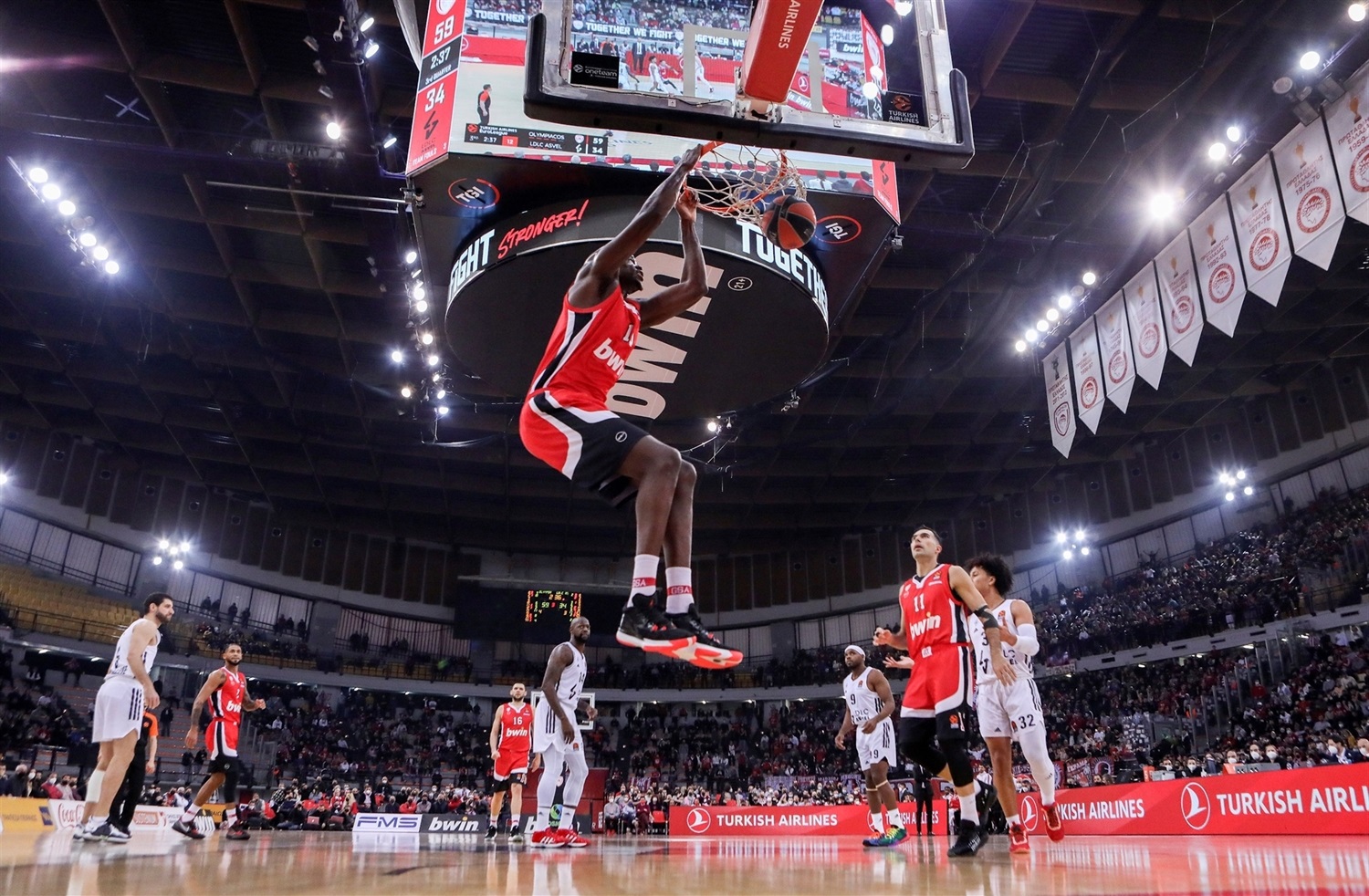 After seven teams completed 48-hour sweeps in a Round 16 full of tight games, a week that began with two teams on double-digit victories ended with five more joining them. On Thursday, the top two teams in the standings – Barcelona (14-2) and Real (13-3) – had to sweat out road wins. While on Friday, third-place Olympiacos (11-3) and two of four teams tied fourth place – UNICS (10-6) and Zenit (10-6) – both finished off their sweeps. Their tie with Milan (10-6) was joined by CSKA (10-6) after its tense bounce-back victory in Berlin. Defending champ Efes (8-8) was another two-game winner, good enough to take over the eighth and final playoff spot. The week’s seventh sweeper, Fenerbahce (7-9), is part now of a quartet of teams tied just below the playoff spots. The flip side saw losers of both double-round games – Maccabi (7-9), ASVEL (7-9), Bayern (7-9), ALBA (5-11), Baskonia (5-11), Panathinaikos (4-12) and Zalgiris (3-13) – watch their task grow more difficult from now on. Finally, Zvezda (6-9) finished another Friday thriller by beating Bayern before a raucous crowd to join three other teams that split their weeks with a win and a loss: CSKA, Milan, and Monaco (6-10).

In a deadlocked game through three quarters, UNICS Kazan dominated the fourth to grab its third consecutive win by downing Zalgiris Kaunas 66-53 at home on Friday. UNICS improved to 10-6 in the standings and is 9-2 in the last 11 games. Meanwhile, Zalgiris dropped to 3-13 and lost another chance to record its first road victory. Mario Hezonja led the winners with 20 points. Tonye Jekiri and Isaiah Canaan each added 11, while Lorenzo Brown had a career-high ten assists for UNICS. Marek Blazevic and Janis Strelnieks led Zalgiris with 9 points apiece. Canaan and Jekiri allowed UNICS to get a 13-12 lead after 10 minutes. Hezonja and Canaan stepped up late in the first half, keeping the hosts ahead, 26-23, at halftime. Hezonja took over after the break to give UNICS a 40-35 margin, but Strelnieks helped Zalgiris tie the game, 42-42, at the end of the third quarter. Lorenzo Brown and Jekiri fueled a 10-0 fourth-quarter blast that sealed the outcome, 52-42, as Zalgiris never recovered.

Zenit St Petersburg withstood a big comeback from AS Monaco to gain a 74-85 road win and cement its place in the playoffs positions. The visitors dominated the early stages and led by 17 points at the end of the first quarter, but the hosts responded vigorously, and it was 43-45 at halftime. Monaco – whose new coach Sasa Obradovic was making his home debut – had the better of the third quarter and held several narrow leads before Zenit went on a 0-11 run midway through the final period, and the visitors held on from there. Jordan Loyd was the key character, scoring 14 of his 20 points in the fourth quarter, making all 5 of his three-point attempts. Billy Baron netted 19 points on 5-of-8 three-point shooting, and Arturas Gudaitis paired 15 points with seven rebounds. Dwayne Bacon paced Monaco with 21 points, Danilo Andjusic scored 15 points, and Mike James had 8 points with nine assists. Zenit improves to 10-6, while Monaco is now 6-10.

CSKA Moscow bounced back from a tough loss earlier in the week by winning a thriller 90-93 at ALBA Berlin, which went to the last shot. The game was tight throughout, with the biggest lead for either team being eight points, and CSKA built its largest advantage of seven points in the closing minutes to hold on. CSKA, which came into the game having lost 67-88 at home against UNICS Kazan, improved to 10-6 thanks to Johannes Voigtmann pacing five players in double figures with 16 points to go with five rebounds, five assists, and three blocks. Will Clyburn scored 15 points, Alexey Shved added 14, Joel Bolomboy tallied 12 points, and Toko Shengelia chipped in 12 points and ten rebounds in the victory. ALBA has now lost three straight in dropping to 5-11 – though the team really gave a great fight considering it was without Luke Sikma, Jaleen Smith, Christ Koumadje, and Louis Olinde. Maodo Lo poured in a career-high 26 points, including six three-pointers, while Marcus Eriksson hit five three-pointers in scoring 19 points. Oscar da Silva contributed 13 points, and Johannes Thiemann pitched in 12 points and six rebounds in the defeat.

In an outstanding thriller, Crvena Zvezda mts Belgrade returned to winning ways by downing FC Bayern Munich 81-78 in the Serbian capital on Friday, leaving both teams with a 7-9 record. Nikola Kalinic led the winners with 20 points. Branko Lazic added 12 while Nikola Ivanovic had 11 for Zvezda. Vladimir Lucic paced Bayern with 21 points, Nick Weiler-Babb scored 16, and Othello Hunter and Ognjen Jaramaz both had 11. Hunter also added ten rebounds for a double-double. Kalinic and Maik Zirbes allowed Zvezda to get an early 13-11 lead. Hunter and Jaramaz stepped up to make Bayern take the lead, 20-21, after 10 minutes. Weiler-Babb and Corey Walden gave the guests a 22-29 lead, but Ognjen Dobric and Lazic quickly restored a 33-31 Zvezda edge. Lucic and Weiler-Babb kept the guests within 46-45 at halftime. Austin Hollins dunked to make it a five-point game, 56-51, soon after the break. Jaramaz, Lucic, and Hunter restored a 65-67 edge for Bayern after 30 minutes. But Zvezda limited the visitors to just 5 points in the next 9 minutes, as Luka Mitrovic and Kalinic allowed the hosts to claim a well-deserved victory.