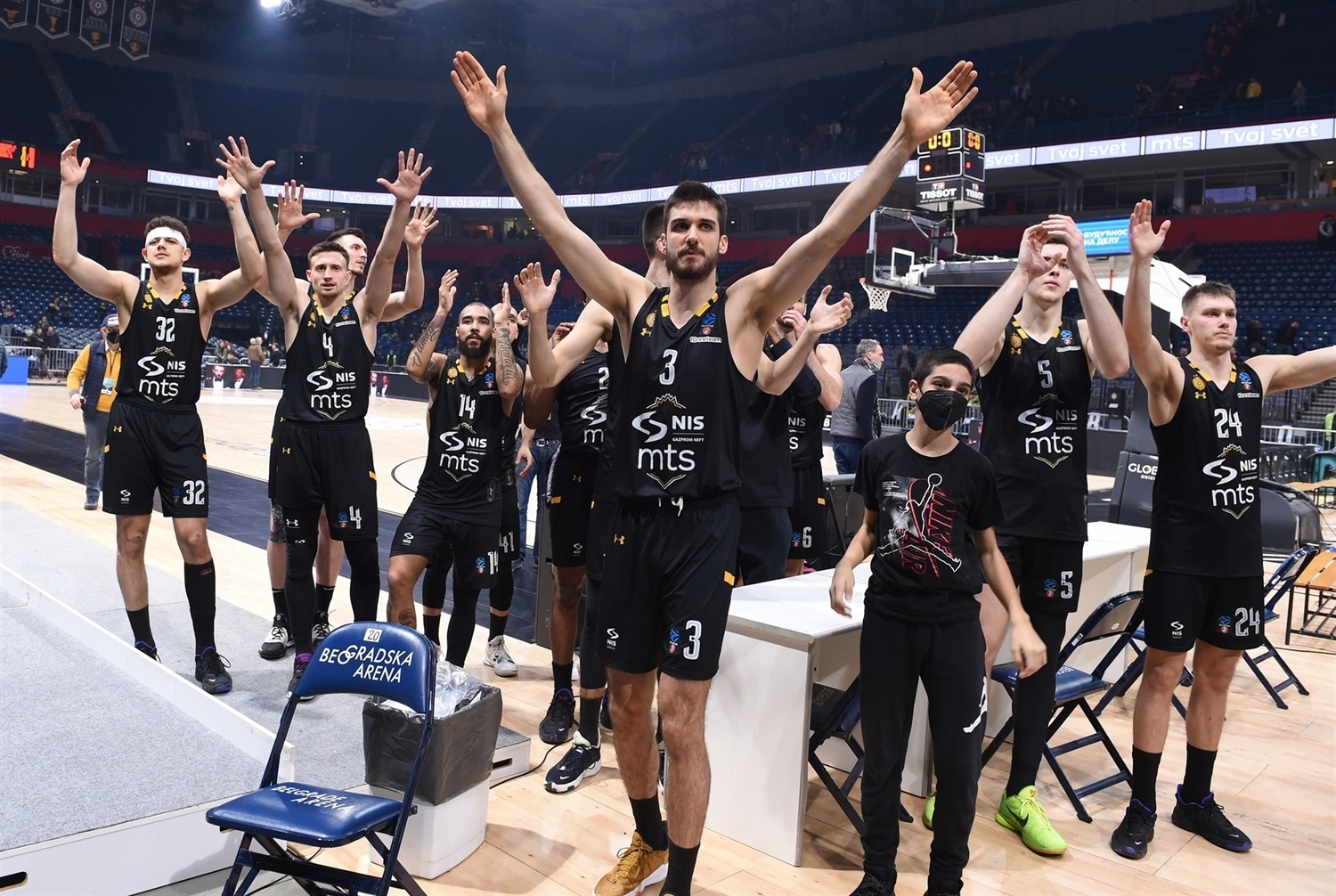 The results on Wednesday of Round 7 in the 7DAYS EuroCup Regular Season left changes at the top of both groups. Hamburg stunned Lokomotiv in Group A, and Gran Canaria left Podgorica with a road win in Group B. Accordingly, Partizan, who survived a stiff challenge from Slask, sits alone atop Group A with a 6-1 record, while Joventut and MoraBanc, which both triumphed at home on Tuesday, are tied with Lokomotiv for second at 5-2. In Group B, Gran Canaria and Virtus, which routed Promitheas, caught Buducnost for a share of first at 5-2. Round 7’s other winning teams were Turk Telekom on the road and Ulm and Reyer at home.

Turk Telekom Ankara celebrated its first road win in Group A by defeating host Dolomiti Energia Trento 70-76 on Tuesday. Turk Telekom improved to 4-3, three victories better than any of the three teams behind it in Group B entering Round 7. One of those was Trento, which fell to 1-6. Trento never trailed in the game and led by as much as 13 points in the third quarter, but still had to shake off a Trento charge in the final 5 minutes to prevail. Aubrey Dawkins had 15 points for the winners, while JaJuan Johnson added 12, Dorukhan Engindeniz 11, and Can Ogut 10 plus 6 assists. For Trento, Cameron Reynolds had 21 points, while Jordan Caroline had 20 points and 12 rebounds.

Joventut Badalona bounced back finely in rolling past Boulogne Metropolitans 92 with an 86-63 victory at home in Group A. Joventut took control of the game with an 18-3 run spanning the second and third quarters in improving its record to 5-2. Pau Ribas paced four Joventut scorers in double figures with 17 points, while Vladimir Brodziansky scored 13 points, Brandon Paul had 11, Joel Parra chipped in 10, and Ante Tomic tallied 8 points, eight rebounds, and four assists in fewer than 18 minutes. Vince Hunter was Metropolitans’ leading scorer with 19 points, Will Cummings added 17 points, and Miralem Halilovic scored 10. But that was not enough as the French side dropped its second straight game to fall to 3-4.

Morabanc Andorra claimed a hard-fought win over Lietkabelis Panevezys 81-76 at Poliesportiu D’Andorra on Tuesday night. The hosts, who remained unbeaten at home and improved to 5-2 overall, had six three-point plays in the second quarter to build a 53-40 at halftime and entered the last period leading 72-57. The visitors didn’t surrender and got within a single possession, 77-74, but free throws by Codi Miller-McIntyre and Clevin Hannah in the last minute saved the day for the home team. Drew Crawford was Andorra’s top scorer with 14 points, while Hannah netted 12 and Miller-McIntyre posted 11 points and six assists. Gediminas Orelik scored 23 points and grabbed seven rebounds for a PIR of 29, Panagiotis Kalaitzakis contributed 13 points, and Djordje Gagic added 11 for Lietkabelis, which dropped to 3-4.

Hamburg Towers collected its first-ever 7DAYS EuroCup victory at Edel-optics.de Arena by dominating the second half to defeat Lokomotiv Kuban Krasnodar 100-82 on Wednesday night. The result improved Hamburg’s record to 2-5 while dropping Lokomotiv to 5-2 and knocking it out of a share of first place. After trailing 41-50 at halftime, Hamburg dominated the third quarter 29-10, highlighted by a 16-0 run highlighted by Jaylon Brown’s two three-pointers. Lokomotiv had no answer after that. Jaylon Brown finished with a career-high 21 points on 5-of-7 three-point shooting to lead the winners. Caleb Homesley added 20 points and five assists, and Ray McCallum and Maik Kotsar scored 18 points apiece. Errick McCollum paced Lokomotiv with 27 points, Johnathan Motley paired 19 points with nine rebounds, and Stanton Kidd scored 10 in defeat.

Partizan NIS Belgrade improved to 6-1 with a battling 75-73 home victory over Slask Wroclaw, which drops to 1-6 at the bottom of Group A. Slask set the early pace before Partizan used an 18-0 run to move into a double-digit lead, but the visitors kept fighting and pulled it back to 37-35 at the break. It remained close during the third quarter, and a late 0-10 run inspired by Kerem Kanter gave Slask a late lead. But Nemanja Dangubic scored 4 points in the final 20 seconds, including a go-ahead to keep the win in Belgrade. Gregor Glas led the way with 18 points, while Uros Trifunovic scored 12. Zach LeDay and Aleksa Avramovic both netted 10 points in victory. Slask’s Kanter led all scorers with 21 points, while Ivan Ramljak and Aleksander Dziewa had 12.

ratiopharm Ulm knocked down a season-high 15 three-point shots to run past the visiting Mincidelice JL Bourg en Bresse 96-86 on Tuesday night. The win lifted Ulm’s record to 4-3 in Group B while Bourg dropped to 2-5. In the first half, Ulm pulled away to a double-digit margin behind Cristiano Felicio and Sindarius Thornwell, then never allowed Bourg to get closer than 7 points in the second half. Thornwell netted 23 points on 6-for-9 three-point shooting, and Felicio collected 20 points and ten rebounds. Semaj Christon had 13 points and ten assists while Thomas Kleipesz added 13 and 6, respectively, for the winners. Fedor Zugic also scored in double figures for Ulm with 10 points in 13 minutes. Calvin Harris and Rasheed Sulaimon each scored 24 for Bourg. Pierre Pelos had 12, and Maxime Courby netted 11 in a losing effort.

Gran Canaria defeated Buducnost VOLI Podgorica 76-83 in the Montenegrin capital on Wednesday to climb into a share of the Group B lead. Both teams now have 5-2 records atop the group. Miquel Salvo and Nicolas Brussino led the winners with 15 points apiece, and John Shurna and Dylan Ennis each scored 14 for Gran Canaria. Justin Cobbs led Buducnost with 18 points. Willie Reed added 16, D.J. Seeley 13, Edin Atic 11, and Vladimir Micov 10. A.J. Slaughter and Brussino fueled a 0-12 run which boosted the visitors’ lead to 22-36 in the second quarter. Buducnost found a go-to guy in Reed, who brought his team within 41-49 at halftime. Salvo had 6 points in a 1-10 run that broke the game open, 42-59, soon after the break, and Gran Canaria did not find much trouble the rest of the way.

In a game of swings, Umana Reyer Venice bent without breaking to register a 77-70 victory over visiting Cedevita Olimpija Ljubljana on Wednesday. Reyer improved to 3-4 in Group B, while Cedevita fell to 2-5. Mitchell Watt led the winners with 17 points and was followed closely by Michele Vitali and Stefano Tonut with 16 each, while Austin Daye added 10. Jacob Pulled had 14 points for Cedevita and Edu Muric 12, while Jaka Blazic had 10 points and 12 rebounds. Cedevita led 5-14 to start, but Reyer used a 16-3 response to lead 21-17 after 10 minutes. A red-hot Vitali shot Reyer to double-digit leads that reached as high as 19 points before settling at 45-28 for the break. Cedevita turned the tables with a 10-24 third quarter and forged a series of ties in the fourth before Daye broked the last one, and Watt led Reyer the rest of the way.

Virtus Segafredo Bologna grabbed its third consecutive win in Group B of the 7DAYS EuroCup by downing Promitheas Patras 91-72 at home on Wednesday. Virtus improved to 5-2 in the standings and a share of the top spot in the group, while Promitheas fell to 2-5. Kyle Weems led the winners with 18 points, and Amar Alibegovic added 14 for a balanced Virtus attack. Jerai Grant paced Promitheas with 15 points, and Dario Hunt added 14. At halftime, the game was tied, 43-43, before Alibegovic, Marco Belinelli, and Michele Ruzzier fueled a 22-2 run that broke the game open late in the third quarter. Little changed after that, and Virtus sealed the outcome long before the final buzzer.