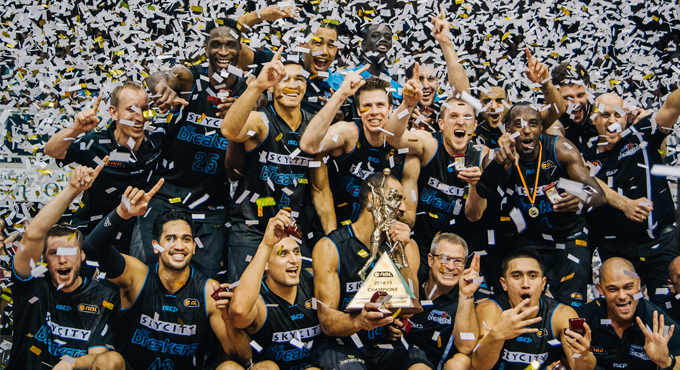 The Cairns Taipans gave it everything to force a deciding Game 3 of the Australian NBL Grand Final series but a stunning buzzer-beating jumper from Ekene Ibekwe has given the New Zealand Breakers a fourth Championship in the last five seasons.

The Taipans bounced back from losing Game 1 to the Breakers at home and then trailing the entire first half to take the leading during the second half. Firstly through Cam Tragardh’s efforts inside, and then some stunning outside shooting from Cameron Gliddon and Torrey Craig in particular.

However, Alex Loughton and Matt Burston fouled out in the final 22 seconds and those trips to the line help the Breakers regain the lead 81-79 with 17 seconds left.

The New Zealand Breakers defended the Taipans’ final play tremendously. But with just over a second left Cedric Jackson was called for a foul on Scottie Wilbekin, and he nailed the free-throws to tie scores up

That secured the 2014/15 NBL Championship for the Breakers and it continues their remarkable run having now won four of the last five titles. The Breakers won a three-peat in 2011, 2012 and 2013 before missing the Finals, and now returning in style with the Championship.

It was a heart-breaking finish for Cairns who made history right throughout the season claiming the minor premiership for the first time, recording their most ever overall and road victories in a season.

Captain Mika Vukona, Tom Abercrombie, and Alex Pledger have been there for all four of the Breakers Championships with Corey Webster now having won three titles along with Jackson. Rhys Carter also won another title after being in the losing Grand Finals teams the last two years.

Jackson was awarded the Larry Sengstock Medal as the Grand Final MVP for his remarkable series and it continues his brilliant run in the NBL where he has won a Championship in all three of his seasons. He spent last season in Europe following the 2012 and 2013 Championships.

The New Zealand Breakers got on top early with Abercrombie and Jackson taking over the game combining for 14 points and only two buckets to Weigh was able to keep the Taipans within eight points.

Tragardh and Craig did help the Snakes get back to within two points, but Webster returned after picking up two early fouls and made two late buckets to see New Zealand still lead 23-17.

Loughton picked up his third foul early in the second period for Cairns and didn’t see any action again for the half, but the Taipans were still able to keep in the contest.

Despite Jackson taking over much of the second quarter with a couple of threes, another basket and some superb assists including one to set up Vukona for an open one-handed dunk, the visitors wouldn’t go away.

A couple of baskets in succession to Shaun Bruce, and five late points before half-time to Gliddon saw New Zealand’s lead cut to five at the break.

The game became an inside battle for most of the third and that ended up suiting the Taipans with Tragardh taking over. He scored the first eight points of the quarter for the Snakes even though Ibekwe, Vukona, and Wesley were trying to match him at the other end.

By the time Weigh hit a triple with just over a minute to go, Cairns had its very first lead of the game.

The Taipans still led by a point heading into the fourth and unlike the third period, the Snakes started nailing their shots from outside the arc.

Captain Gliddon nailed two of them, and Bruce and Craig one apiece and the Taipans’ lead got out to six points with the very real prospect of a Game 3.

However, the Breakers refused to go away and with Webster and Wesley nailing big baskets, Abercrombie a three and a Vukona put-back the home team had tied scores at 78-each with 45 seconds left.

Tragardh nailed one of his two free-throws and Jackson one of his two after Loughton fouled out, but the Breakers managed to get the offensive board and then eventually Burston was called for a foul on Vukona.

The New Zealand Breakers captain nailed both to tie scores and then despite some strong defense, Wilbekin was fouled with just over a second to go and he tied scores up at the line.

Jackson found Ibekwe on the in-bounds pass, and he created an NBL moment for ages with a stunning match-winning jumper over the top of a desperately lunging Weigh and the North Shore Events Centre went crazy in celebration of another Championship.