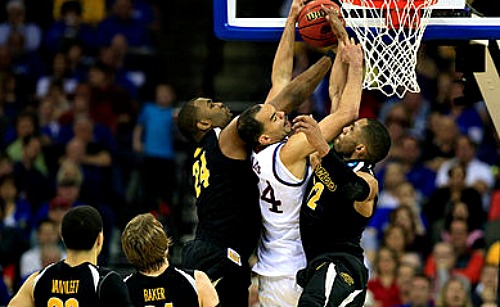 The NCAA March Madness is perculating to higher temperatures as the last eight teams secured their seats to the Sweet 16. There were a couple of teams that pulled off some shocking upsets as they moved on. This is the second straight year the Michigan State has dowsed the the flames of the University of Virginia. The Wichita State shockers jolted second-seeded Kansas to continue their hunt for NCAA gold. Some results were far less surprising, as solid favorites Gonzaga and Wisconsin advanced by taking care of their match-ups.

Coach Rick Pitino and his Louisville Cardinals are headed to yet another Sweet 16 appearance for a fourth straight year. Terry Rozier led Louiville with 25 points and seven assists. Despite not being favored to take down Norther Iowa, the Cardinals used some excellent defense to carry them through. Louisville shot the ball well, but they will need to dig deep and find a way to do it again when they face North Carolina State. They do, however, know that they’ve got the defensive strategy to lean on while they wait for opportunities on offense to arise.

This was another game that was won on defense. Oklahoma was able to stifle Dayton and climb back from a first-half deficit to book a date with Michigan State in the Sweet 16. The Sooners had nine steals and three blocks to anchor their comeback. They also crashed the boards hard and did their best not to waste second-chance points. They managed to limit the Flyers’ leading scorer, Jordan Sibert to only seven points. This is the first time the Sooners are making it out of the tournament’s first weekend since 2009.

Led by Travis Trice the Michigan State Spartans stayed aggressive throughout the game and held on to the first-half lead they built en route to a glorious win. Trice got hot from downtown (4-8) and finished with a game-high 23 points. He shot an efficient 7-of-15 from the field and 5-of-6 from the line as Virginia could not find an answer to his explosion. On the flip side, the Cavaliers could not buy a bucket for most of the game. As a team they ended up knocking down just 2-of-17 from beyond the three-point arc. Their offense was all over the place, which translated to a dismal 29.8% shooting from the field. The sixth-seeded Michigan State will be facing Oklahoma in the next round.

The final remaining game in the Midwest region did not disappoint. This was one of the more stunning upsets that took place over the first weekend. The Shockers rained down one long bomb after another to pound second-seeded Kansas into submission. All of Wichita State’s starters finished in double figures as their team effort on offense really shined through in this game. Tekele Cotton led the Shockers with a game-high 19 points. Teammate Fred VanFleet was impressive on both ends of the court and he ended the night with 17 points, six boards, six assists and four steals. The Jayhawks will have to wait till next year to make another run at the title. Wichita State will need similar games from VanFleet and Cotton if they hope to upset Notre Dame.

Underdogs West Virinia took their “not-so-pretty” style of basketball and made it work against fourth seeded Maryland. West Virginia’s Devin Williams was dominant with a double-double performance. He put up 16 points on the scoreboard while also securing 10 rebounds. The Moutaineers’ 15 steals for the game was instrumental in shutting down the Maryland Terrapins. They played better basketball that night and were rewarded with the opportunity to face the undefeated Kentucky Wildcats in the next round. While the Wildcats are obvious favorites, expect West Virginia to come at them with their junkyard dog-style of tenacious basketball.

The number one seeded Wisconsin Badgers were a bit off on offense, but they were able to do enough to put away the Oregon Ducks in this encounter. Despite some poor shooting on the part, the Badgers still got off to an early lead and held on for the win. They overcame a fantastic game from Oregon’s Joseph Young who piled up 30 points for the game. His one-man show was not enough to keep up with Wisconsin’s balance albeit inconsistent attack. Sam Dekker and Frank Kaminsky combined for 33 of Wisconsin’s 72 points and carried their team for key stretches.

The South region’s number one seed Duke University made it clear that they are a team to be reckoned with in the 2015 NCAA Tournament. Anchored by talented big man Jahlil Okafor, the Duke Blue Devils took care of business with an early first-half lead and did not look back. Okafor showed off more of his polished offensive moves as he dominated with 26 points. The Aztecs could do little to stop the league’s top player as he scored virtually at will with his 12-of-16 shooting from the field.  Okafor and company are ready to face Utah on Friday.

The Gonzaga Bulldogs are out of the doghouse and finally got passed the first weekend for the first time in five years. Zags’ Kyle Wiltjer has remained the most potent weapon in their arsenal. He finished with a game-high 24 points and was nearly unstoppable as he scored from all over the court. He and teammate Kevin Pangos accounted for eight of the Bulldogs 10 shots from downtown. Gonzaga sat comfortably on an 11-point lead for most of the game and the Iowa Hawkeyes could not find answers to cut down the lead during the game.