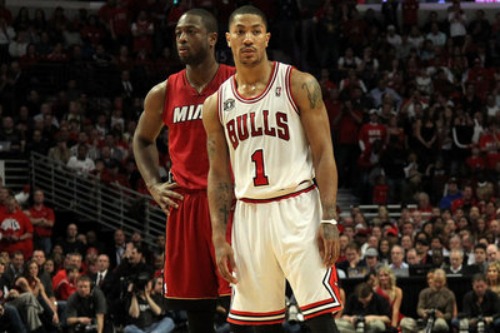 The NBA 2013-14 season is officially underway! The league kicked things off with three games, an Eastern Conference rivalry, a Los Angeles rivalry and a finally a clash between two of today’s young and promising big men. Derrick Rose returned to face the defending Champions, Miami Heat. Rose missed the entire 2012-13 season as he recovered from surgery to repair his torn ACL. The Los Angeles Lakers were without their star Kobe Bryant and they could possibly have to play without until Thanksgiving. They faced a tough opponent in the Los Angeles Clippers who were led by Chris Paul and Blake Griffin. Georgetown alum Roy Hibbert faced off with up and coming Montenegrin import Nikola Vucevic in an Eastern Conference duel between the Indiana Pacers and the Orlando Magic.

Right after the Miami Heat their Championship rings for the 2012-13 NBA Title, they welcomed back one of the best point guards in the NBA, the Chicago Bulls’ Derrick Rose. The former MVP showed some rust as he finished the game with just 12 points in 34 minutes of action on the court. We can chalk that up to rust, which we expect him to shake off as soon as he gets more games under his belt. Miami’s Mario Chalmers was not about to let him come back with a bang, but instead clamped down on defense and even finished the night with five steals to show for it. The Bulls were instead led by veteran forward, Carlos Boozer and his game-high 31 points. Jimmy Butler, who emerged as force for the Bulls last season, continued where he left off and capped of his night with 20 points, three assists and five steals.

Miami was there to make a statement. Yes, we are the back-to-back Champs, but we’re not going to rest on our laurels and in fact want it known that we’re here to win it all. Again. LeBron James led his team with 17 points, six rebounds and eight assists for the night, while Chris Bosh chipped in 16 points and six boards of his own.

Indiana’s Roy Hibbert was a beast as he out-dueled Nikola Vucevic in the paint. Hibbert scored eight points but grabbed a game-high 16 rebounds and was monster on defense with seven blocks and one steal. Roy is reaping the dividends of cutting some weight over the off-season and working out with All-Star forward Tim Duncan. Paul George, Indiana’s star player, was up to the challenge and led his team with a stat-sheet filling line with 24 points, six rebounds, five assists, three blocks and one steal.

Canada’s Andrew Nicholson erupted early in the first half of the game for Orlando and finished with 18 points in only 19 minutes off the bench. Many eyes were focused on rookie Victor Oladipo, who was selected by the Magic second overall in the 2014 draft. He played 23 minutes coming off the Magic’s bench and finished the game with 12 points and two assists, which wasn’t a bad game for his first outing. Orlando intends to play him at both guard spots this season and his grooming him to become an all-around effective point guard in the future.

The Los Angeles rivalry has picked up steam ever since the Clippers got the commitment of superstar point guard Chris Paul for the long haul. This was clearly an upset considering the Clippers depth on paper and the glaring absence of the Lakers’ best player, Kobe Bryant.

Despite the Clippers starting frontcourt of Blake Griffin and DeAndre Jordan putting up a solid night, scoring 19 and 17 points respectively, the Clippers were not able to contain the Lakers’ reserves, five of whom finished the game in double figures. It was shocking how the second unit put so much effort in grabbing the “W.” Journeyman guard, Xavier Henry erupted for 22 points and six rebounds, leading all reserves. They were so effective that coach Mike D’Antoni did not bother playing his starters in the last 15 minutes of the game.

“It’s not a bad thing to be the underdog sometimes,” said Jodie Meeks, who scored nine of his 13 points in the fourth quarter. “No expectations. We go out there and play hard. What’s the worst that can happen? We lose, and people say we’re no good?”

The great effort of the Lakers showed that the game isn’t “played on paper,” and it sometimes boils down to who wants it more. The upset handed newly acquired Clippers coach Doc Rivers his first loss.